Teacher Stern, accused last week of cancelling Easter, is under attack from a toilet terrorist.

The firm has sent out "repeated" emails begging the unidentified employee to stop wrecking the men's loos, a source said, and has had to shut stalls after he made them too unpleasant to use.

"I have just been told by 2 members of staff that one of the cubicles in the First Floor Gents has been left 'in a disgusting state'", wrote the office manager in an email to staff, "and have arranged for it to be put 'out of order'".

Complaining that it was happening "quite frequently," she pinned the blame on an employee. "There have been no visitors today", (sad face), "so clearly it is one of our colleagues!"

"There's talk of someone staging a dirty protest", said a source. And how. "Someone found a used condom on the floor", said an insider. "And toilet brushes have been left in the toilet - wedged in the central hole". Sleuthing staff established a WhatsApp group tracking the perpetrator's misdeeds, and even captured some of his loo brush handiwork: 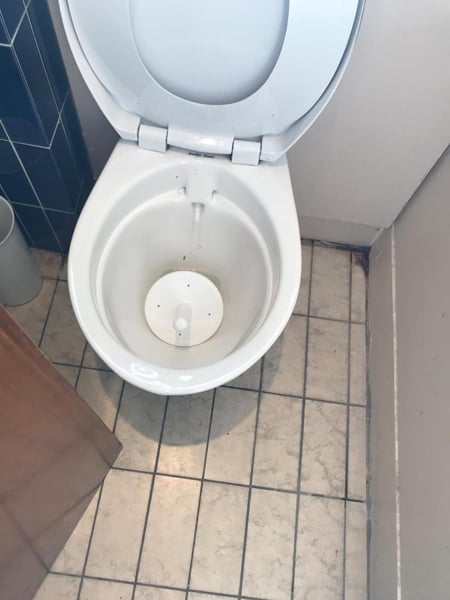 The office has also suffered from a cockroach problem, which managers pinned on the lawyers. They claimed staff were bringing the bugs into the office via their Sainsburys salads. 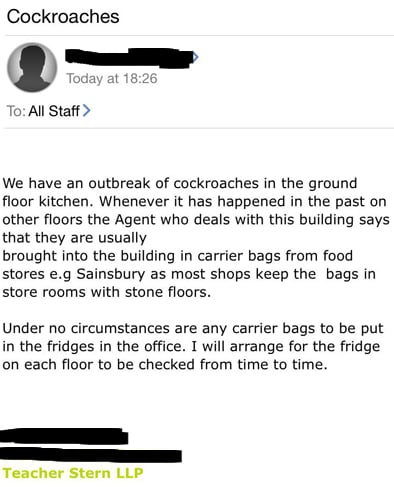 Teacher Stern has encountered more than its fair share of issues with the facilities. Last year one of its male staff ignored warning signs and pissed on a plumber who was mending urinal pipes. Amongst the cache leaked (sorry) to RollOnFriday were more details about the incident. An email sent to 'Gentlemen' at the firm and headed "Shame on whoever is guilty' reveals how the workman was "soaked" with urine and had to go home.

Due to her omission of a comma, the manager appeared to accuse someone named George of being the lead suspect. She ended her email, "George, the plumber said when he shouted whoever used it ran up the stairs". Leading an associate named George to reply, "Certainly was not me, and do not appreciate the insinuation it was".

Before the firm was made aware that RollOnFriday was in possession of emails and pictures supporting the allegations, a spokeswoman for Teacher Stern said, "As with your recent story regarding Easter Eggs, we’re not sure where these latest claims are coming from as they are simply not true. We certainly haven’t had any of the problems you describe, as amusing as they seem". After being shown the evidence, the firm did not provide any further comment.

Question the veracity of the story; then, when busted, go silent. Heh! Great PR.

In fairness - surely isn't part of the problem that the office manager is clearly somewhat gullible: "yea the landlord says its nothing to do with him, its because you keep going to the supermarket!"  ::cough:: bullshit ::cough::

I have literally in over 30 years NEVER seen a cockroach anywhere near a plastic bag from a supermarket... surely if that were a plausible explanation we would all be literally infested with cockroaches???

Ridiculous story once again. Your 'source' needs to get a life....

Lol RoF - give us some proper stories which people want to read. Your source is a low life who has nothing better to do (sad they spend their Thursday night prepping for these stories...) and obviously has some grudge against the firm in question which they can’t move on from...

"As with your recent story regarding cancelling Easter (we of course have no way of doing that) we’re not sure where these latest claims are coming from (but we hope to find out) as they are simply not true*.  We certainly haven’t had any of the problems you describe, as amusing as they seem", said William Barr on Teacher Stern's behalf, shortly after he had finished telling the Senate Judiciary Committee that, notwithstanding the ripping letter he had received from Mueller and hidden, that he had no idea what people were talking about when they reported that Mueller's team were concerned that his summary was BS.

"pissed on a plumber" is one of the best things I've ever read!

What a laod of shit, is someone taking the piss?

It seems a bit ridiculous that stories of this nature keep being posted, especially when they are obviously coming from one disgruntled ex-employee.