Staff at Bird & Bird have offered up thanks for their sparkling sanctuaries, voting the firm's loos the best in the UK in the Firm of the Year 2019 survey.

Bird & Bird landed top of the squats with 88%. "Best loos in town by far" (F). "A shining porcelain beacon" (M). With floor-to-ceiling doors and improved air freshener scents, visitors "can drop a duce in luxurious style" (M). "We essentially have the real-life equivalent of the Super Toilet from Theme Park. All said and done, a really good dump" (M).

Shearman & Sterling's facilities ticked all the boxes for its staff. "Decent acoustics (thick walls), decent temperature, never crises re loo roll, all in all quite pleasant", summarised a trainee (M). The only shadow was cast by the "weird tech-company people" with whom the firm shared the loos, and which meant "crisp-eating and spitting whilst at the urinals is now the norm".

"Somebody on the fourth floor appears to have chronic irritable bowels", said a junior solicitor (M) at Burges Salmon, "so certain cubicles are to be avoided, but credit where it's due, they are cleaned meticulously every day ready for the pebbledasher to attack again". The Bristol firm cleaned up in third place, with minor quibbles from a partner (F) that the lighting was "very harsh for an old person, shows all my wrinkles". 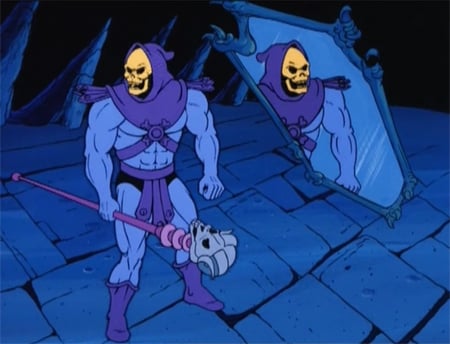 "You all get this too, right?"

Slaughter and May performed excellently, hitting 77% despite complaints from a junior solicitor (M) that the 4th floor loos, occupied by disputes lawyers, "are unbearable. Very poor snipers and excessive 'sliders' make for an unappetising toilet experience."

An illuminated make-up mirror made the Mills & Reeve client loos in Norwich "luxurious", said a senior solicitor (F). But loo roll, said a paralegal (M), was "so tracing paper thin yet sandpaper rough it's a scientific breakthrough". He gave a 'poor' rather than 'dreadful' rating because the cleaners "do a brilliant job and keep it sparkling clean". "Almost cleaned too regularly", said a junior solicitor (M) " - keep getting interrupted mid-plop".

Staff at TLT were delighted with their refurbished commodes. "They were appalling", said a TLT partner (M), but have been "entirely revamped". Urinals are now a thing of the past, just watch out for the cubicle withe the broken lock known as the "danger toilet". 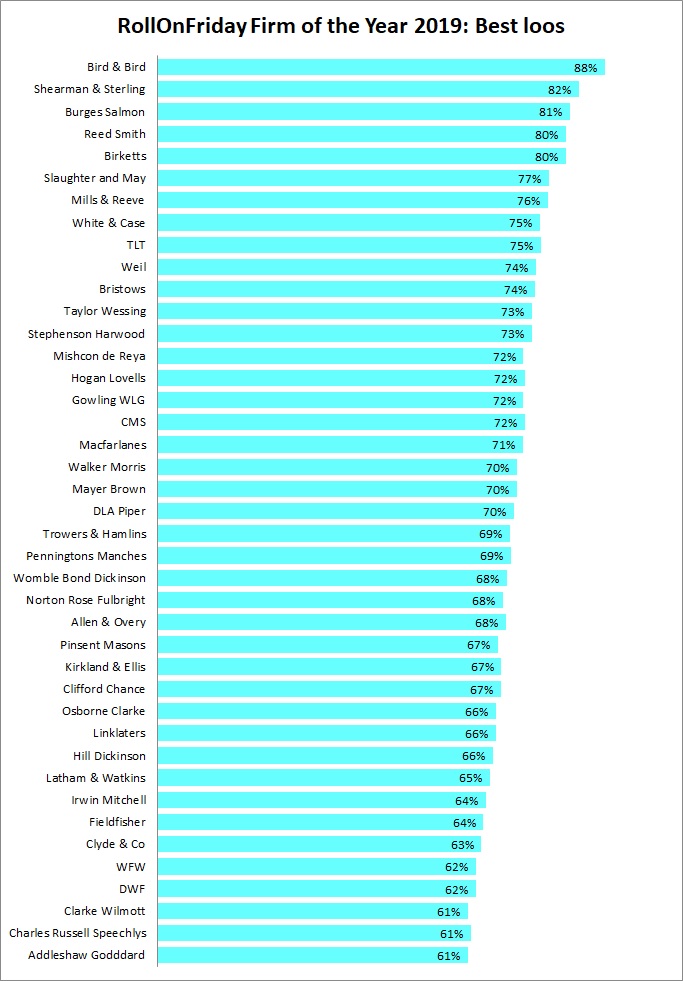 "I'm writing this from the loo", disclosed a Gowling WLG trainee, "and having a generally pleasant experience". A colleague, possibly in the next stall, described "beautifully low lit cubicles that are sealed from floor to ceiling, creating a very zen-like personal space. It's one of the highlights of the day".

New loos at Hogan Lovells also got a big bums-up from staff. "The refurb has resulted in lighting which doesn't make you look quite as translucent/dead as it did", enthused a junior solicitor (F). "Floor to ceiling doors make the bogs a safe enough place to sleep off a rotten hangover", vouched a peer (M). "And there's no 'wall smearing' in sight". Good to know. Too few responses were received from Debevoise & Plimpton to enter it into the results, but according to a senior solicitor (F), "one summer there was excrement caked on one of the cubicle walls for about 10 days".

Despite a solid 70%, DLA Piper had room for improvement as far as one solicitor was concerned. "We share loos with corporate", they said, "and often the smell of just pure, unadulterated shit emanates out of the toilets and floats down the corridor toward the post boy who sits right outside the door to the loos (poor sod)". On top of that, the "low long pan (imagine the old Gillian McKeith toilet that let hapless TV-wannabees review their poos) appears to mean that there is an unofficial 'who can make the longest skid mark' competition going on". Others said the new office design was "brilliant", and a trainee's only complaint was that a "particular partner should probably be taught to wash their hands after going to the bathroom".

"I was once sitting quietly on the loo and heard someone in the next cubicle repeating 'just kill me...just kill me...' for a solid minute", revealed a junior solicitor (F) at Allen & Overy. "But the loo itself was nice enough". At fellow Magic Circle firm Clifford Chance, "there's a sign above the flush handle saying 'depress gently'", divulged a member of staff (M). "It's become a mantra for living". At Linklaters the "knock-off Dyson air-blades" were "insanely loud and take about 2 minutes to dry your hands", said a junior lawyer (M). It led "to a regular conundrum of whether to awkwardly wash your hands for an extended period of time whilst you wait for the person in front of you to finish, or just wipe them on your clothes and leave".

US firms also had their critics. Latham & Watkins' bogs were marked down because "the other day they all stopped flushing", said a senior solicitor (F). "Every single toilet in the building. It was like a scene from a Bangkok backpacker hostel - so grim". Its lavs were also accused of being too swanky for their own good. Staff had to guess the location of the automatic taps "because the architects recessed them under long mirrors".

Flash bogs that looked great on paper also drew some criticism from staff at Watson Farley Williams. "They're shitable now", said a trainee (M), which was "a vast improvement". But they were, said a female solicitor, "clearly designed by a man or an unusually tall woman".

Hanging on in the premier toilet league was Charles Russell Speechlys with 61%. The split between its legacy firms’ staff may have healed in the open, but tensions were alive and well in the ladies' loos. One junior solicitor (F) claimed the women "seem to know how to behave themselves". But another woman disagreed. "It is not the company's fault that other members of staff are disgusting scumbags who shit on the seat", she said. Gulp. "I often have a little snooze on the floor", offered a blissfully unaware male colleague, "with a snuggly blanket of soft toilet paper".

It gets worse from here. 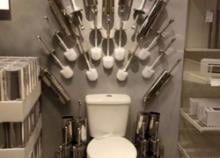 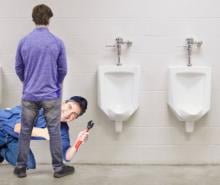 Not particularly surprised that a two birds lawyer doesn't know the difference between a deuce and il duce.