Norton Rose Fulbright staff have revealed that however City they appear now, their first jobs were as diverse as 'tour guide for a tin can castle' and 'corpse'.

Unbeknown to most outsiders, NRF publishes its own in-house magazine, 'RE:'. The letters page of the December 2019 edition demonstrates that within the firm, its best kept secret has a dedicated fandom.

"I thoroughly enjoyed reading in the last issue of the magazine about the railway adventures of my fellow colleagues", wrote Jenny, "It reminded me of my visit to [continues]". "The serendipitous joy of returning from a difficult meeting to discover another edition of RE:", praised Scott. "The savouring began on page 01. And I paused to wonder: monochrome inside covers, but why?"

The stand-out feature of the latest edition is NRF employees describing their first jobs. It "feels like it should be a very lengthy bit of human interest fluff", said a source, "but turns out to be a series of absolutely deadpan oddness". 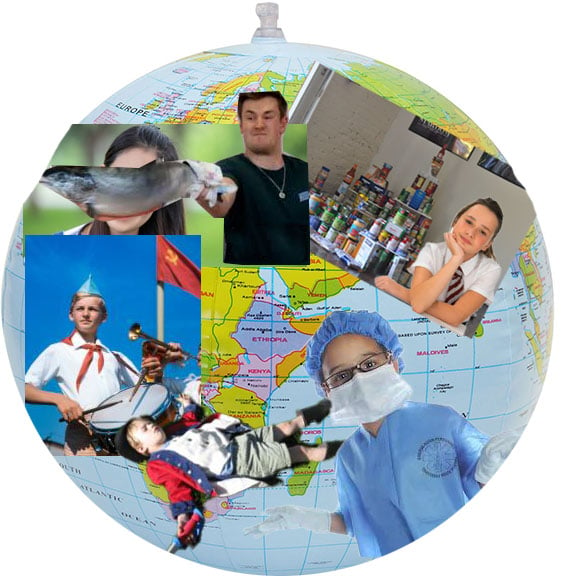 One entry finds a competition associate in London recalling how he played a dead boy. His description of his mentor leaves a lot unsaid, yet still manages to paint a tragic picture. 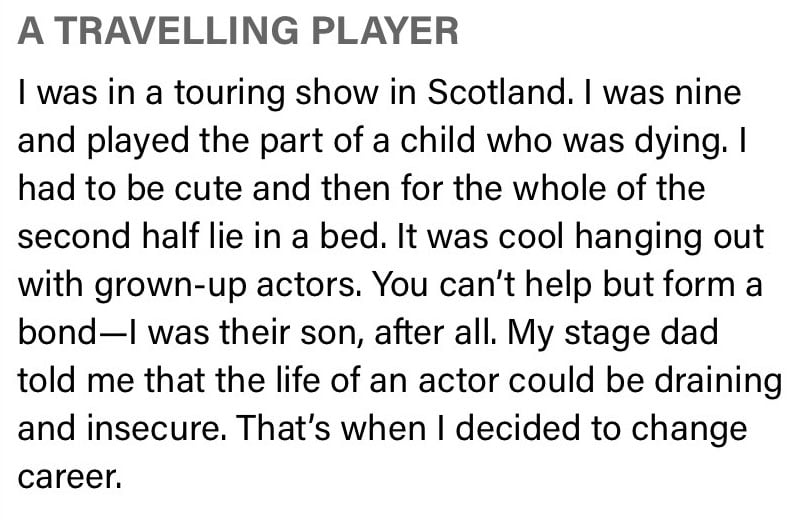 A Norton Rose Fulbright translater in Quebec guided the rare tourists to her village around its 'castle'. The fact she hasn't forgotten the exact number of 'bricks' indicates the level of trauma involved. 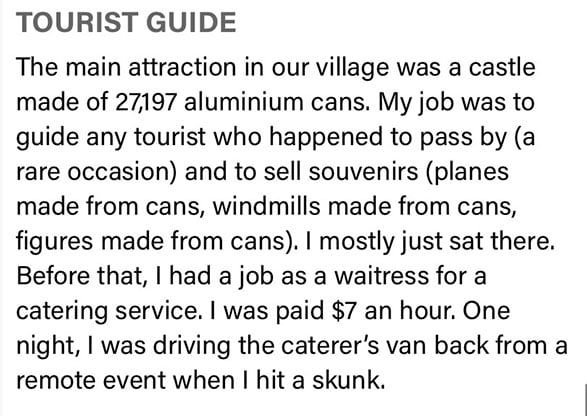 Natalia, a business adviser in Moscow, does not explode any stereotypes about Soviet Russia. 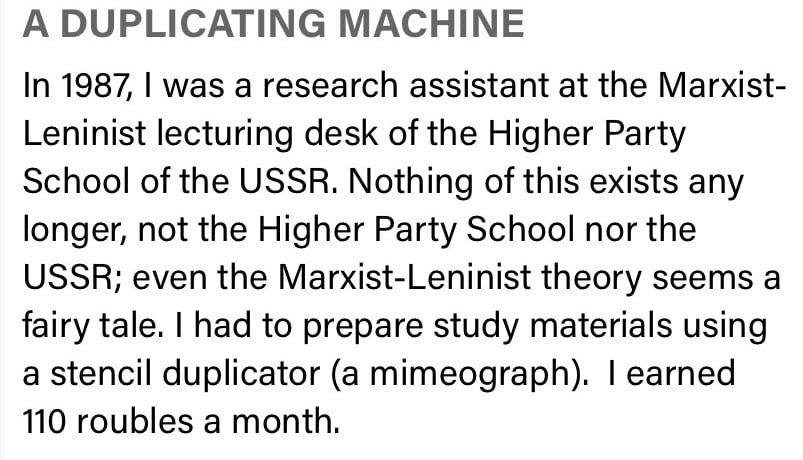 The editor's entry swings seamlessly from Merchant & Ivory to assault by seafood. 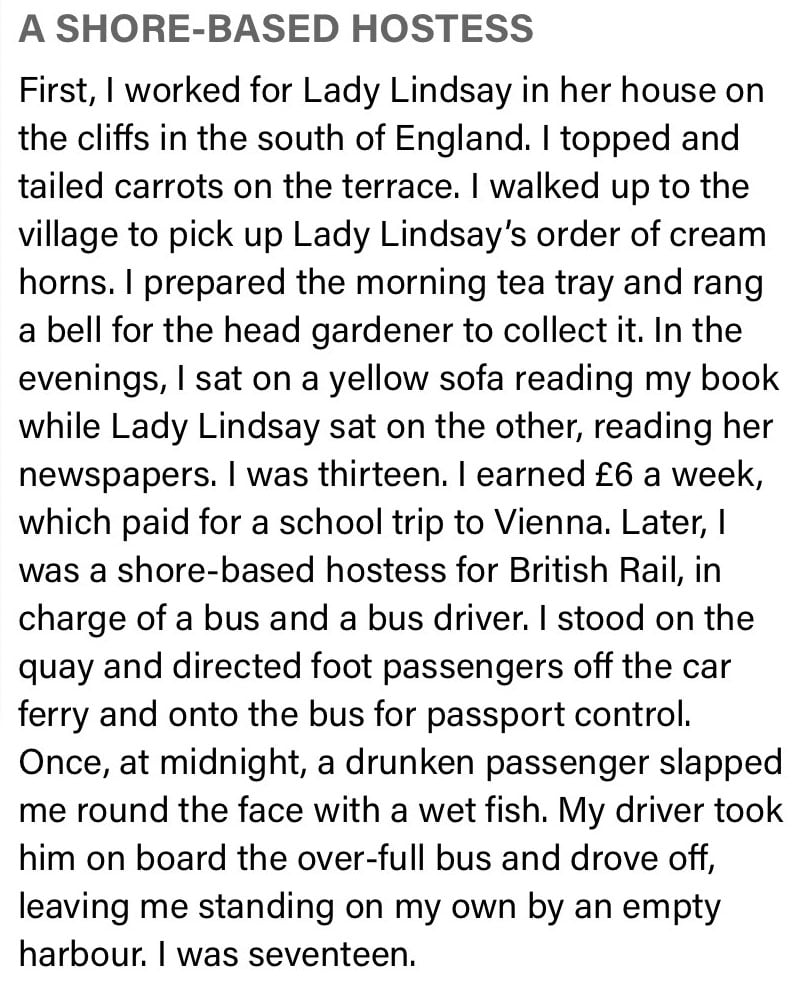 Apparently, not all children in Amsterdam start out pre-rolling naughty cigarettes for tourists. Some are plunged into gore.

Like the Dutch banking lawyer's entry above, the Beijing office manager sounds unnervingly like she's testifying about historic abuse.

Did you start on your path to law after fabricating fertility sculptures for your hamlet's summer fayre, or unloading stolen goods in the dead of night? Let RollOnFriday know, or point us to more strange stuff in your in-house mags.

My own is quite boring in comparison: First job was temping for Office Angels. They put me with a headhunting firm, where my job was to scan CVs into an old 386 PC (This was 1992 or 1993, I think) and attach each one to an entry on a database. Databases were cool back then. Some of the CVs were a joy to behold. My particular favourites, given that this was for executive positions, were the ones written in pencil on spiral bound A5.

I had never used a PC before. I was brought up on Spectrums, Commodores and Amigas. One day, Windows flashes me up a warning: "Hard Drive Full. Delete something to make some space."

"What should I do?" I ask my attractive Scandinavian boss. "Just delete anything that looks full" she shouts across the office.

Within an hour, I was given the keys to the big boss's Volvo Estate and was bombing down the M40 at 100mph to Oxford to get the PC fixed. I was revelling in the speed as my car at the time was my grandmothers 1976 VW Polo which would have shook itself into oblivion at anything above 40mph.

They kept me on, anyway. And after that I made it my business to learn as much about PCs as I could.

Pre doing the CPE I responded  to a v anonymous clerks job advert in the Evening Standard, led to a very interesting 6month stint in the Private Office of the DPP

My first job was as a barmaid in a pub on Bishopsgate - it's not there any more. I worked there full time for 8 months. We had an interesting mix of patrons - traders (generally fairly horrific; some ok) and builders and fitters working on a big construction site next door (mostly nice enough, some a bit rough - but generally less problematic than the traders).  This was back in the late 90s - lots of excess and having it large.  Things have definitely changed since then.

I remember having to tell people (traders) to be more discreet passing wraps under the table or we'd have to ask them to leave and a guy (trader) who got really wasted and took his trousers off standing on a table.  I remember a group of guys (traders) laughing about a time one of them had got so wasted and gone back to the floor that he'd had to chunder in a waste bin in the corner. Ladz, eh?

Also had the worst ever chat up line (from a trader) - you remind me of my daughter, do you fancy a shag? 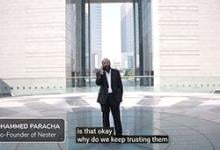