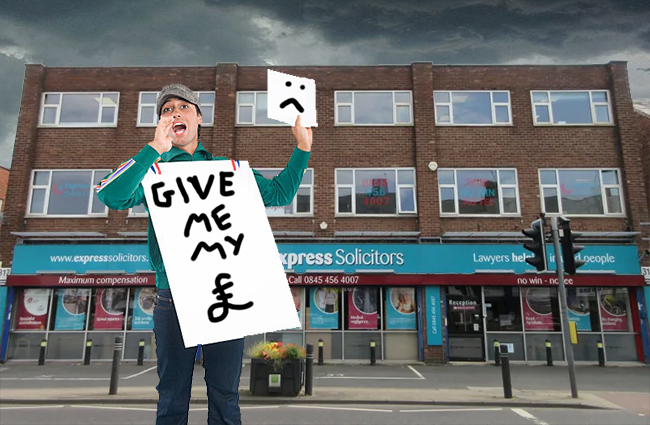 Under siege, Express Solicitors would later despatch a partner to conduct talks.

Stop the Oil chucked soup, Animal Rebellion poured milk, and now a former client of Express Solicitors has donned a placard accusing the Managing Partner of taking an unjustifiably large cut of his settlement.

Staff at the personal injury firm watched in dismay as the man arrived outside their Manchester office last Friday afternoon with a large sign hanging around his neck.

James Maxey is the Managing Partner of Express Solicitors, which he founded in 2000, and his firm now employs around 400 people.

Staff soon received an email from Maxey advising them, "He's harmless and best to just leave him to it", although it warned them to speak to a partner if "he gets in any way aggressive".

Maxey, who was working from home at the time, informed Express staff that a partner had approached the gentleman and "smelt alcohol on his breath so he must have had some Dutch courage", adding that the protestor "clearly doesn't understand client deductions!" 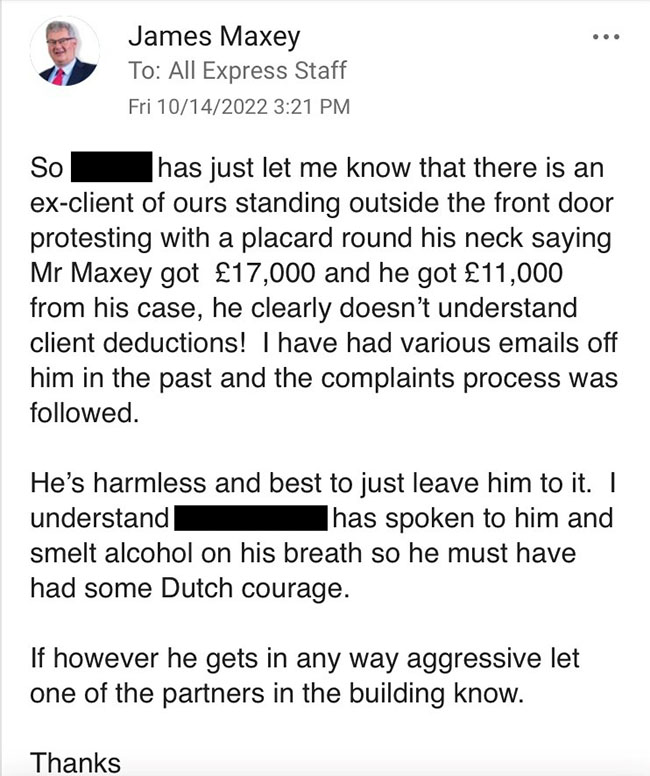 Cos the partners are well 'ard.

The man stood outside with his sign for over three hours in the rain, and was still there when people left work at 5pm.

Maxey's response upset some staff who said it wasn't very sensitive to their clients' personal circumstances. "As you can see from the email, there’s a reference to the protestor having drunk alcohol, like it’s something to laugh about", said one person. "A lot of our clients are vulnerable members of society in that they have issues with alcohol and/or drugs, they are from poverty and low income backgrounds, or they are not the most intelligent, or some absolutely have serious special needs".

But Maxey told RollOnFriday that his PA wrote the email, not him. "My concern was for staff safety", he said, "so I asked her to send an email".

"It seems that one of the other partners had been out to talk to the chap, in a friendly way...he must have made some comment about the guy drinking, and my PA decided to put that in the email. I didn't dictate the content of the email other than to say 'reassure the staff and let him carry on protesting'".

Deductions comprise all the sums taken off a client's compensation if their claim is successful. Express Solicitors charges a deduction of 25% plus VAT as a success fee, but the deductions can climb to over 50% when the cost of After the Event Insurance and the 12% Insurance Premium Tax is taken into account. The protestor had unsuccessfully sued Express Solicitors over his deductions, ROF understands.

A source said the objections from clients were not a total shock. "When we eat more than 50% of their compensation, we are forced to shrug with a response of, 'Well, you agreed to the deductions at the opening of your case!'"

However, Maxey explained that of all the deductions, "only one of those is going to my law firm, and that's the legal fees", which are met out of the 25% success fee. As for ATE, "the principle of having After the Event insurance is very important for clients with a no win no fee case", he said.

The Express Solicitors boss also rebutted a source's suggestion that he had emailed the office from his boat in Antibes. "It's kind of galling when people say 'he's on his yacht in the south of France', I'm a lifelong boating enthusiast, I started in tiny boats, I went to the local comprehensive school, I built my first sailing dinghy, and I'm a 52-year-old partner in a law firm, and I've been able to buy a second-hand motorboat. I don't have a crew on it, I clean it myself. I'm not a Russian Oligarch - I'm not poor either", said Maxey.

Classy to chuck the PA under the bus.

Man protests about being held to agreement he voluntarily entered.  Boo hoo.

If you allow your PA to draft emails that go out in your name to all staff without any further checks then that’s on you, as the head of a law firm. You have to take responsibility for the content. What a ****.

This is why some law firms have PR and media relation departments.

James Maxey thought his restored 52ft displacement trawler yacht was the perfect yacht for him, until an Aquastar Explorer 74 came along and changed everything.

If his PA had authority to send this on his behalf without him reviewing it (which seems unlikely, especially with so little purported dictation) then it is his responsibility. Blaming them is abysmal conduct

What evidence do you have that I ever agreed to let you take a deduction from my damages?!

Interesting: just had a quick google and these little motorboats are over £600k... takes a lot of success fees to generate that kind of scrilla

The phrase 'Dutch Courage' was new to this Dutchman. Needless to say it will be heard every Friday from now on.

Letting your PA cop the blame is WEAK!

Not small boats, either:

Hardly a little put-putter for the Norfolk Broads!

‘He clearly doesn’t understand…deductions’ - surely it’s the lawyer’s job to make sure the client understands deductions….

We take all the risk, you pay nowt if we fail, you get cash less deductions if we win.  What’s the issue?

Why does this article comments suddenly have three times as many downvotes as other articles published last Friday?  Hmmm nothing fishy about that at all, Mr Maxey.

@Yours anon - what proof do you have that this article has three times more downvotes than other articles published on the Friday previous to the one that we are allegedly due to undergo at the conclusion of this particular week?

I wrote the email and this is all my fault

#erm, the number of downvotes. Next question please!