Cleaning staff protesting outside Addleshaw Goddard's London office this week were so loud that lawyers across the road at Slaughter and May had to abandon their rooms.

The cleaners brought an industrial-strength siren to compensate for a low turn-out and let it rip. The Monacor TXM-48 Megaphone was so effective that Slaughter and May had to empty its client meeting rooms.

"They had a siren wailing for hours in Chiswell Street", complained a source at Slaughter and May, "meaning we had problems with client meetings". It was "like a bombing raid was going on", they said. A colleague likened it to the "loudest fire alarm on earth".

But, said a source peeking across the road, "It was pretty embarrassing for the Addleshaw lawyers who had to walk past the protesters to get into the office". 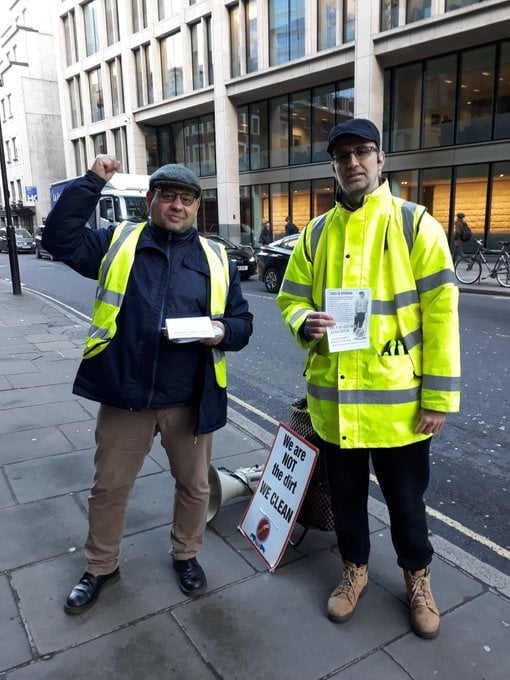 Outside Slaughter and May.

Inside Slaughter and May.

The cleaners were demonstrating against Addleshaw Goddard's suspension of a night shift cleaner identified as 'Efrain', who is a representative for the Cleaners & Allied Independent Workers Union.

Addleshaw Goddard outsources its cleaning to Incentive FM Group, which has been locked in a dispute with CAIWU for two years over pay and conditions. The firm told RollOnFriday that Efrain's removal from active service was “a private disciplinary matter between Incentive FM and their employee and therefore not one we will be commenting on.”

As far as over-the-road issues between firms go, it could be worse.

It was "like a bombing raid was going on",

Addleshaws building has double glazing, it was quiet inside. Maybe the hard pressed partners at Slaughters should invest in a better building. I am starting a Just Giving page for them, anyone with me??

Good on the cleaning staff.