Just five firms scored less than 50% for career development in the RollOnFriday Firm of the Year 2020 survey.

"While personally I am on a track to promotion", said a junior solicitor at Clyde & Co (49%), "I have seen senior members of staff shafted, and the process to becoming partner can only be described as chasing a set of goalposts which are being dragged to different positions every year faster than Usain Bolt".

Freshfields (49%) was the worst-performing Magic Circle firm when it came to satisfaction with career development. "Good training and exposure. Work with (and learn from) extremely capable people", said a lawyer there. "If you want to end up in-house there is no better place to be". But "nobody understands the career milestones system", said a peer. "We'd all reached a tacit acceptance that it was effectively arbitrary", they said, "in the sense that you'd be promoted through the system every other year (mysteriously being ‘at expectations’ every non-promotion year and then ‘above expectations’ the next). But now, particularly at senior associate level, it seems to be used to hold associates back at the department's convenience".

"Poor choices, opaque and lack of support. Very cliquey", said a solicitor at HFW (48%). Career development was "Bordering on non existent to ... Well, non existent, especially for women", said a woman at the firm. "Better to sit tight and jump when possible", said a colleague. There was a "small group of people" who were supported, she conceded, "but everyone else is shafted". 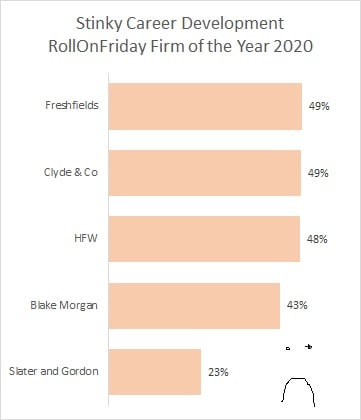 "We have new HR guidelines which are all about being promoted when you're ready, not when you hit a certain level of PQE", said a junior solicitor at Blake Morgan (43%), but, "It hasn't changed anything in practice". There were "Too many parked people above me", complained a lawyer, hence, "Little or no chance of progression". "The partner I report to is parked and has been for years", said a colleague, "In a small department, this means we are all caught up in the traffic". "Rut, what rut?" said a senior solicitor. "I'm beginning to see how poor the work here really is", said a trainee. "Debt recovery? That's what I spent years training for?"

But all four of those firms still scored almost 50%, which was a neutral score. Only PI giant Slater and Gordon dropped lower than 25%, indicating that respondents were mainly dissatisfied or very dissatisfied with their career development. "Training used to be good", said a senior solicitor, "however it is now limited as the training team has mainly been made redundant". That will present a problem.

"Micro-managed and death by tick box management. all the decent people left in 2017", said a colleague. "No one good left here to learn from", said another solicitor. "It is nearly the end of our financial year and the process for promotion still has not been seen", complained a lawyer at the Golden Turd. "What other firms operate in this way? None, surely".

‘How Not To Run A Business’ by Slater and Gordon will be published later this year, if it doesnt get lost on the way to the printers.

“it’s a great read, taught me everything” Foreword by Andrew Grech.

This is a really exciting time for our business. The traditional law firms are just about managing. That’s the truth. You can feel the excitement across the sector. None of our competitors are thinking the way we are. We’re talking about a movement.

Happy employees means a better level of work. We do what we say we will do is incredibly important because, that goes to integrity, it goes to commitment and it demonstrates we are an organisation that you can trust. And, that’s what all our customers want.

Great to see we have the 4th Head of Risk appointed in less than 2 years SRA anybody home?

How can they even mess this one up? Surely the one thing in S&G’s favour should be career progression. With the rate at which senior staff have left, the current post room staff must have a legitimate expectation to be running multi-million pound litigation in a year’s time.

I can’t be the only one struggling to muster sympathy for the cretinous, bottom-feeding, scruple-free ambulalance chasers at Slater & Gordon?

Clydes has had it coming for a while now and is getting an absolute pasting in this survey.   Its fall from grace has been rapid, not helped by the repeated stories of SRA breaches and partner defections.  Several years ago, it was expanding rapidly, had a strong brand and had won law firm of the year.  But since then it has been hit by losing a number of key people and teams and there are clear internal divisions between the corporate / transactional teams who bring in serious money and earn more and the insurance litigation teams who, despite their high standing in the market, have to work a lot harder to bring in the same revenue and where partnership prospects are non existent and work is being shipped to the regions more and more.  Costs are being cut left right and centre and good people are leaving in their droves.  There are and have been  some very good people there - the market is full of them all over the city and in house and who can blame them wanting to leave for better prospects and rewards elsewhere???  Time to wake up Clydes.

SPB is lucky to have avoided appearing in this survey as it would’ve been scraping the bottom of the toilet. Awful career development prospects (unless you’re the good old boy, who get made up despite zero client following), moribund salary raises and cost cutting left right and centre. The upcoming open plan office move is guaranteed to result in dozens of people running for the doors before the proverbial hits the fan. Avoid and run for the hills if you can, it’s gonna blow.

I love the naivete of the junior solicitor from Clyde who so confidently states that "personally I am on a track to promotion".

Let's see if (s)he feels the same in 10 years time after being told (yet again) that it's not going to work this year, but keep working harder and partnership will be coming next year for sure!

The Clydes system is that you get promoted eventually to Senior Associate if you’re lucky after years and years of hard work and delay and high hours targets and BD demands.   Then that’s that.  Pay cap, pay freezes and killer hours follow with zero prospect of partnership unless you can do what current partners can’t do which is to bring in a million pounds worth of work from scratch.

They had enough and jumped ship too, most of them were fed up being managed by a hairdresser who has no clue about hard services facilities.

Not surprised about HFW, atrocious recruitment team. Most associates sitting there in the departure lounge waiting to jump ship