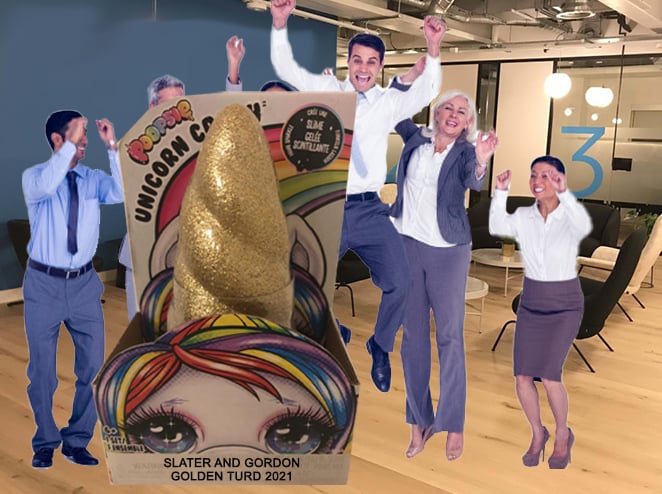 Management celebrate their second award in a row.

Slater and Gordon is this year's Golden Turd.

The troubled PI giant scored 30% in the RollOnFriday Firm of the Year 2021 survey, indicating that the average respondent was largely dissatisfied.

It is the second year in a row that Slater and Gordon has picked up the ignominious title. However, it did score two percentage points higher than last year, which so impressed the adjudicators that RollOnFriday sprung for a real, unicorn-themed Golden Turd.

It will be winging its way to S&G's echoing awards cabinet just as soon as someone can be bothered to go to the post office.

Slater and Gordon people were distraught at the turmoil which they feel continues to engulf the firm. As well as being underpaid, they now feel overworked thanks to mass culls. And kept in the dark, thanks to opaque management.

A senior solicitor said she felt "totally ignored", with "promises broken after more than achieving targets".

Trustworthiness emerged as a significant issue amongst respondents who said they had lost confidence in management to be honest with them. "Don't trust a word they say", said a senior solicitor.

Several respondents said the firm deserved credit for its response to the pandemic. "They have dealt with Covid-19 well", said one. The firm "worked hard to roll out working from home and developing the infrastructure to do so", said a junior solicitor. "The covid19 response shows the firm isn't actually managed by idiots, contrary to popular belief", she added.

But others suggested it was dumb luck. "The firm was already making preparations for working from home and closing offices regardless of the pandemic", said a junior solicitor. "So, rather than looking like a villain for closing offices, they are pretending this is some great response to a pandemic".

A partner said the firm "handled it pretty well from a logistical point of view (laptops and so on)", but "the problem is that the workload has increased unmanageably because of resignations and sackings so everyone is very unhappy".

The culls have taken their toll, with lawyers drowning in the work of the departed, and managers disappearing as soon as they'd arrived.

"We have a 6th head of department in 4 years", said a senior solicitor. "Covid has been used by HR to show a soft side to the outside world but inside it is a mess".

"I'm fairly inexperienced and I've taken over cases from some of the senior lawyers that have left", said a junior solicitor, "and I have sleepless nights".

Contrary to the PR slogans, said a solicitor, "The SG way is to pile more work on top of already unmanageable caseloads when people leave. They talk a lot about mental well-being but that's lip service".

"I don't get any supervision now and it's all gone to shit", said another Slater and Gordon solicitor. "The HR team are non existent when you ask for help".

"With Corona it is work, work, work...", said a junior solicitor. "They make me want to cry with the incompetence."

Check out the happiest firm of the year and the overall rankings.

Will S & G be around next year?

Slaters will they be around next year to complete the hat-rick?

Might be an issue storing the award do they have any office still open?

Leaving this place, despite having nothing lined up, was the best thing I did

Jamie Hamilton must have a hard on for S&G.

what happened did you get the boot whilst working there?

But not ROF. I wonder who the tragic cretin was who found it neccessary to complain and get my Linkedin account closed when all I did was offer a few home truths about my unfair treatment at the hands of the national FM. Some comments above are gold. May I point out that while they may store the GT award somewhere, possibly in an archive box in one of the old satellite offices it will vanish into a black hole the same way many case files did.

Don’t think Jamie worked at S&G. Assume he has lots of material as the business has always been a basket case. I’ve worked here since the RJW take over coming on 9 years. It has been interesting.

Among the facilities department, borderline prejudice in fact. Might seek Irwin Mitchells advice?

Programmed to think that only people from the Cardiff bubble are capable of ordering a hole punch?

Even though I hate the individual responsible and would not urinate on him if he was on fire he has done well for himself. His ruthless ambition came at the expense of many. That makes him a success I suppose. Orrible man.

Bugger, I'm applying to Wombles at the moment!  Hope they at least pay well!!

Amazing result for Slater & Gordon anyone have news on the merger with Irwin Mitchell?

will ROF ever move away from their fascination with S&G?

will ex-employees ever give up their obsession with S&G?

will all the haters ever live happy fulfilling lives?

It's not RoF's fault. It was their employees who voted!

Never experienced such terrible management in all my years of working.

They have not got a f in clue what they are doing.

Are those quotes real? how do we know it's not #fakenews for click bate? think about it people - be smart

stream29 10:17 - why don't you bloody leave !!! you're clearly unhappy. Go to some outback law firm that'll shut shop in the next few months.

13.44 think the issue might be that S&G have made thousands of redundancies over the last 3 years, and by all accounts continue to exit staff with compromise agreements!

Good luck for the future do let us know how the one in 21 strategy is going?

Why don't you just get on with your life mate.

I find it disgusting that at a time when everyone's struggling in yet another lockdown, worried about family & friends, struggling to manage work and doing our absolute best that ROF feels its right to bash a bunch of people with this baseless test pitting people against each other. These people and this firm that you've bashed are human beings. They're all trying their best in challenging times. They have feelings, pride and dignity. Shame on you for being so cruel. If you had any integrity you would stop this relentless bullying. Just stop it.

2 years in a row is some going well done team.

@15.42 I have some sympathy but the problem is S&G go to press about record profits, not wanting to be a law firm, world record breaking this and that - it kind of makes everything else fair game.

@jack you realise it's S&G's own employees that awarded it the golden turd right?

Small out back firm? That reminds me of the comment made by the S&G CEO some time ago that referred to something along the lines of “who wants to instruct a crusty old Solicitor” ?  I know I’d rather be treated like a client by a competent experienced Solicitor than a customer or consumer by a lowly paid Paralegal in a business park in Liverpool.

Good to see the chief people officer making a difference! When will S+G realise that recruiting and retaining good people is what makes a law firm thrive. I’m ex Fentons and I know only a very small handful of good people left! I see the recently departed head of PI has recently set up a London office !

Talented and popular lawyers booted out by a not so talented leadership team leaving those who remain overburdened, unsettled and working daily 16 hour shifts. That's the S+G Way.

Matt Jarvis is a pioneer of legal innovation.

They forgot to mention "stakeholders" and "onboarding." tut tut.

I'm not sure what's more f up, covid 19 or slater & gordon's management.

Both will make you feel very very ill and the after effects live long.

Would love karma to come knocking on their expensive doors.

SG management remind me of that scene in Spirited Away with the pigs at the trough.

Their most worthwhile work streams will be consumed by decent regional outfits. In short, a full circle.

“We use The Happiness Index in a variety of different ways. We use it for cultural assessment surveys and culture event feedback which is so important to us. We are able to track sentiment across the business from different audiences in different ways – as and when we need to.”
– Caroline Ward | Head of Culture & Communications

Big up the S&G management!