Firms whose staff said they were mainly satisfied with their career development formed the bulk of the results table. Which is good, although as scores slid closer to 50%, the grumbles increased in frequency and violence.

At litigation and corporate powerhouse Herbert Smith Freehills (74%), "partners take a genuine interest in ensuring you have qualification options", said a trainee.

"I've come through the ranks from trainee to partner in 9 years", said a lawyer at Shoosmiths (74%), which "has been brilliant in supporting my career development". A trainee complained that "my mates in City firms are doing IPOs, I'm doing £150k commercial agreements using Practical Law". But others vouched that the investment in their development "is excellent".

A few junior solicitors at Irwin Mitchell (72%) criticised the "huge disparity between teams and offices" which meant reaching associate level was easy for some, while "we are told you need to be at least 5PQE and have 3 years of billing over £250k". A partner compared the solicitor "who snogs a Partner at the Christmas party, gets made up to Associate", to the "solicitor who works her butt off for a decade is completely overlooked at every promotion round".

RPC (70%) "is good at identifying talent and promoting and supporting it", but "you may have to push a little for things to move a little more swiftly". There were early complaints that it was very difficult to break into the partnership, chiefly because it was all-equity. But half-way through the survey, the firm announced it was bringing in a tiered partnership structure. Scores jumped after that. It "appears to be a genuine attempt to bring more senior lawyers through", said one lawyer.

"It is depressing that 'being a good solicitor' is not a route to promotion, but 'being a good salesman' is", complained one lawyer at Capsticks (69%). "In my area of work, there has been 1 appointment to partner in 15 years", said a colleague. "1. I didn't leave another digit off. Basically some chap got straight to the top 15 years ago and has devoted his career to suppressing the careers of everyone beneath him". 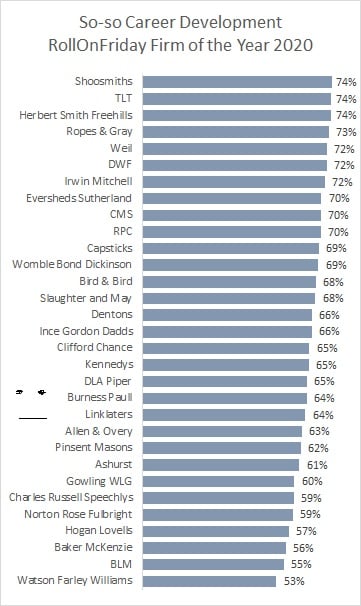 It was no surprise to see praise for the training at Slaughter and May (68%). "As an NQ, Slaughters is a fantastic place to be", said a lawyer there. "I have exposure to some of the best work in the City, and often work opposite lawyers who are much more experienced than I am". "Partnership seems a remote prospect", said a colleague, "but most people in their hearts are OK with that as they intend to move on before that anyway!"

"The quantity and quality of the work" at Clifford Chance (65%), "as well as the training and support, can't fail to develop anyone who stays for a reasonable length of time into an excellent lawyer", said a solicitor at the Magic Circle beast. Some complaints, though. Asked about their career development, a colleague said simply, "Cannon fodder".

When you discover it was all in a precedent.

"Supervisors are generally too busy to supervise or are doing it to progress their own careers", claimed a solicitor feeling ignored at Kennedys (65%). Senior associates "cherry pick the most interesting files and leave juniors with the junk", agreed a junior solicitor, " - unless you're a favourite".

Over at Linklaters (64%), "training is brilliant, completing a TC in the MC opens up all kind of doors (although admittedly my poetry is a bit shitty)", said a trainee. "Your development is constantly monitored", said a junior solicitor, "even on a week-to-week basis to ensure you're getting the right spread of work” and working with the right people.”I genuinely think they couldn't to more in this area, and having formerly been at a US firm, the two are worlds apart".

Catfights inhibited progress in one Charles Russell Speechlys team (59%), said a lawyer. There "are a couple of female partners in our team who hate each other and between them they do not incentivise me to progress my career at this firm. One plays alpha feline games, the other hates the fact she plays alpha feline games (understandably) and the whole thing depresses me".

There was evidence of internal disagreement at Watson, Farley & Williams (53%), too. "For the third year running I've been sidelined on matters because of preference by partners to use lateral associates", claimed a lawyer. Counters a lateral, "I've realised most of the home grown associates are absolutely hopeless, which in this instance is probably a positive providing it isn't contagious". Me-ow.

No one cares. Get on with your work.

I was told last night by an Irwin Mitchell HR bod that there was a sub team in her HR dept tasked with filling out rof surveys to improve scores. LOL.

Lol HSF trainee... you are so naive. Any partner showing interest in your qualification options is understaffed at NQ level

Maybe the solicitor who snogged the partner (if she actually did) was better at her job.