Skip to main content
Slater and Gordon is the Golden Turd

Slater and Gordon is 2020's Golden Turd. By some margin.

A large proportion of respondents from the firm said they were dissatisfied, resulting in a mark of just 28%. There was a significant gulf between Slater and Gordon and the next lowest-scoring firm, Blake Morgan, which scored 40%.

It was a turbulent 12 months for Slater and Gordon's staff, who were buffeted by redundancies, questionable PR and uncertainty around the firm's disastrous acquisition of Quindell's professional services decision. Slaters sued, then settled in October hours before trial.

Some staff complained that the firm was still "run out of Liverpool by the Quindell mafia". Plenty more were vicious about management, and not only because it threw over £600 million down the toilet. One solicitor said the top bods "just compete with each other to improve their PR profile for the next gig they get after this mess finally ends".

"Having worked in London for 20 years this is by far the worst managed company I've been employed by", said a business services employee with one foot out the door. "Come out with so much bullshit, raving about the new London office on the intranet. We arrived, IT system crashed, photocopiers didn't work, was extremely noisy with wooden floors, yet they claimed to everyone it was fab". 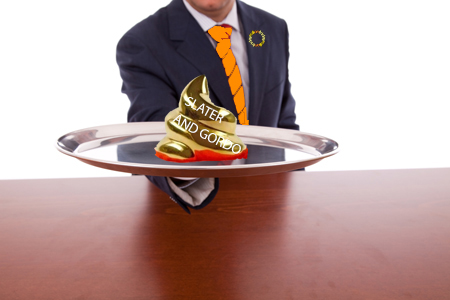 A distinguished addition to any firm's trophy cabinet, but only available to the very worst.

While offices were being smartened up to mixed reviews, many were more preoccupied with their job security. "As I'm over 5PQE I expect I will be made redundant soon as the firm makes more cuts", said one lawyer.

It wasn't all pans. The work life balance "is fairly adequate", conceded a trainee, and it was a view echoed by several staff. "S & G are very supportive of having a work life balance and expect nobody to be in the office longer than 7 hours a day", said a junior solicitor. But for many, that wasn't sufficient to offset other issues, such as training which was "fucking shit" according to one junior solicitor. Training "is almost zero", agreed a partner. As for the culture, "It is a car crash to be honest", he said.

It's not much of a consolation, but Slaters did at least perform better than 2018's Golden Turd, Irwin Mitchell, which only received 23%. Although it has to be said that S&G also did a lot worse than 2019's glinty plop, Ince Gordon Dadds, which managed 38%.

Check out this year's champs to see how it should be done.

Nothing to lose I want them to know my name. I was only a humble facilities admin but never have I been made to feel more unwelcome and unwanted by a firm after 7 plus years service. The move to the new office was needed as the old one was dated and costing a large amount in repairs. However I wanted to learn more about hard service facilities and hd spent the last two years going far above and beyond my pay grade helping out with air con and all other maintenance issues rather than call out engineers. My salary was a paltry 23k for a 33 year old man!!! None of this was ever appreciated or recognised especially around the time of the move. They took responsibility away and mad it impossible to negotiate a rise or any development concerning my role. Instead we had new methods aggressively forced on us by ops managers and nasty arrogant consultants.  Me and my colleagues were confused at our actual purpose as all things that had fallen under the facilities remit were removed.

After years trying it is great to see the management team at Slater and Gordon getting the recognition it deserves.

It is a shit show of a firm, hopefully with the upcoming reforms the show will stop.....

Well done to all at S&G on another great achievement. Just a shame that Grech and Fowlie are no longer with the firm and won't be able to attend the ceremonial placing of the award on the London office reception desk.

As ever the great unwashed of legal world put their hate filled comments on. Well done for all those who participated and pretended they were s and g employees - your hate is a sign we’re back and here to stay. Have a great Friday! Xx

Whatevs you obviously have a nice job with low stress probably sitting in the S&G office in London or Manchester and not a fee earner.

The company tries to sell you the world especially with the One in Twenty One. But they are ruthless and are happy to string employees along to maximise their productivity and then close the office as soon as they’ve got what they wanted. This year Watford was closed and Leeds after assurance that we would be safe from David Whitmore and Martyn Beauchamp.

Just be upfront, dodging the questions and being evasive about the future of an office just creates doubt and worry.

I hate the firm it is shocking the PDR process is a joke and I've not had a pay increase for years. The targets are high to the point my personal target is around 100K more than I've ever billed. If by some miracle I hit my target my bonus is now based on team and business performance also to ensure it is never paid.

Morale was so bad, they appointed a 'Chief People Officer', good to see that's going well then...

Another example of a pointless title being given and the people at the top cashing in.

The top bods live in Ivory Towers - a metaphorical place - or an atmosphere - where people are happily cut off from the rest of the world in favor of their own pursuits, usually mental and esoteric ones.

I think the managers get in a room and pat each other on the back for making your job harder and harder to do.  They have no concept of what works and what doesn't - "let's make it up as we go along and hope no one notices."

And if you seek low pay, go the #sgway

At least they don't work exhaustive hours. I was at a silver circle firm paying 60k at 8pqe for dual qualified senior associates!

The biggest disgrace of a place I’ve ever come across. Management couldn’t give a single shit about any of their employees. They don’t have the decency to sit face to face with you when issues arise and will walk straight past you in the corridor without even looking you in the eye.

as for the ‘chief people officer’ piss off, your just justifying your ridiculously high pay check.

Is that surprising as the form is a PLC rather than a traditional law firm. Remember those?

As the private practice culture is focused on billing and billing targets, the competition for La Crotte d' Orée must have been intense.

RoF says it as it is. Lex 100 uses rose-tinted specs, perhaps.

Let’s face it - all of us are a bunch of losers. Anyone who comes on this site and takes time to comment is in a pretty poor place in life generally. My fellow down and outs let’s accept we’ll never be successful and die alone with hoards of cats eating our faces

The only surprise here is that IM stayed off the bottom after the aggressive round of negotiaing people out and private deals to cut partners' remuneration in mid-2019. It created a lingering feeling of precariousness among those of us who dodged that bullet - I'm doing OK now, but will that trap door open when my billling takes a dip?

I ❤️ Slater and Gordon. Alex Leverett is such a decent man. Thanks for sending us Jolene and wonderboy Cardiff Aaron to check up on us during and after the move to order supplies and furniture for 90HH as I was not capable of making judgement on those things myself. As for Lisa I can totally forgive her for deciding Aaron from the Crown helpdesk is better equipped to plan our workspace and be the focal point for other facilities issues rather than listen to employees with over 5 or 6 years service who want to be noticed. Gave me the confidence I need to take with me in future roles. What a lovely inclusive department I worked for.

Known internally as Shit and Glitter so the award could not be more appropriate.

Fucking hilarious working in the Sheffield office for years bringing in great fees we all got fucked over by Anchorage. That is why everyone hates Slaters they are a really poor firm!

That is what happens in any functioning business. Many firms will have highly-paid staff who do not hit targets and so prevent that cash from being better invested elsewhere. They may have been nice people, but if they aren't bringing in work and their remuneration is disproportionate then the outcome is simple (if uncomfortable on a personal level).

Just to be clear the comment above is about Irwin Mitchell not the never ending story that is Slater and Gordon....,

Was there for a for years with them after the Quindell Debacle based in the Liverpool office - time served over 15 years experience.

All of the above is pretty accurate - top cheeses giving it the big one, corporate joke road shows with "one in 21" being banded about, none of the staffed have ever been convinced by the corporate guff from Whitmore/Jarvis - shutting offices one after another, centralising it all then employing chimps with zero experience.

Staff are jumping ship quicker than they could disembark the Titanic.

The comment above is obviously from an senior Shit & Glitter pissed manager responding last night at 23.06 and the other from Losers United at 23.20 on a Friday night!