This year's winner of the Golden Turd is Ince Gordon Dadds.

It is a tale of two turds. When the survey opened, Gordon Dadds and Ince & Co were two separate firms. By the time it closed, Gordon Dadds had bought Ince. The final scores revealed that the vulture had earned lower marks than the cadaver, with Gordon Dadds coming comfortably bottom. But even when RollOnFriday merged the two firms' votes together, it was still a two-headed poo.

Ince Gordon Dadds was by no means the turdiest Golden Turd to have ever been squeezed out, however. 38% is definitely a dreadful score, but it's well above the putrid 23% Irwin Mitchell chalked up last year.

It is an ignominious end for Ince, though, whose staff were once so happy they made it RollOnFriday's Firm of the Year. A lovely shipping and insurance firm, staff spoke of unicorns and rainbows at Old Ince. Now, after a couple of years so rocky there's a statue of them outside the Philadelphia Museum of Art, the unicorn is nowhere to be seen, possibly having been turned into dog food and floated on the stock market. 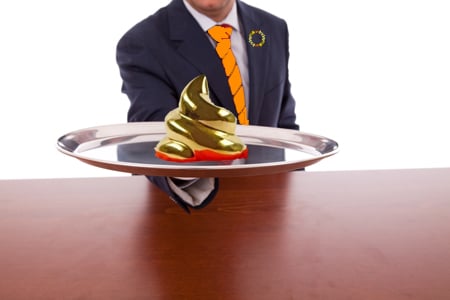 The turd is served.

Profits at Ince fell as the insurance market hardened, then senior figures started vanishing, and the rumour mill went into overdrive. Then the firm was placed into administration and bought as a pre-pack by listed Gordon Dadds, which snaps up troubled law firms as its business model. According to Gordon Dadds, the pre-pack was just a neat and necessary way to cut the deal because Ince's accounts were such a mess, and not a plot to bilk the creditors. Others suspect Gordon Dadds intends to escape Ince's debts. Certainly, stingy redundancies have already started. It's that uncertainty and in some cases a sense of betrayal that fuelled Ince's low scores.

"An uncertain future" was behind one Incer's scores, said a non-fee-earner, "and the redundancy threat". "We haven't been explicitly told", said a colleague, "but everyone knows they're getting the chop after Christmas. Even if we don't, it won't be the same firm as GD seems a bit more old school". An Ince partner had something to say, too: "Still trying to find the remains of the fucking unicorn!"

Nonetheless, legacy Ince staff had a few positive things to say about their firm. "After a really negative experience in my previous law firm", said a staffer, "Ince gave me my confidence back and helped me see a long term future in the sector".

As for Gordon Dadds, one employee said "Can't fault them on the basis they have put together a lot of failed firms and made it work and profitable". Others were more capable of detecting issues. Asked what single thing would most make them consider leaving, one non-fee-earner said, "The question is what would make me stay - an exodus of management, maybe, or retirement of the Bile twins".

A spokesperson for Ince Gordon Dadds said, "The Gordon Dadds Group has completed 12 acquisitions in the last 5 years. During this period of rapid growth and expansion we have maintained a strong employee retention and growth rate - something that we are proud of."

"Nevertheless we take all feedback from employees extremely seriously and we will continue to regularly consult staff on their workplace satisfaction to ensure we are doing all we can to support them."

Reckon everyone who said nice stuff wrote it pre Christmas... before the shit hit the fan

Brand. It's all about the BRAND.