Skip to main content
The seven worst managed firms, as voted by their lawyers

Staff at seven firms scored their management lower than 50% in the RollOnFriday Firm of the Year 2020 survey.

At Clyde & Co (49%), there were complaints that “HR and the accountants - who are not lawyers - seem to have final say over everything, which is perplexing as they don't do the job which brings in the money”. But, they said, “New management appears to be very promising”.

Management at Freshfields (49%) “or, rather, mismanagement”, said a solicitor, “has turned a place where everyone was happy and friendly and nice to each other into a viper's den of the snakiest of snakes”.

Internal comms during the Beckwith Affair which suggested the firm “is so different now and isn't that lovely and great’" were "particularly galling to those who have been very much at the pointy end of some truly awful behaviour”, said a solicitor. Another said, “While I'm pretty optimistic about the likelihood of progress as the firm realises it had the ability to promote female leaders, we've a long way to go…” 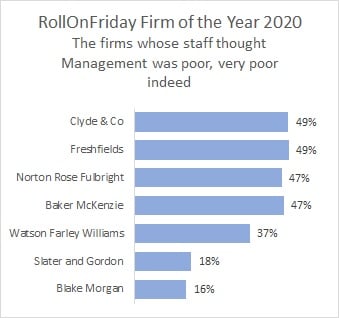 MeToo did for Baker McKenzie (47%), too, where “Their handling of the Gary Senior cover up was an absolute shocker with no accountability taken”. The “hushing up of previous issues within the firm has impressed no one”, said another lawyer. “Couldn’t tip out a boot full of piss if the instructions were on the heel”, was one eye-popping verdict. “It's not exactly been an easy year”, said a kinder employee, “and they've kept the show on the road”.

They know what they're doing...

The Norton Rose Fulbright (47%) senior management team “are genuinely very nice people, but there's a tendency for them to chicken out of making big and difficult decisions”, said one lawyer. “Their standard response to any kind of 'issue' or 'market trend' is to spend millions of pounds on a consultancy firm / hiring new 'business executives' to brainstorm 'commercial solutions'.... there are now more business services staff floating around the 8th floor than lawyers, and that's despite moving half of the support teams to Newcastle”.

A colleague said the consultants’ cost cutting measures "seem to focus on getting rid of the small, but welcome, perks while not dealing at all with the real money drains (particularly the useless IT systems and the absurd number of non fee earners)”.

Watson Farley Williams’ (37%) management was described as “opaque”. Giving an example, a solicitor said a junior associate “was sacked just before the end of his probation period - he popped out for what was supposed to be a probation review and never came back, his stuff was packed and delivered to him”. Another said “We hardly see them, and when we do it often feels like they just want to tell us off”.

“They think everyone loves them, it’s so the opposite”, said others. While ”many partners are inspirational”, said a colleague, “I would suggest that a partner publicly labeling dissatisfied staff on RoF 'malcontents' is not good leadership”.

...and they're hitting all their targets.

Golden Turd Slater and Gordon scored a derisory 18%, meaning its respondents were mainly dissatisfied or very dissatisfied with their management. Members of which, they said, “just compete with each other to improve their PR profile for the next gig they get after this mess finally ends”. A member of business services branded the leadership “Useless and toxic”, while another said, "Having worked in London for 20 years this is by far the worst managed company I've been employed by”.

They “Come out with so much bullshit, raving about the new London office on the intranet, we arrived, IT system crashed, photocopiers didn't work, was extremely noisy with wooden floors, yet they claimed to everyone it was fab. Bollocks.” Other verdicts included, “A complete shambles”, “farce”, “total bell ends” and, appropriately, a “car crash” and an “Accident waiting to happen”.

Blake Morgan was rated worst for management, scoring an abysmal 16%. “The board is made up of the same idiots who steered the ship onto the rocks in the first place", said one underling. "The logic would seem to be that, having got the firm into this mess in the first place, they’d know how to get it out. Unsurprisingly, that isn’t working”.

“A number of local villages must be missing an idiot”, said a Blake Morgan solicitor. “Completely clueless”, said another. “Last year revenue dropped nearly £4m, profit by nearly £2m. And still we carry on pressing the same button in the hope that a food pellet will come down the tube”.

“Armed with a compass, torch, diagram and a training course on the subject, I think management would still struggle to find its own arse”, said another employee. “Not a clue what's going on at the coal face”, said a senior solicitor. “One of my colleagues talks about the monkey puzzle tree model of management. At the top of the tree, the monkeys look down and see smiling faces. At the bottom, the monkeys looking up see arseholes”.

Any clues on where SPB ranked, RoF overlords?

S&G is a shit show of a business!

What happened to the mantra that the firm deserved more management?

As an ex NRF, IT Person I cannot agree more with the comments.

They seem to change CIO every few months, and I gather they are putting more people through the redundancy “consultation” process which will probably result in more jobs moving to Newcastle.

They spend a fortune on contractors, who turn up for a few months, earn a nice little wedge and then move on. But successfully managing to make no impact whatsoever.

And yes, the IT systems are useless……….(on good days).

Hang on, credit where it’s due RoF.  The management at s&m sorry s&g were quick to clamp down on staff shagging on the premises.  Both have moved on now, but by god it was dealt with pronto, ok maybe weeks after everyone in the office had heard what happened, but it was sorted.

Clyde & Co still maintaining its position on the bottom tier on all criteria reported so far then.

“They think everyone loves them, it’s so the opposite”

I don’t know how the partners feel about wfw management but this comment sums up how the rank and file feel. I hope that the partners collectively grow a pair and turf the management out and start afresh. The firm will be a better place for it.

I don’t know what standards of management the person who suggested that WFW management was “opaque” has experienced in the past but “opaque” isn’t even a starter for 10 at WFW. Opaque would be an improvement.

At WFW it’s accepted by partners, business support and associates that certain members of staff are horrendous people, but that they should nevertheless be tolerated. There’s no effort to even try to improve the behaviour of certain vile partners.

I would advise any prospective trainee to be very careful before stepping into the toxic environment that WFW has fostered for many years.

Staff are like ‘shrooms - kept in the dark and fed shit

How do WFW management actually survive?

I work at WFW (non-management and non-partner).  I really struggle to understand how its ROF results are quite so bad.  My personal experience is that it's a nice firm, that does extremely well within its niches and has great people who are hardworking and almost without fail, polite and considerate to one another.  All firms have challenges, however, in my experience (I have worked elsewhere), WFW generally does better than a lot of others in tackling its own.  The management have also sought to identify and address issues that may be giving cause for complaint, without the process either becoming a whitewash or an attempt to simply root out those who have cause for complaint.  It would be great if some of the positive experiences of WFW were submitted also (which are plentiful, if not as readily reported as the negative comments, by the looks of it).

It will be those pesky malcontents again skewing the results.