Supervisors may not provide the preferred form of assistance.

Womble Bond Dickinson came bottom of the RollOnFriday Firm of the Year 2021 Survey for career development, with a score of 16%.

At trainee level there was Covid-specific frustration that WBD offered second year trainees a six month training contract extension, instead of NQ positions. "The firm has claimed that this is only a delay to the ordinary recruitment process, and that the NQ process will instead take place in March", said a trainee, but "a sceptic might doubt how many roles will be available given the fee earner redundancies".

Wombles will no doubt set that fear to rest in the coming weeks, but other complaints look more difficult to pin on the pandemic.

A WBD trainee said seat choices were "limited and what is best for career progression or chosen qualification area (if known) is ignored".

"There is very little career development", said a junior solicitor, "and no transparency about how to reach the next tier". That might be because WBD "is great at keeping a glut of insecure juniors as juniors", said a trainee. "Good on the firm on that one, most of them are complete asshats and deserve it".

Solidarity was more in evidence in the partnership, according to a senior solicitor. "The term 'chumocracy' was invented at WBD", he claimed. "The partnership is littered with lazy bullshit artists who in turn promote individuals in their own image (predominantly stale, pale and male) with the added crucial ingredients of loyal subservience". 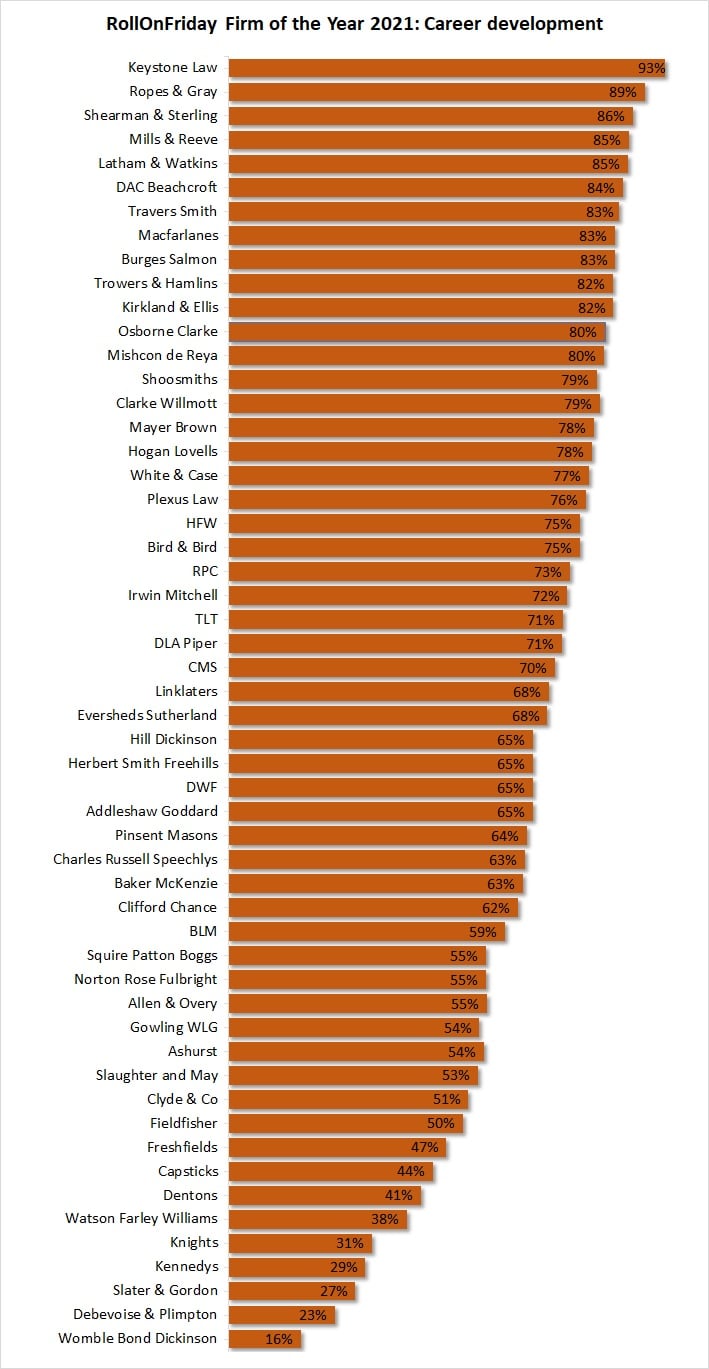 The Golden Turd 2021, Slater and Gordon, also featured among the nine firms which scored under 50% for career development.

A senior solicitor said she was "Totally ignored", and that "Promises [were] broken after more than achieving targets".

Others referenced the effect of departures. "I'm fairly inexperienced and I've taken over cases from some of the senior lawyers that have left", said a junior solicitor. "I have sleepless nights. You can progress quickly at S&G but only because they pile big work on junior staff because they can't be bothered to recruit decent lawyers (or decent lawyers won't join). Sink or swim".

At least it's the same at the top. “Partners (or as we call them, 'Principals') have no decision making role at all", said one. "We are required only to communicate the details of the latest unpopular clusterfuck dictated from on high. Usually without the benefit of having received any details for us to communicate".

"What career development?" said a Kennedys lawyer. "Defendant insurance litigation is being de-skilled year on year. The clients don't want professionals and won't pay for them".

Partners "treat you like their personal secretaries", said another lawyer, while a third complained that "I haven't had a single discussion about my career plans in 4 years".

Freshfields came bottom of the Magic Circle for career development with 47%. "Billables trump development", said a junior solicitor, while another said that partners "devote their time to their favourites and ignore everyone else".

But "the stuff in the careers marketing material about the wide range of work is actually true, in my experience", said a Freshfields trainee. "The associates are also so continually shafted that they are desperate to give as much responsibility out as soon as they find a half-competent trainee, so you can end up with a fair amount of varied work". It was "Hard to complain about career development when the level of responsibility is increased so dramatically by the amount of work around", agreed a junior solicitor.

If they quickly jettisoned the Newcastle and London offices could they have an almost average law firm?

How badly do Womble Bond Dickinson have to do before they get to own the 💩 emoji?

If they are already there 💩 🏆

If they need to be just a little bit worse

im currently going through the application process at wombles and I noticed it seems to have a really poor reputation here and always ranks bottom of the surveys. Can someone explain why please because I’m genuinely curious/ worried lol

Good to see Debevoise getting the ranking it deserves. It’s career development is excellent. One need only look at departures in recent weeks to see how it excels at both spotting and polishing turds, before flushing them down Holborn Viaduct.

Watching the Slater and Gordon shit show is like watching a slow motion car crash.

Sounds similar to my city firm, except the promoted self-image would be gangsta-style.

S+G have lost many of the best lawyers they had. Haven’t replaced any of them. Piled the rest of us with the leavers cases. What a business model.

When will this survey finish? Asking for a friend. Who is in PR. For a law firm. Fairly near the bottom. Most weeks.

@Anonymous 10.29 - please can you tell us the Womble marketing team’s response to the question about the Newcastle and London offices?

I remember how badly Dickie Dees treated junior staff in the 2008 recession.

The firm may have a new name, but it appears they’ve gone straight back to their old ways when times are hard.

Credit should be given to all the Womble Bond Dickinson staff who had the courage to fill in this survey honestly. An overhaul is obviously needed and you’ve helped make this happen.

We are quite busy right now. Can we get back to you? Just pop your email address on the thread x

"Asshats". That's being charitable. Latest round of promotions is a disgrace given redundancies, trainee furlough, pay freeze. And the ineptitude in the junior to mid levels that have been promoted mostly to stop them leaving. Pay peanuts...

Given the similarities, the inevitable inquest at WBD should take account of partners who were in post in the last recession and this one.

It will be pretty easy to identify the teams which threw their juniors under the bus last time and this time.

As an ex-Womble junior, I'm glad to read that it wasn't just me that felt this way about the lack of visibility re progression. No one really cared for your career or your future and couldn't tell you what to expect regarding promotion or pay rises. The partners just expected you to crack on with increasing billing targets each year and an annual appraisal with a nod and a 'very good'.

It's a shame to see such negative comments as I enjoyed a lot of my time there but I think the firm will learn from this.

The comments about Wombles' Newcastle office (here and elsewhere in the survey) are a fascinating read.  When I was at law school in Newcastle (pre-mergers), Dickie Dees seemed to be just about everybody's first choice - with those having a DD TC being more than a little smug about it.  I never quite understood why.  Sort of a big fish, small puddle, don't fly the nest mentality?

As funny as these comments have been it is remarkable to have seen WBD’s fall from grace - Slater and Gordon you would expect to be scraping the barrel but to see WBD’s implosion shows that all the partner in fighting and office conflicts are being noticed by juniors as well....

Nobody ever seems to go back to Wombles Newcastle office after they’ve left.

That tells you something about where it sits in comparison to other nearby firms, but also about the people who remain.

Dickie Dees was run like a gentleman’s club. That’s why it never became a DLA Piper or an Eversheds. You never felt like the partners were on your side.

If it is anywhere near the same now then they deserve 16%.

Dickie Dees was never a gentlemen's club - it was more like the Shilbottle working men's club TBH, including the decor...

Dickie Dees had oak panelled meeting rooms, but a grubby 1970s carpet material on the walls of the rooms where the staff worked.

What is your sample size for this analysis?

It's such a shame because WBD could be such a great place to work.  It really does have a lot going for it - a good client list, strong finance and IT depts, decent benefits, good offices, but it's management is stuck in the past and it's not just DD.  Wake up before it's too late!

As an ex-womble junior, I am not at all surprised by the comments made in this article.

I heard that since the article was published the partners have been doing the rounds asking if anyone agrees with the comments so well done for calling them out!

Ought to have named themselves “Womble Bond” back in 2017.

Can't wait for the Womble-bashing next Friday. It's becoming quite the ritual. Excellent.

Astonishing that Irwin Mitchell are not scraping bottom...

Q. Following their 16% score in the Roll on Friday survey should Wombles partners:

Sad to see all this Womble bashing but not surprised as was very bemused and amused when the outgoing uk chair never believed in the Blair project he fought hard to undo so these scores are sad but not a surprise. Dissent is contagious

How did S&G not come bottom in this part of the survey?

Anyone else care to elaborate on why Freshfields is being trounced continually?

I didn’t get the email from the Marketing Team.

Are we supposed to say we didn’t deserve 16%? Or are we saying it’s unfair to criticise us after we got 16%?

a new low for WFW? Not  a single comment on this result

Amusing that people think Freshfields care about anything written about them here or any other forum (including their own internal surveys) - they thank you for your contribution and feedback and place it in a very large filing cabinet labelled ‘Nobody Cares’ and store it in their Manchester office.