This week's Pandemic Lawyer of the Week is the founding partner of Gunner Cooke, who has been keeping himself busy dispensing dispensable invaluable advice.

These are strange times, but one of the oddest sights has been lawyers appointing themselves as pandemic life coaches for their staff after years mainly drafting shopping mall contracts. Cooke is no beginner however. He has a book out (‘To innovate or not to innovate’) and produces a blog on leadership.

Freed from the restraining influences of the office environment, Cooke's latest missive begins with an invocation in large, bold, red, underlined letters to "Do more than last the course - be awesome". It was not clear what course Cooke was talking about, but our guess is equine sedatives.

"The third week is the test, the test of discipline", reveals Cooke in the email, "so allow me an indulgence to pass on my thoughts to get through this and come out better". If readers had not already grabbed a strong drink, they would have when they saw that Cooke's first section was headed "Large Thoughts". 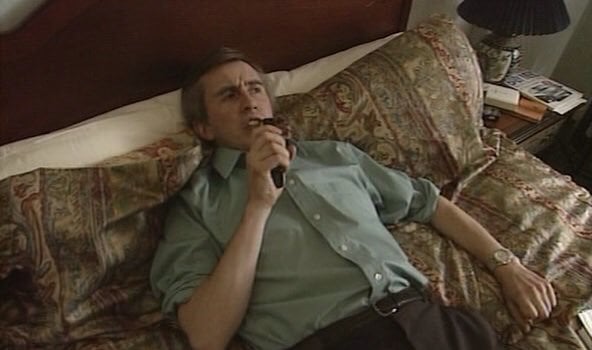 "Lockdown idea: use a catapult on your local parakeets. They look exotic, but they're a pest."

Cooke follows up with a list of "Smaller thoughts", about 3,000 of them.

"I can’t beat the SEALS video in my last blog", writes Cooke, who appears to smash the space bar at random intervals, but, "Make your bed , put on your make – up , make yourself feel good at the beginning of the day and it will continue in to the day." 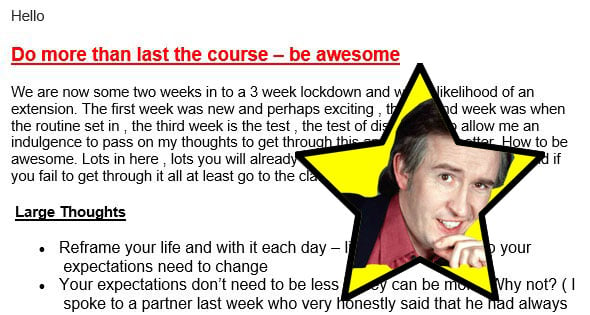 Cooke also advises his subscribers not to "obsess with the news", and recommends that "5 minutes at the beginning of the day and 5 minutes at the end is sufficient". It means anyone who obeys will spend more time absorbing Cooke's variously-sized thoughts than what's going on in the outside world. A sobering prospect.

But not as sobering as Cooke's Deep Bath. "Make the evenings special", purrs the former head of EMEA private equity at DLA Piper, "– make the house look nice , candles, a bath , make bread , relaxing music”. "Show them how to do it guys", he winks, as you fumble to turn off your ventilator.

RollOnFriday raises a glass, in fact the whole bottle, to Cooke, whose wise words will fill a gap for people who don't already have a well-off baby boomer on their neighbourhood WhatsApp group telling everyone how to live their life while passing on fatal cures for Covid.

If you've spotted a lawyer blossoming in the pandemic, write in.

Tags
Pandemic Lawyer of the Week
Coronavirus
Tip Off ROF

Don't you always get what you reap?  Isn't that the whole purpose of reaping?

Which does make sense. Unlike almost everything that follows it.

A lesson in how to say absolutely nothing of value in as many convoluted ways as possible. Also the title of the next book...

The platitudes do seem to be BS in an Alan Partridge way... The same applies to all books written by so-called self-help gurus. They tend to be directed at sales reps and Amway distributors in the main.

When is my papier maché model leader turning up?  The post is so slow.

GunnerCooke is not a law firm. It is a legal services hub which makes commission from "eat what you kill' consultants with the moniker "partner" who work from home (look it up on Companies House - it has *3* real partners).

It has had some "partners" who were spectacularly good at social media, like Simon Robinson...oh, wait