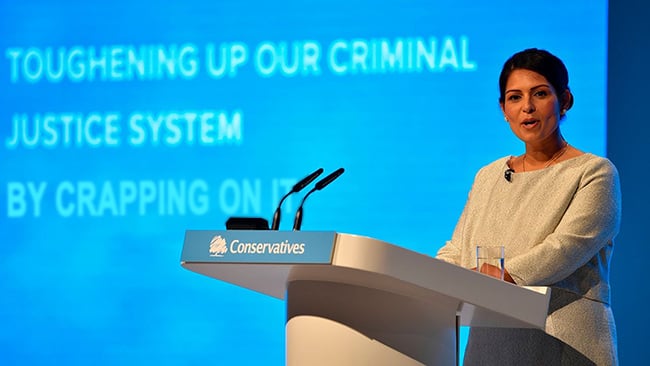 Patel vs "lefty lawyers" and "do-gooders"

A letter signed by prominent figures in the legal community has accused Priti Patel and Boris Johnson of endangering the safety of lawyers acting for asylum seekers.

"We are all deeply concerned at recent attacks, made by the home secretary and echoed by the prime minister, on lawyers seeking to hold the government to the law," said the letter. More than 800 people in the legal community signed the letter including former justices of the supreme court - Lords Collins, Dyson and Walker - as well as other former appeal court and high court judges, numerous QCs, partners and law professors.

The letter blasted Patel and Johnson for undermining "the rule of law", and called on them to "behave honourably by apologising for their display of hostility, and to refrain from such attacks in the future".

This month, Patel criticised immigration and human rights lawyers, denigrating them as "do-gooders", bracketing them with people traffickers, and accusing those who acted for asylum seekers as "defending the indefensible".

Boris Johnson took the baton for his keynote speech at the Conservative party conference and thumped the legal profession even more with it, claiming that the criminal justice system was “being hamstrung by lefty human rights lawyers”.

The letter, which was published in The Guardian, also accused the ministers of endangering "the personal safety of lawyers and others working for the justice system, as has recently been vividly seen."

The comment about the safety of lawyers alludes to a knifeman entering the Harrow office of Duncan Lewis Solicitors (a firm that has been involved in some high-profile immigration cases) on 7th September.

The man faces various charges including threatening to kill an immigration lawyer, and threatening another member of staff with a "large knife". The prosecution allege that the man told police that he planned to "take a member staff hostage" and place Nazi Germany and US confederacy flags in the window "so that like-minded people would take action".

“We have been repeatedly clear that any form of violence against lawyers is unacceptable," a spokeswoman for No 10 Downing street told RollOnFriday. "Lawyers play an important role in upholding the law and ensuring people have access to justice – they are not however immune from criticism."

She added, “the Government’s efforts to facilitate entirely legitimate and legal returns of people who have entered the U.K. through illegal routes are too often frustrated by last minute challenges submitted hours before a scheduled flight.”

Hard to get too upset. "Harrow has one or more resident nutters" is hardly a headline, not sure why the government of the day is being held responsible for it.

Either way, it won't be an issue for long. I'm sure that 'prominent figures in the legal community' will get on the bus at the weekend and go sort Harrow's issues out themselves. Such is their munificence.

Why wouldn't I want to extricate as much money as I can from the legal system to fund my lifestyle.... I am an expert at appealing as many times as I can for my clients, especially when they are about to leave, so that is even more money in my coffers.... If the law allows me to enter spurious appeals then why wouldn't I want to take them up on that....

Endanger migrants by weaponising a pandemic through moving all migration controls upstream, so arriving via unofficial route is the only way to claim aylum. Tick (bonus tick for killing some children this week).

Endanger lawyers by characterising them as activists baddies. Tick (with bonus point for undermining the rule of law).

Garner some dog-whistle headlines in the Express, Mail and Telegraph to get the mouth-breathers frothing (tick).

Yes yes 15:17, we're all aware that the Conservative Party is actually an elaborate front for a neo-Nazi movement. Why, if you turn your ear to the window you can hear the jackboots striding up Whitehall at this very moment. Or perhaps that's just the sound of bones grinding as they feed another dozen immigrants into the sausage mangle.

Not that they're going to eat the sausages of course. They just do it for fun. The spare chipolatas are an incidental bonus that they can use to pay their butlers with.

And to think, it all started with criticising an endemic culture of abuse of process amongst immigration lawyers who considered that their cause was so noble as to justify any means. If only we'd just kept throwing cash into an inefficient and wasteful system that the public had repeatedly expressed dissatisfaction with eh? Then this dystopia would never have come about.

The government - which has been in power for the last 10 years, derives its legitimacy from law and has an 80 seat majority with which it can change the law - turns on lawyers and dubs them activists when they insist that the government obey the law.

Patel talks tough but delivers nothing time and time again.  She is worse than May.  Noisy but utterly ineffective.

@at anonymous 23:52 - no, not on "lawyers" per se; just grotty ambulance-chasing opportunists who insist on characterising every government action as an egregious human-rights abuse. But of course the motivation is high-minded and about holding the government to account - and in no way motivated by money. You must be so proud of Phil Shiner.

Judges also need to stick to the rule of law and stop over-reaching themselves.

If you give the Black Spot to a policeman you are legally entitled to urinate in his helmet.

It's in The Magna Carta.

Toby's right about this.

I wish more people knew about it and exercised their rights under The Magna Carta. 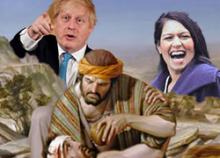