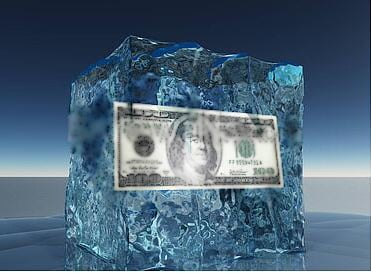 A Google image search for "frozen salary" comes up trumps

Slaughter and May will continue its salary freeze for staff, but has reinstated partner distributions.

In an internal email seen by RollOnFriday, Executive Partner Paul Stacey told staff that the partnership board had decided "not to move associates through the salary scales this year nor to award salary increases across the rest of the firm." He said the situation would be reviewed again early next year.

"Regrettably, neither the pandemic nor the fallout from it are yet over and in deciding on salaries and bonus we have had to balance the hard work you have put in and the need to continue to be cautious in these inherently uncertain markets and times," said Stacey in the email.

In May, as was the case with many other City firms, Slaughter and May reduced salaries of its NQs from £92,000 to £87,000, due to the pandemic. But while the pay freeze continues at Slaughter and May, other firms have started to thaw their salary restrictions (at least for lawyers) and upped pay. One source at a rival firm speculated that "Slaughter and May associates are now paid less than Macfarlanes as the pay cap continues." O Tempora! O Mores!

However, sponsoring a Slaughter and May lawyer this Christmas won't be necessary, as Paul Stacey's email announced that annual discretionary bonuses would be "2 per cent above the level of last year's bonus to recognise the significant contribution across the firm during the year."

Slaughter and May takes a semi-socialist approach to bonuses, awarding everyone in a band the same amount instead of tying them to hours worked by an individual or veins popped in service to the firm. One of the draws of the firm for many associates is that it doesn't enforce a minimum billable hours policy.

Slaughter and May has also reinstated the partner distributions that it suspended in April this year; although the move hasn't gone down well with all staff. One source complained the firm was freezing pay for the troops whilst seemingly letting the officers coin it, saying that the partners had "back-paid themselves dividends" over the eight month period that the distributions had been paused at the start of lockdown.

Other staff were more relaxed about the partner distributions. One insider (not a partner) noted that the firm's partners had only received minimum drawings from April to November, and commended them for building up as much cash/working capital as possible during that period.

Whether your firm is handing out unexpected bonuses like a magical elf, or acting like a miserly Ebenezer this Christmas, let us know.

Tags
Slaughter and May
Bonus
Salary
Tip Off ROF

Not a good look given the general unfreezing of salaries across top firms.

My own MC firm's corporate department is absolutely flying at the moment, so odd that SM's isn't.

The big takeaway point from this news is that, with the freeze now extending for a whole year, the net impact of this is that all of the bands have been moved one tier down, i.e. a 2PQE associate is now paid what a 1PQE associate was paid last year. So really with this email the firm confirmed that the freeze would turn into a pay cut.

Even if they unfreeze the bands next year, unless they suddenly move people through two pay bands (which Slaughters will never do, the partners are far too business savvy for that), when the dust settles there will have been a pay cut for all associates at the firm. Meanwhile clients are continuing to pay the same rate for a 2PQE, so the saving is pocketed by the partners.

What is rather comical with this situation is a pal of mine moved there as a lateral and she is receiving the correct salary for her band, meaning that she is now paid more than her peers. So much for their flaunted egalitarian approach!

Oh SM's practices are certainly thriving at the moment given the hours we've all been working. We're just not sure where the money is going.

Food banks across the Capital are bracing themselves for the arrival of pinstriped S&M hordes, I'm sure.

Give generously. No amount of furniture stacked against the door can hold them.

Slaughters's corporate department, and the firm generally, are also flying at the moment. The partners are just being stereotypically tight...

It is flying. This will cause a lot of anger for the sake of a few grand.

Well, if the corporate department is busy, it is an even worse look for the greedy partners!

Come next year, you will have people being paid two years behind (i.e. a 4PQE getting paid as a 2PQE).  Might prove a little difficult to retain good associates ...

My heart weeps for all those poor, impoverished Edwards and Henriettas, earning only £87k instead of £95k. Oh the humanity, will somebody think of the children!!!

If associates feel they are getting underpaid they should be a little more business savvy and actually leave, not just moan about it. Unfortunately SM lawyers are unlikely to realise.

To be fair, when you’ve been earning millions and millions for years, and have more money than anyone could reasonably need, it’s only right morally that you would then unilaterally reduce  the pay you offered the minions when they joined, and pocket it yourself, whilst still making them work horrendous hours to make yet more profit for you.    The idea of taking a very small hit on an already huge monthly drawing to pay the minions what they should be paid in line with the market is clearly abhorrent and couldn’t be justified and wouldn’t be the right thing to do.

“We're just not sure where the money is going.”

I’ve got a pretty shrewd idea!!

It certainly feels that the firm is hiding behind Brexit uncertainty and the pandemic to further line the pockets of the partners. Lots of cost savings made including via redundancies, no expenditure on home working equipment, but no noticeable drop in activity levels (quite the opposite!). ‘One firm’, it ain’t!

@ Anony5 maybe but there are a lot of firms other than just US firm satellite offices that now pay more than S&M - any of the other MCs, bunch of silver circles ...

@Anon 11:02 Macs actually don’t pay better, in fact less their NQs are on 80k which is also a joke

Don't think Slaughters associates are on a lower salary than Macs (though Macs bonuses are better). Macs reviewed salaries but all the bands are lower than the equivalent from last year. I also blame S&M partners for this - they're making it harder to whinge about our own salaries by comparison.

Every comment here received a minimum of two down votes. One can assume then that SnM marketing is reduced to two.

Indeed. I posted something on Saturday, which appeared in this comments section but has mysteriously disappeared. I am not sure if it gave the game away that Slaughter’s associates were wasting their (significant) time when they could be doing great work at a top US firm, working the same or less hours and getting paid around 70k more a year with a bonus of up to $100,000 depending on PQE. Maybe someone didn’t want people to know this great secret.