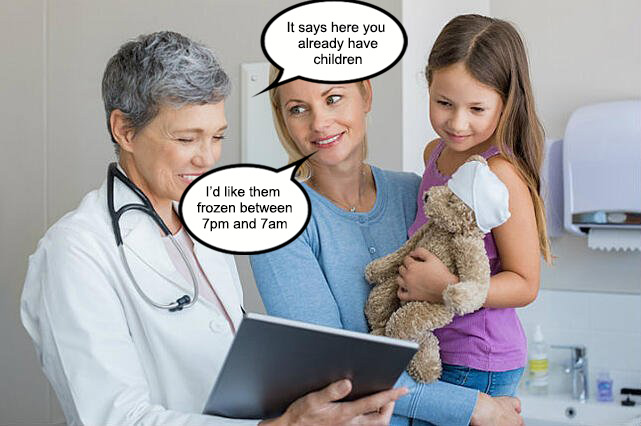 'Whatever your stage in life, Cooley has a family plan for you™'

Cooley is offering £45,000 to UK staff for fertility treatment, surrogacy, and egg-freezing.

The US firm is providing all its London office employees, including singletons and those in same-sex relationships, the option to claim £45,000 towards the cost of IVF, egg-freezing, adoption, or hiring a "gestational carrier".

Cooley senior lawyer Sascha Grimm said the firm was "delighted to offer this industry-leading fertility and family-forming package to our London office", adding that the firm "supports all paths to parenthood".

Grimm said Cooley is also offering three months of paid parental leave to mothers and to the "non-birthing parent" as part of its package of 'Cooley Eggey' (unofficial title) measures, which will bring the London branch of Cooley up to speed with the treatments on offer at its Stateside offices.

Some scepticism has greeted the perks, however, with critics questioning the ethics of surrogacy - in particular the problem of whether it exploits poorer women for the benefit of rich buyers - and whether facetime and billing expectations helped create an environment in which fertility treatments and egg-freezing were more likely to be necessary.

"An even better idea might be to change your culture so that working women don’t feel that, if they want to get on, then they have to put off having a family till they are of an age when they are likely to need fertility treatment", said one commenter in The Times.

Others viewed the policy as a positive attempt to help staff. "I’m sure there are strings attached but to anyone suffering from infertility this would be a godsend", said one.

Lawyers on RollOnFriday were similarly split in 2016, when Latham & Watkins began providing nursing mothers at the firm the chance to ship their breast milk home to their babies while they were working abroad.

Some blasted the perk as an example of female lawyers being encouraged to put their job before motherhood, but others saw it as a welcome opportunity for women to pursue their jet-set careers without having to press pause during the years they breastfed their children (albeit not in person).

Clifford Chance has rolled out a similar scheme to fund fertility treatments, to the tune of £15,000. Alternatives for readers whose firms don't offer a package are available, however: RollOnFriday can recommend Lawyr, although results may vary.

THIS "An even better idea might be to change your culture so that working women don’t feel that, if they want to get on, then they have to put off having a family till they are of an age when they are likely to need fertility treatment", said one commenter in The Times.

As a female I will not need to be reminded to avoid that place!  It is certainly not something they should be shouting about! Shame on them!

I think this is a really good thing for same-sex relationships although I can completely understand the hesitation on creating this culture for heterosexual women.  It could potentially be weaponised within the firm’s culture but I suppose having the option there for those who cannot traditionally have children is better than nothing?

"non-birthing parent". Do they mean "partner"? or they could just say "shared parental leave"? It makes women sound like nothing more than a "birthing" entity. I wonder if their policy talks about "chest feeding" as well.

On the other hand, this is great for those struggling to have kids, but agree with the comment that it could be seen as suggesting women put their biology on hold for the benefit of the company.

For those shouting shame on them, bear in mind that at least one in eight couples will experience fertility issues (irrespective of whether they decide to "wait to push ahead job wise"). Good on them for trying to help staff going through this out.

For “gestational carrier" read poor woman, probably from the developing world. Nice to see Cooleys pushing for the exploitation of poorer brown and black women by their wealthy, white counterparts. Any rich women hiring out their wombs?! No, didn’t think so. Surrogacy is grim af.

"but agree with the comment that it could be seen as suggesting women put their biology on hold for the benefit of the company."

Whereas I see it as Cooley recognizing the absolute hideousness of what is on offer in the dating pool such that it may just take a little bit more time to find someone you are sure you don't have to also mother while working and being a mother to an actual baby.

A bit sinister sounding, but probably better than the current alternative of high attrition rates among ‘birthing parents’?

Surrogacy is little more than human trafficking.  A shameful, exploitative practice that treats both mother and baby not as humans, but as vessels to satisfy the desires of the commissioning "parents".

A cynical analysis occurs to me. This is basically an admission that the firms expect people to work extremely long hours at the expense of their fertility. Perhaps Cooley and Clifford Chance are a deliberately sending a message to current and future hires, "Working here is incompatible with mating, breeding and child-rearing: join at your own risk!"

If so, it's rather Machiavellian, but clever and should increase PEP: it will deter all the associates who bill less because they want luxuries like 'time to see their friends and family', and it will vastly reduce the cost black hole that is maternity leave provision.

No one can "have it all", so why pretend otherwise? I've a lot of respect for friends who opted out of law entirely soon after completion of their training contracts, or who moved to far lower pressure in-house roles, because they actually want to see their children. There are only 168 hours in the week: you can only have one top priority, either your career or your family,  and everything else will suffer. As one ex-Clifford Chance Oxford law graduate friend said, "It is impossible to be an excellent City lawyer and an excellent parent".  That must be true: one of those must be your top priority, and the other therefore must not be.

People who work in these firms aren't stupid, they also realise that they we all have finite hours in the week (and finite life spans before we are dead). If they want children, many will quite sensibly jump ship. Indeed, that's the basis on which the associates->senior associates->partners pyramid works: it requires attrition. Of course, that does mean that we should never expect to see female lawyers equally represented at the senior levels of such firms, because they very sensibly prioritise other things than ego, self-perceived 'status', and salary. Until we accept that unpalatable self-evident truth though, PR gimmicks like this will garner headlines, as firms seek to target those who, on any objective criteria, quite sensibly will choose to pursue more rounded lives.

Ultimately, firms only need a certain number (and calibre) of junior associates, senior associates and partners. If they can weed out the less committed by signalling that they're not really welcome, it's great for the partnership!

Paying to pimp out women's (of the adult human female kind) uteruses.  Nice.

This is fantastic! As a female, if I want to have a child naturally I am forced to do so between ages of 30 - 40 (or earlier) whilst men get to do it any time they like. This is one of the great disadvantages of being a woman that I am powerless over. Cooleys offering gives me a wider time period to choose from. How can offering women more choice not be a great thing?

It’s not offering them more choice though. The stats  on egg freezing and IVF are sobering. If women at Cooleys really believe they can freeze their eggs (which are less likely to result in a successful pregnancy than frozen embryos) at age 30 and wait until 45 and easily have a baby they need to be very quickly disabused of this notion. The only option that really helps them is surrogacy, which is ethically dubious at the best of times. They would still need donor sperm in order to take that route anyway. Unfortunately biology does disadvantage women when it comes to the time available to have kids - you can’t put it off for as long as men can.

Whether or not I want to do IVF etc is a decision for me or the respective woman. Everyone else can have an opinion on whether it's a good decision but ultimately it's my decision - a decision I would now have greater freedom to make, if I worked at Cooleys. Ergo - more choice. Should also note that the allowance is also applicable to adoption fees.