Skip to main content
Upskirting barrister banned from the Tube

A barrister has been given a 24 month community order after being convicted of upskirting.

Daren Timson-Hunt has also been banned from carrying anything capable of taking a photograph and from the London Underground except in specific circumstances.

A passenger on a Northern Line train in June said they saw Timson-Hunt, who until recently was a government lawyer connected with Brexit negotiations, rest his mobile phone on his thigh, slowly adjust it and take a picture of a woman on the carriage.

The 54-year-old followed her off the train at Embankment and took a photo up her skirt after she climbed the stairs in front of him.

Fittingly, the barrister arrived at Westminster Magistrates Court court in a flasher's mac, and even more fittingly shouted at paparazzi not to take his picture. 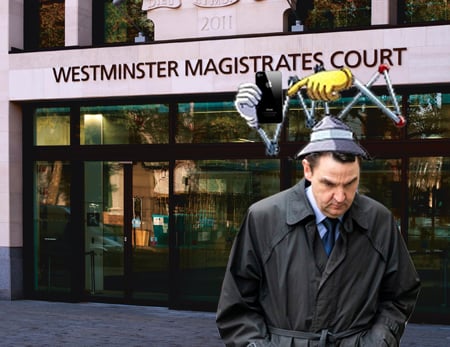 Hang on a second

Timson-Hunt admitted one charge of "operating equipment beneath the clothing of another without consent for the purpose of sexual gratification". He is one of the first people in the UK to be convicted of upskirting since it became a crime in April.

"I have never done something like this before", he told the court. "I am an idiot". The victim said she felt "violated" and hasn't worn a dress or skirt since.

As well as his 24-month order, which includes 30 days of rehab and 60 days of unpaid work, Timson-Hunt's phone will be destroyed and he must pay £80 costs and £90 to the victim. He has also been banned from the London Underground except for the purposes of visiting his solicitor, a doctor or to attend job interviews. And he is forbidden from carrying anything which can take pictures, except a laptop, which has to be switched off and kept in a bag. He is allowed to sketch on a bus.

Timson-Hunt's lawyer said his client's life "has been completely destroyed by his actions on that day" and that he was now unemployed. "The marriage is on the rocks", he said, "it is touch and go whether his wife will remain with him."

The ban on using cameras or travelling on the underground is silly. And unenforceable.

Destoying the phone seems a bit pointless. It was only following orders, as it were.

Thought, presumably, if he refused to let the police root around in it, he might have other grimness on there. In which case, only way to be sure is to nuke it from orbit.

Call me a cynic, but I suspect that the line "I have never done something like this before" may be a massive fib.

I am afraid the ban on using cameras and the underground is enforceable; albeit quite wide ranging and silly. If he has been given a SHPO (or whatever the latest name is) then police are expected to randomly check up on him. If found in possession of a smartphone, or travel card, then he is in breach and off to jail he goes. Sadly there is seldom a decent risk assessment conducted before these silly decrees are handed out like sweeties by myopic Magistrates.

At least this order makes some attempt at relevance. I have known the lower courts/CPS happily draft absurd orders, for example:

Not to use any public transportation (defendant didn't drive)

Not to be found in any retail premises

Not to go to any doctors surgery or hospital

I am so glad I left behind the kafkaesque world of the Magistrates Court. My respect to those who are still trying to make a difference, and as a nation we should be ashamed at the state of our Justice System.

At least if this chap was the PM he could simply ignore the law and carry on....

The fact that he has lost his job and likely his wife is entirely of his own making. Is that supposed to infer that he has suffered enough? If he didn’t have a wife and job would that make him more deserving of punishment? Frankly I see those as entirely foreseeable and direct consequences of his own actions. This time he simply got caught.

Anon @ 10.03 - very interesting comments on the type of orders being given out. I didn't realise people subject to these orders are subject to random checks. But in practice, surely the order is very difficult to enforce - he must know he's subject to random checks, so would take precautions and could probably argue if he had a travel card that he only used it for buses and trains and not the underground. Does the order mean he can't keep cameras at home?

Also, are there actually people in prison for breaching these types of orders in the ways described, e.g. being in possession of a travel card or having a camera, if these were the only breaches?

"He is allowed to sketch on a bus."

What if the bus goes under a tunnel though?

God how... weird people are! What a twat. And lols to letting him sketch on the bus.

At some level it probably is more deserving of sympathy that he has a wife and a job Dearie than if he didn't. For his wife too.

What's with the downvoting on every post? And yes, I know my own post will be downvoted....thank you in advance.

I'm fascinated by how many down votes there are on most comments on most articles. I don't understand. Are you down voting the comment and the commenter, supporting a negative sentiment, down voting the article or just being contrary? Some comments I read make perfect sense but they have loads of down votes which seem to infer people disagree with the suggestion (and I realise, not everyone agrees on all things but the number of thumbs down do seem ridiculous sometimes). I don't get it!

Infrequent Visitor - we had the same thought! I don't think your post had been approved when I posted mine as I didn't see it before posting but great minds, etc. From the timing of your post, I'm guessing you're in Asia, Australia or New Zealand as I am. Every week I wonder who these down voters are and what they are trying to say.

One of those bad boys will clock him and the feds will be alerted.

There seems to be no comments made on the victim, who should be at the centre of all of this. She is no doubt traumatised by this creep, no longer wears skirts, must think that everyone is trying to look at her and lose her self confidence. The victim should be protected by the law and the pervert deserves his punishment. Perhaps someone should have told him that he can use his phone for private moments of George Michael behaviour, and not for upsetting innocent victims.

The man is a predator and deserves to be treated as such.

It's possible to sympathise with the victim and also have sympathy for the other people involved, Peeping Tom - the two aren't mutually exclusive. I'd prefer to see the guy get some help rather than simply being branded a pervert or predator.

Yes TC, I'm from Australia. Maybe the downvoting is a UK thing that we're missing?  Cheers.

"touch and go" is a slightly unfortunate turn of phrase, in the circumstances.

Anon 1 October. If the perpetrator involved some young lads on a night out, who may not have known the law, then perhaps they would require some education about what they had done. In this case the perpetrator was a barrister, who was very well educated about the law, knew his activities were illegal and knew the consequences if he got caught. This was a deliberate act to break the law. He should be treated more harshly, he does not require further education, as he already knew his actions were unlawful. I think there is a difference.

If a police officer were caught speeding, and whose job it was to catch others who speed, then he or she should also be treated more severely than those they prosecute for speeding.

Anyway look at his raincoat, and the fashion police should charge him with wearing a flashing mac in any case.