A Scottish firm has unleashed a video nasty which stars its lawyers as gangsters.

In just 1 minute 24 seconds, Blackadders puts viewers through all the stages of mourning, from denial to anger to bargaining to depression to acceptance.

The video begins with a tagline which, while clumsy, demonstrates that whomever wrote the script knew it was technically inaccurate to refer to people as dogs, and felt that it was important to make that clear to viewers.

The team's US accents and attempts to appear menacing are about as successful as you would expect from a group of Scottish lawyers. But they soldier on, trekking out in public to recreate an iconic scene from the movie. It may have been parodied 7,000 times since 1992, but never with such a bleak backdrop.

Mr White: What happens if we don't listen to this podcast?
Mr Trainee: Cut off one of his ears. The left one.

To its credit, the homage matches the original for shock value. In a harrowing scene, Boyle as Mr Blonde prepares to cut off Weir's ear by performing a jig more transgressive than anything in Tarantino's violent opus.

Everyone gets to play guns.

And of course Allison, a lucky acting coach's pension fund, doesn't miss the chance to pop off some shots on the silver screen.

The firm may know what it's up to with this travesty. Asked if there were any other movies in the pipeline, a spokesman for Blackadders said, "Trainspotting in Dundee. Opening sequence, Choose Life, Choose Blackadders, Choose expensive suits then make them look cheap". Turn the sound up, turn your expectations down and endure Reservoir Pods here. 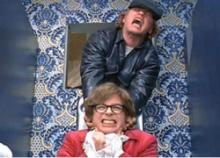 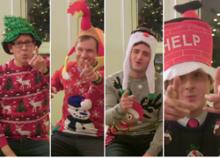 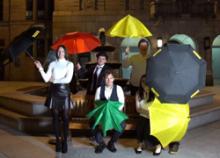