The Attoney General of Arizona has celebrated legalising nunchuks by waving them around in an office building, arguably several months before it became lawful to do so.

Mark Brnovich released a short video of himself whipping the nunchuks about in a corridor, in a decent imitation of a chubby-yet-competent ninja.

"Clearly, my years of martial arts training paid off", he wrote under the clip. "Pulled my old nunchuks out of storage...like riding a bike. #WayOfTheDragon".

The lawyer was celebrating nunchuks being removed on Friday 13 May from Arizona's list of banned weapons, which includes bombs and silencers. Nunchuks were allowed to be used during martial arts training, but not in other circumstances. 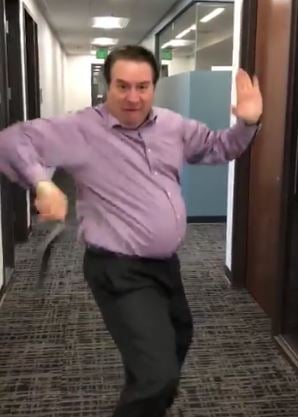 However, because the repeal bill legalising Michelangelo's weapon of choice does not take effect until 90 days after the state's lawmakers adjourn, nunchuk possession is technically still a felony which attracts a two and a half year prison sentence. And they remain banned in public buildings. Brnovich's spokesman said, though, that the current law allowed "demonstrations".

Commentators responded to Brnovich's video with a selection of their own, including clips of Star Wars Kid, a man riding a bike into traffic and David Brent dancing. But at least one admitted. "Honestly, I'm more impressed than I thought I'd be".

He looks like the lovechild of Michael Portillo and David Mitchell, though.

Where’s Shredder when you need him?

Where is my gun ?