A young solicitor's claims against her Managing Partner for wrongful dismissal, sex discrimination, sexual harassment, post-termination victimisation and holiday pay have been dismissed by an Employment Tribunal.

Permanent reporting restrictions were imposed when she lost her claim, prohibiting RollOnFriday from identifying the claimant 'Lucy', the Managing Partner 'Percy', or the firm.

Lucy joined as a 25-year-old newly-qualified solicitor in 2017, where she quickly formed a close relationship with Percy, who is the firm’s sole equity partner.

Percy and Lucy almost immediately broke professional boundaries, said the Tribunal. Lucy sent Percy photos of herself modelling clothes within two weeks of starting work, and the pair texted and swapped pictures late into the night.

The Tribunal agreed that 50-year-old Percy, who is married with children, had a "preference to recruit attractive young women". His fixation with glamour bled into the firm's dress code for employees, which stipulated that outfits had to be black, navy blue or charcoal grey.

His predilections also crept into the firm's Instagram account, where on one occasion Percy posted a photo of a chair in the shape of a woman wearing stilettos. He appended hashtags including “#sexchair”, “#slave outfit” and “#myslave”, which he said were in jest and agreed with the Tribunal were "not attractive".

But the Tribunal found in Percy's favour in relation to numerous incidents of misbehaviour alleged by Lucy.

She said Percy was “obsessed” with her clothing, but the Tribunal found that she volunteered photos of herself posing in risqué dresses. The boggle-eyed judges said they were "generally tightfitting with low plunging necklines and in one case the skirt part of the dress was entirely see-through".

Lucy's behaviour was not consistent with that of a genuine victim, said the Tribunal. After a great deal of harassment was alleged to have taken place, Lucy sent Percy a photograph of herself in a "strapless, low neckline, tightfitting dress" late at night. Percy texted that if she was going for the “chavvy hooker look” it was “spot on”, to which she replied with a laughing emoji that it was exactly the look she was after.

On another occasion Percy took Lucy to his multi-million pound house to work on a dispute that he was having with his neighbour. But contrary to her claims, he "did not suggest she swim nude" or sniff her hair, decided the Tribunal. 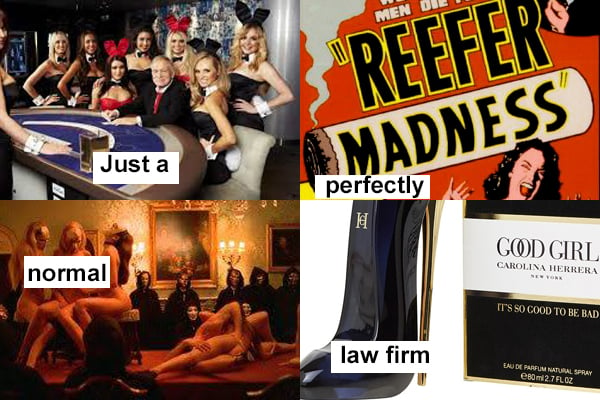 Lucy claimed that on a work trip to Amsterdam, Percy pressured her into smoking cannabis with him. But colleagues from the firm said that Lucy was equally as keen to get high as her Managing Partner. She ate most of a hash brownie which "made her feel very unwell", noted the Tribunal. Percy messaged her later to say that “you ate it like it was cheese”.

Lucy claimed that Percy took advantage of her while she was suffering a whitey to grope her breasts, and said she feared he was going to rape her. But the Tribunal preferred Percy's account that he was just checking her heartrate because she told him she thought she was dying. Lucy claimed that her memory of the incident was unclouded by her cannabis consumption. But the tribunal was sceptical, since she also said she was so high "she believed her dead grandmother was speaking to her".

Percy denied forcing Lucy to attend a live sex show on the same trip. He told the tribunal that three junior members of the firm had suggested the outing because they were "keen to 'experience Amsterdam'", so he simply booked tickets for everyone. The Tribunal agreed.

After taking Lucy to the sex show and sharing copious amounts of drugs with her, on his return to London Percy held a meeting with his business partners. They agreed that "as a solicitor", Lucy "should have handled herself better" on the trip, and decided to extend her probationary period.

Lucy was furious, said the Tribunal, and texted her boyfriend with plans to sue Percy and claim he was a cocaine addict to force him to settle.

Percy denied he had ever taken cocaine. He also denied Lucy's claims that:

The Tribunal accepted Percy's version of events. It said that Lucy's character was revealed by her admission that she had “thrown her secretary under the bus” when she could not find some important notes and accused her secretary of losing them. Lucy admitted to the Tribunal that she subsequently found the notes, but did not own up, and believed the secretary may have gotten into trouble for the false accusation. "It showed us that the claimant is someone who is prepared to look after her own interests at the expense of someone else, even if the truth is not upheld", said the Tribunal.

After she lied to Percy about reading a document and the amount of time she had spent on a matter, he sacked Lucy. A few weeks later, he received a letter at his home which read "next time photos". He also received silent phone calls and a death threat which included the Hindi for “motherf**ker”. Then the firm's website was taken down by hackers and replaced with a joke advert. After police talked to Lucy and her boyfriend, the incidents ceased.

Lucy denied being responsible for the campaign. But she admitted she told friends she wanted to "beat the shit" out of Percy and that “his time was up”. Her comments gravitated to dreams of “slitting his throat”, “throwing acid in his face”, and wanting him to go to prison.

The Tribunal dismissed all her claims. It said that although Percy "liked to surround himself with attractive young women" which "creates a questionable recruitment strategy", Lucy "is someone who on her own admission tells lies".

Percy and Lucy declined to comment, although RollOnFriday received an email from Lucy's solicitor which emphasised the penalties for breaching the Court order preventing her from being identified.

Extraordinarily, the SRA has given it all a thumbs up. A spokesman said, "We have looked at all the available information and decided to close the matter with no further action. If further information is made available, we can look again at the issues."

"After taking Lucy to the sex show and sharing copious amounts of drugs with her, on his return to London Percy held a meeting with his business partners. They agreed that "as a solicitor", Lucy "should have handled herself better" on the trip, and decided to extend her probationary period."

This made me lol. Bravo RoF, bravo.

What MP hasn't helped a new recruit feel at ease by gobbling narcotics with them at a live sex show?

And what NQ doesn't lie repeatedly to destroy their employer and their secretary? Par for the course. Definitely nothing for the SRA to concern itself with.

All pretty unsavoury stuff, but getting the secretary into trouble stands out.  That and trying to shake down your fun-loving boss based on a pack of lies.

This is absolutely incredible from start to finish

Helpful to know where the bar is set though.

But given what appears to be not in dispute I would have thought the SRA would have bounced the pair of them out the door quicker than...….

I have to say, anonymisation in judgments really isn’t effective is it. It has taken me less than 5 minutes googling to work out the firm, the claimant and R3 from some of the details not anonymised in the judgment.

I raise that not to encourage anyone else to do it. But more to make the point that now employment judgments are published online, there needs to be better standards / guidelines on how to write judgments to keep identities safe, if the judge rules (like here) that anonymisation is necessary.

Not sure why the SRA would be interested in him.

Sounds like an alright boss.  Unfortunately I'm an ugly old bloke so wouldn't pass muster at interview (unless I knew him at one of our parties; would have to conduct further checks tho, we tend to wear masks).

that sounds like a nice bundle to have to put together

Conduct unbecoming by all parties. Not the behaviour of gentlemen/women. They should be struck off. Furthermore, even if drug-taking might be legal in any of the jurisdictions they were taken, drug-taking should be a 'no-no' for anyone working in the law.

The other major error is mixing work life with one's social/private life. They should be separate. The only exception to that would be for ex-pats in the diaspora, but even then there should be boundaries. These frontiers were seriously breached by the parties and witnesses concerned.

"a special lubricant from Sainsburys"