The firms with the best scores (75% plus) for work/life balance in the RollOnFriday Firm of the Year 2020 survey had contended lawyers who recognised the faces of their family and friends.

At Mills & Reeve (88%) the majority of lawyers said that they didn't have to burn the midnight oil too often. A partner said he managed to see his "kids' recitals and school plays". One lawyer said he was "home to read my daughter a bedtime story", while another lawyer said he could "walk out at 5pm to complete Spider-Man again". Another junior lawyer focusing on his priorities said, "I've never had to come into the office at the weekend except when my internet was broken and I wanted to download a movie.” 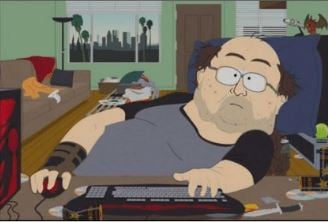 Work/life balance "is the absolute best thing about the firm," said a partner at Bristol headquartered firm Clarke Willmott (86%). "I work full time around life with two young children. I do this flexibly and with the complete support and encouragement of my team and managers."

Plexus Law (86%) also received a high rating for work/life balance, but for different reasons. “On the one hand it’s good that hours are only 9-5" said a senior lawyer "on the other it shows how little work half of us do.”  A female colleague said the “job feels like you're getting through a prison sentence, so escaping at 5pm just helps you survive”.

“I can still recognise my kids' faces” said a junior lawyer at DAC Beachcroft (85%), while a senior colleague said "my children recognise my face". Facial recognition aside, one happy lawyer participated in “subsidised yoga at 5.30pm, that even partners regularly make it to. Honestly, it isn't as weird as it sounds.”

DAC Beachcroft wasn't the only firm with lawyers willing to contort their bodies and breathe loudly infront of each other. A lawyer at Shearman & Sterling (84%) praised the firm for its "on-site yoga and massages". In a commendably high ranking for a US firms for work/life balance, Shearman & Sterling came seventh. Staff  appreciated the "emergency care cover for children of adults" and "24-hour GP access". One trainee simply accepted the deal: "You learn to explain to people on your weekends that you really have to keep checking your phone", she said, "missed calls from an angry senior lawyer demanding to know why you haven't responded to them are infinitely worse than irritating your friends.”

A partner at Trowers & Hamlins (85%) took some joy in witnessing shafted lawyers at a Magic Circle firm: "I walk past those poor sods in Slaughter and May who are still slaving away and eating in their soulless canteen (with the jukebox that never gets played) and a grim weekend of proofreading derivatives documentation in front of them". Perhaps with a cackle, she added, "I thank God that I work for Trowers! Also that I don't work at a firm that has a suppliers' entrance and a separate partners' dining room!" 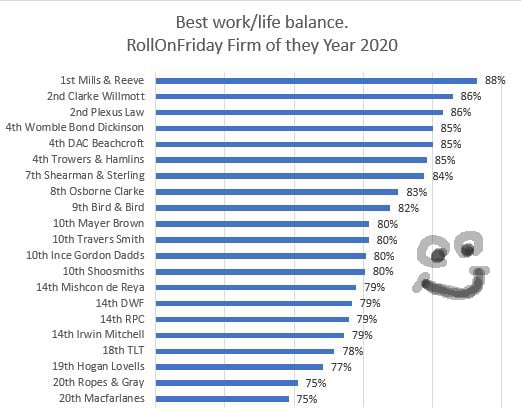 At Osborne Clarke (83%) a member of staff said "work hard, play hard sounds like one of those wanky things all firms say but at OC it's definitely true". Although one Bristol lawyer complained of regional difference as "London teams often come in later, work later with more social interruptions," resulting in Londoners "expecting colleagues in other locations to carry on working to match London's operating hours when we've already done our fair share for the day!"

"It isn't the cuddly 9-6 firm that sometimes people think it is" said a senior lawyer at Bird & Bird (82%) "those of us in top-tiered practice groups often work hours that better match silver and magic circle firms." But she acknowledged the firm helped out with family initiatives "including improving maternity/shared parental pay to 6 months full pay" and "4 weeks paid paternity".

"It's still a City law firm, so the work is demanding and the hours can be long," said a lawyer at Travers Smith (80%). "But on the whole it is a humane place to work. Agile working is encouraged with many associates working at least a day a week from home, which helps with this balance."

"We're not expected to put in extreme hours but so much time is wasted on pointless meetings that achieve nothing" said a frustrated partner at Shoosmiths (80%). Many staff praised the firm for its agile working, but one partner said the firm needed to invest in other areas to improve work/life balance: "the lack of BD/marketing resources means that partners have to fee-earn, supervise, manage, do strategy AND fly solo on business development."

At Irwin Mitchell (79%) a number of staff said there was "decent flexibility". But one senior lawyer complained that he couldn't get any work done "due to the endless admin and shit working environment - it's like trying to work in Wagamma at peak lunchtime with the lights turned up really bright - with the result that I have to work in the evenings at home to get anything productive on the sheet by the end of the day."

"I am delighted to report that we can now have sensible discussions about working from home and flexible work hours" said a partner at Hogan Lovells (77%) despite "our departmental head wringing his hands Cassandra-esque and proclaiming that the world would fall in."

Interesting comment from someone pleased not to be working for a firm that has a separate dining room for partners. I completely agree. The profession is in a pickle partly because of treating partners as if they are a different/superior species. Let the differentiation be the stack of money they take home and not overlay privilege as well. And the firms which still hold separate Christmas parties for lawyers and staff should also have a word with themselves.

Pretty sure the "Spider-man" game which the lawyer is referring to is Marvel's Spider-Man the PS4 exclusive from Insomniac, which means it is not a PC game, but a PlayStation game only. So the image is FAKE NEWS!

"A partner said he managed to see his "kids' recitals and school plays"." I love the fact that this tool offers this as some sort of example of an excellent work-life balance. Well done, loser - you're managing to do the absolute bare minimum that could be expected of an absentee parent. You should be so proud of your firm for its munificence with your family life.

"In a commendably high ranking for a US firms for work/life balance, Shearman & Sterling came seventh. Staff  appreciated the "emergency care cover for children of adults"".

Shame their policy doesn't extend to children of children.  Or adults.

Partner only dining rooms is not ok.

Surprise surprise- Bristol lawyers complaining about their London counterparts at Osborne Clarke. I work at a similar shop with regional offices and what the regional lawyers often forget is the goddamned London commute into the hellhole of the office- most of us have at least an hour long commute, often from outside of London, packed like sardines into a tin box where the only upside is we might catch Coronavirus and get a few weeks off work/WFH. So forgive us if we get in slightly later- we haven't done the 15 min stroll into the office. And yes, we work later to make up for it (and that helps avoid a similar hellish commute home with everyone else that finishes at 5.30 (which is the time my regional counterparts run out of the door most days)).

the 'social interruptions' - yes, there is an element of 'popping out for a quick drink and then back to the office' (because again, we can't pop home easily and then go out for drinks- we all live far away, but often this means the proportionately significantly more BD events that London lawyers are often expected go to because of the fact there are more of them. Yes, all of us really want to go these instead of heading home to our families.

I don't understand why Shearman, Travers and 2Birds rank so highly for work/life when they say they work MC hours and have to constantly check their phones on weekends? Do they mean that it's bad but is worse elsewhere?

The respondent from Trowers must really struggle to lug that giant chip on her shoulder past the Slaughters office every day.

Hours is not the only measure.  Pressure, flexibility, etc. all make a difference.

For Shearman, I suspect it is their hours/quality of life are a lot better than their peers at equivalent US firms on big salaries.

It is pleasing to see the progress made at Plexus as some of the nicest people work here. Is it perfect, no. But it is a lot better than the miserable few would have us all think. As for the woman serving her ‘prison’ sentence there, let’s hope she leaves soon. Most of the moaners have now gone and those left behind are now getting on with it and enjoying not being dragged down by the doom and gloom merchants. Anyone else who doesn’t like it should go elsewhere, please. And soon. The firm has been getting better and better as the miserables leave. Of note, most of the miserables have gone to the same couple of places (You know when you’ve been Tangoed - except they don’t ! )

These 'results' come as no surprise.

If one could drive (many of us urbanites don't drive!), the regions sound better than a London commute.

I hate commuting into and through London, which is a crime-ridden dump.

Those who are SPs at MC firms are stuck there, what with public school fees, the ski chalet and the house in the Cotswolds to pay for. Those who are in that situation are slaves at a higher level compared to those poor dhobi-wallahs who still haven't got 'higher' dining rights to eat with the senior officers.

My god that Shearman trainee sounds insufferably pompous. Nothing worse than someone who keeps reminding all their mates how hard they have to work - the self importance stinks

My only representation towards Spider-man is us associates at CGSH, London office, climbing the walls with frustration due the shambolic set-up of the partnership and directors alike.

They couldn't organise a pi** up in a brewery.

The comment about separate partners' dining room is a good one. Separate partner dining rooms show a total lack of respect to the associates who do the work. They are also pointless given that most people in MC firms eat at their desk anyway.

It's a minor point in the grand scheme of things, but does show the arrogance of some firms, and another reason why I'm glad I left the MC despite being a top performing associate there.

Key caveat that said explanation only comes when they say “stop looking at your f-ing phone and be with the people here” but you can’t afford to piss off someone at work :-( 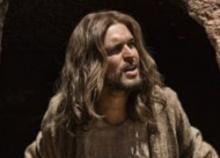 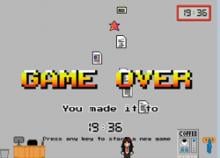