A firm has hired military veterans to toughen up its lawyers.

Paris Smith, which has offices in Southampton and Winchester, has commissioned three ex-soldiers to implement a mental resilience programme.

Tim Rushmere, a former Commando, Tim Boughton, a former Commando Pilot in the Fleet Air Arm, and Olly Church, a former Army Officer, all left military service with psychological injuries which, they said, they overcame through self-determination to build "a foundation of resilience".

Now that same mental toughness is going to be visited upon the soft-handed lawyers of Paris Smith. Citing research which suggested that nearly half of people living with a mental health issue hide it from work colleagues, Peter Taylor, the firm’s Managing Partner, said, "I want them to know how to manage any stressful situations, and to strengthen their resilience and wellbeing". 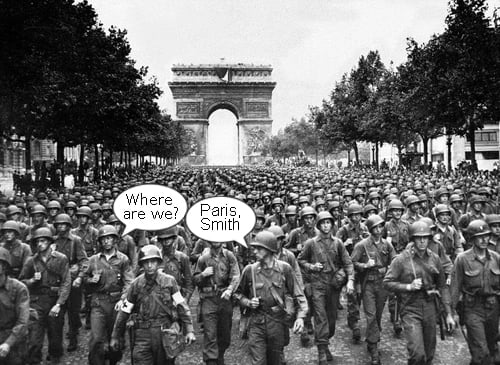 The exact components of the mental fitness strategy devised by the ex-soldiers, who operate as The Eleos Partnership, were not revealed. But despite appearances, the initiative will not encourage solicitors to keep a stiff upper lip. "I subscribe to the philosophy that a trouble shared is a trouble halved", said Taylor. "I want all our staff to feel able to be themselves and authentic".

“It’s vital to remember that no one is invincible", said Boughton at the launch. "We train our bodies to be fit", he said, forgetting his audience, "but do we train our minds to be fit, too? We need to apply the same approach to both".

If you'd like to discuss your mental health and don't have a paratrooper handy, give LawCare a bell.

That Winchester legal market is particularly vicious these days

It's not better resilience people need but better working conditions. No amount of resilience makes a completely unreasonable situation reasonable.

Has the topic struck a sensitive nerve with the author? If so, perhaps the contact details of the Elios Partnership could be made available?

If the subject matter of the training was racial or sexual discrimination, would it be subject to ridicule by ROF (regardless how harmless)? Regardless whether you subscribe to the level of attention the topic is receiving currently, mental health is a very serious (and topical) subject as we all know and perhaps straying into this area (regardless of it being a Friday) is a questionable faux pas in my humble opinion, particularly when producing an article praising firms for (correctly) promoting 'work/life balance' moments later? I suspect the training was for the benefit of the employees and therefore a positive move by Paris Smith surely? Choose a path and stick to it......

Amazing how po faced some people are. Riffing on the fact they’re soldiers isn’t laughing at mental health issues.

If there was a greater focus on treating associates like human beings, we wouldn’t need this resilience training ... The mental health stats for lawyers are terrible and it’s not because all these lawyers just aren’t resilient enough.

” If there was a greater focus on treating associates like human beings, we wouldn’t need this resilience training ... The mental health stats for lawyers are terrible and it’s not because all these lawyers just aren’t resilient enough.” Sounds like you have a nettle to grasp with your firm (and perhaps the industry has generally, not just at Associate level but at every level), but not all issues are internally generated. Many can be client generated surely? Knowing how to handle demanding, difficult, unreasonable and frankly stressful clients is surely a skill any lawyer, regardless of ‘years in the field’ would benefit from?