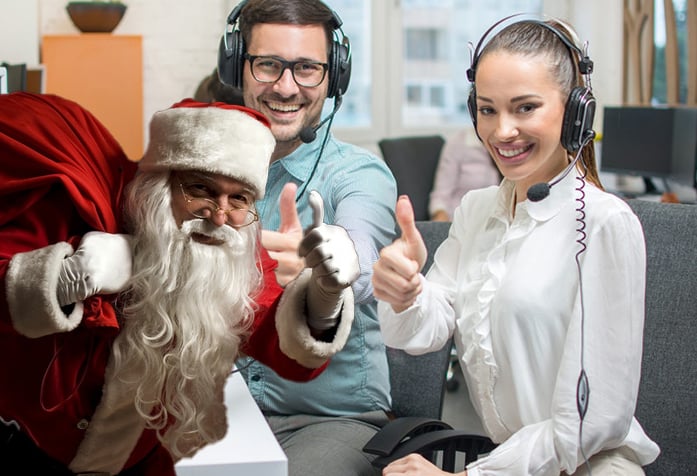 The pandemic may have killed off this year's office parties, but it can't stop lovely law firms spreading seasonal cheer all over their staff.

At the top of the Christmas tree is a group of Osborne Clarke partners who have put Santa to shame, as far as their associates are concerned. "All fee-earners in the team bar one requested the full two weeks off for Christmas", an OC lawyer told the RollOnFriday Firm of the Year 2021 Survey (which is open now, do take it below). A scheduling disaster bound to leave several lawyers disappointed. Except "the partners' response was that they would provide all cover for our matters for that period. We were blown away".

Other staff chimed in to say that not only had OC dropped pay by just 7% during the summer, it had started repaying it, "and we're getting the first chunk of that back in time for Christmas shopping". OC, they pointed out, also repaid the government its furlough cash. "This has felt like a good ship to be lashed to as we ride out the pandemic storms".

In the City, Macfarlanes has been dropping stocking fillers on staff like an indulgent parent, much to their delight. "Little bonuses here and there", said a business services employee. Macs "upped the £100 Christmas voucher gift to £150" due to cost savings on the Christmas party, and has now "given everyone in the firm a further £500 (on top of the £200 we were given in March) to improve our home working setup".

At RPC, "they've played an absolute blinder", said a senior solicitor. Gliding into Xmas with a warm feeling because agency staff had their salaries topped up to 100% by the firm and full of "the surprise hamper of tea/biscuits/chocs that arrived mid-lockdown", staff were given a second day's holiday to coincide with "the Christmas Covid Carousing period".

"'Bread and circuses', you may think", said an RPC solicitor, "but it shows that someone in management has taken the time to think about staff, and spent some money on them."

Covington & Burling also distributed Christmas hampers in lieu of a party, which was a "nice touch".

Other firms took a different route and embodied the 'funny' uncle, to mixed reviews. "No Christmas party this year (for obvious reasons)", said a junior solicitor at Charles Russell Speechlys, and "instead of offering us all some sort of alternative goody", CRS asked staff to "send them pictures of us being awesome".

"The usual extroverted keen beans will be awarded with prizes in some sort of peculiar virtual awards ceremony", said the lawyer, "and we are all supposed to pretend that's as good as getting drunk off our faces on Company booze."

At BLM, staff have been enjoying a virtual advent calendar, the first day of which was "an Elf Yourself of the exec board".

"I'm sure we'd all rather have that than any form of firm-sponsored team activities like wine or cheese tasting we've seen at other firms", said a BLM employee. "That said, the camaraderie within the team is a positive." Can't unwrap camaraderie, though.

"I did laugh at the e-mail we all got that said, 'we would like to send you a gift given we aren't having a Christmas party, but understand some of you won't want a gift given the pandemic, so can instead make a donation to charity'", said a lawyer at Clifford Chance.

"Obviously everyone was guilt tripped into saying 'give a gift to charity' (we are all massively well paid lawyers, why would we say we want some crap we don't need?). We then got a second e-mail basically begging us to take the gift..." Please, someone tell ROF what that gift was.

But wait. Maybe the debauched office party is not dead, after all. A cunning team at Addleshaw Goddard has been "considering whether to use the business exception to have a Christmas lunch", said a solicitor, "which would mean 30 people could gather round the same table inside instead of 6". Merry Christmask, one and all.

Did your firm gave you a PS5-level prezzie, or a Cyberpunk 2077 one? Let ROF know in the comments or write in.

Our firm have arranged for the partners to have a jolly cook-a-long with a celebrity chef.  We get to watch (isnt that why Food Network was invented) We can join in but we have to buy the ingredients ourselves from a supermarket.  Seasons Greetings to all.

To be fair to BLM, they have given us a £50 gift voucher.  I was pleasantly surprised at the amount given how cheap they usually are, I was only expecting £10 max.  Not so much as a Merry Christmas from the partner of my department though so swings and roundabouts.

The advent calendar is a bit pants though and the "elf yourself" was pure cringe.

Tbf, surprised they parted with cash instead of offering a 3 year vesting period for 35 quid of shares.

The partners at BLM have been doing this for years to meet their billing targets.

Interesting that RPC have played a “blinder” by actually paying their staff 100% of their salary. What must the interviewee think about those firms who actually continued to pay their staff their full salary throughout the whole year. Also, how bad has it got that people at Macs are celebrating getting a £150 voucher instead of one for £100. US firms just paid COVID bonuses of up to $40,000 this month, with the usual annual bonus to follow.

BLM.  If it was a colour it would be the colour of sadness.

Hahahahaha. I'd go for something more like "interminable sadness tempered with (misplaced) optimism."

Still waiting for Reed Smith to send through our Xmas presents. Any day now I’m sure!

CMS staff received an unexpected £100 payment into accounts this week.  A nice gesture.

The CC Christmas gift was a hamper with all products from social enterprises. It came with a booklet showing what the money was going towards, info on each business and how it's making a net positive impact. It was actually really lovely.

Just buy people some nice stuff if you want to send them a Christmas present. No need to send them a glossy leaflet that explains that you're a really great guy for buying it for them because the 'social enterprise' that flogged it to you donated three pence in every pound towards surgery to dig botflies out of the diseased eye-sockets of deaf children in the Kalahari (or feminism lessons in Surrey schools, or whatever).

Christmas is about sending people nice stuff, not about wanking off over buying overpriced gift items that let you pose as a world saviour. You want to save the world, just write it a cheque. Don't make me watch while you interfere with yourself as you do it.

So next year, Cliff, just send me nice cheese in a wicker basket. I don't care if it empowered transgender cattle from disadvantaged backgrounds. I just want free cheese.

At CMS in IP we had a virtual disco and selfie booth and food sent to us if you wanted food. There was taxable I suspect Christmas bonus of £100 even though Stephen Millar said the company was in good shape financially despite covid and Brexit. I guess Father Christmas only saw it fit bit to pass it along.

Anonymous @10:38, RPC topped up the furloughed agency staff salaries. People not directly employed by RPC, who would otherwise have received 80% of their wages, have been paid in full since the start of lockdown. No obligation to do so, but it was a classy move that was well received by fee earners and support staff alike.

At Keystone we had a wonderful hamper of goodies and a couple of bottles of lovely wine (on top of the vintage champagne they send on every birthday and each time you help out with one thing or another). Keystone Arms (our virtual fortnightly pub) opened to host the virtual Christmas party last night - if you can’t catch up in person this was a fab way to bring us together (and if you don’t want to join in or stay long then no pressure). I genuinely like my colleagues so actually it was a real treat.

Further to 9.13 the celebrity chef is booked for Tuesday.

However will he now travel up from Devon to London breaking the tiers rule?

If he does this could be embarassing for both him and the firm involved, watch this space...

@anon 10:38 Macs still giving a healthy bonus on top of the vouchers - better than most UK firms

How many Tic Tok?

"All fee-earners in the team bar one requested the full two weeks off for Christmas", an OC lawyer told the RollOnFriday Firm of the Year 2021 Survey (which is open now, do take it below). A scheduling disaster bound to leave several lawyers disappointed. Except "the partners' response was that they would provide all cover for our matters for that period. We were blown away".

At Pinsent Masons, business development staff were told to remember their Xmas do was 'BYO drinks and nibbles' until many of them raised concern that other teams across the firm were receiving hampers and various other parties, including gifts. Cue an 8pm email from the head of BD the night before, saying they could spend £35, but it had to be spent that day due to gifting policies...

This article isn't 100% accurate regarding RPC.  The agency staff who had been working in the restaurant were laid off just before Christmas.  Someone in the HR team is getting slightly ahead of themselves.....

Freeths gave everyone xmas eve off and a £25 voucher for John Lewis. Christmas party delayed until next year. All bonuses paid and some small salary increases so not all bad considering.

Probably need to look back at what used to make Freeths a genuinely nice place to work, then do that! Lost its way a bit at the moment.