A video call between legal types has been doing the rounds due to the presence of an unwitting naked participant. It was bound to happen.

The perils of home-working were exposed in a Zoom video conference call where those attending where aghast/delighted to see a colleague wandering around in the buff. It is understood to have been a call between legal sorts, with Civil Procedure the intended subject of the call (before a willy derailed it), and what appears to be the Lexis Nexis logo can be seen in one of the tabs.

The video starts with the host leading the call with some small-talk. No one mentions the fact that 'Ben', in the bottom right hand corner window, is topless. That becomes impossible to ignore when he rises, completely starkers, and his meat and two veg waggle gently on the screen.

Despite extensive blurring, YouTube's been quite keen to delete this vid, so if it disappears, well...it's a blessing frankly.

There are gasps of surprise and nervous laughs as colleagues exclaim, "Oh my God", and "Ben!" The leader of the call implores, "Let's make sure everybody has clothes on", but it's far too late and Ben is not listening.

Apparently unaware that he can be seen by his colleagues, he proceeds to wander around his room naked, bending and stretching in the background. His colleagues either try to avoid looking at their naked peer, or laugh in shocked amusement. 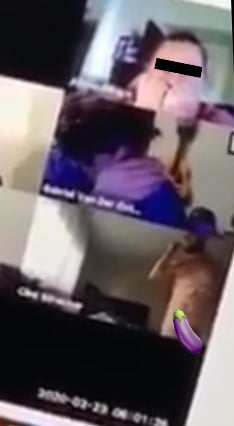 This isn't the Christmas party, bud.

"Your video is on," shouts one startled woman, but he's still not listening. Giggles continue, and the video cuts out before it's revealed whether Ben was ever made aware he was being That Guy, or if he's still still not put the boys back in the barracks.

For a guide as to the appropriate attire for work conference calls, try the Zoom suit.

Probably been wanting to do that for years.

As to whether or not it was on purpose, presumably we just need an unredacted copy of the video to check whether he indeed has balls of steel

Jamie has all the answers about this chap's genitalia. Please keep asking.

Jamie, how does it taste? Asking for a friend.

As funny as it seems - how could the one filming the whole situation know in advance? Ben wasn't the only one who knew.

This was a law school class, not a work call. "Civil Procedure" is the class and "Winter 2020" the term. This has been doing the rounds in US law schools for a while.

Everyone else appeared to be in mufti, so they either have a dress down (but not undress) policy. or they were students as Anon on 8th inst. at 20:20 says.

And the call just so happened to be videoed?