Skip to main content
Exclusive: Law student's mum overshares on Twitter
A mum has been tweeting at barristers and Freshfields telling them how clever her son is and asking them to employ him. RollOnFriday feels for the boy.

On her twitter account, 'Claire' describes herself as "Proud Mummy to my gorgeous son who is studying Law".

Claire has been boosting her son on social media since he got his amazing exam results. Not that the press cared. 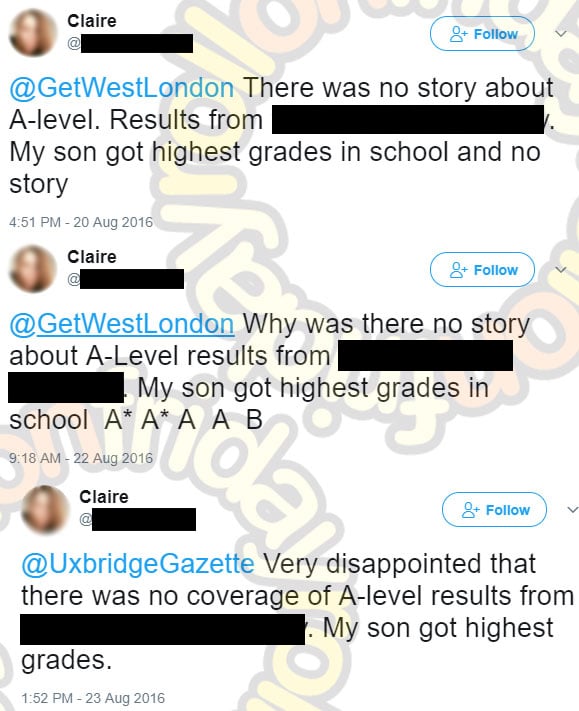 Her son, who RollOnFriday will call 'Steve', shares Claire's tweeting attentions with cast members of Goggle Box, Britain's Got Talent and Richard Osman, who was the first to hear about Steve's early law success. 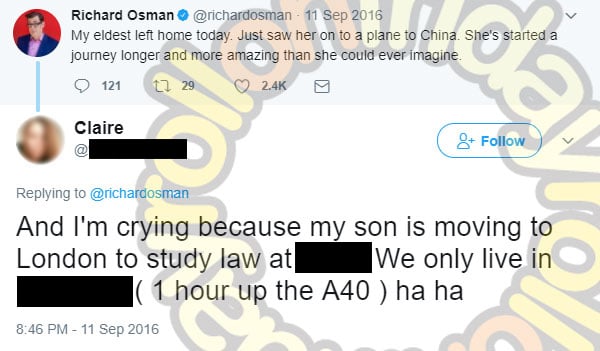 This week Claire asked Freshfields why it had not invited Steve onto its vacation scheme. In a sweet exchange which will have Steve pulling his hair out in clumps, his mother was told she was three months early and then accused the Magic Circle firm of being mistaken, simultaneously reminding it that her son had performed superbly at a Freshfields workshop. 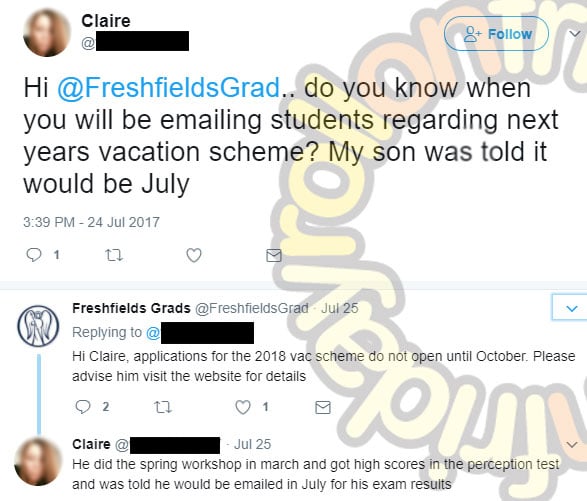 Because a mother's love knows no limits even when it should, she also attempted to bribe a barrister with some M&Ms in exchange for giving Steve some work experience. 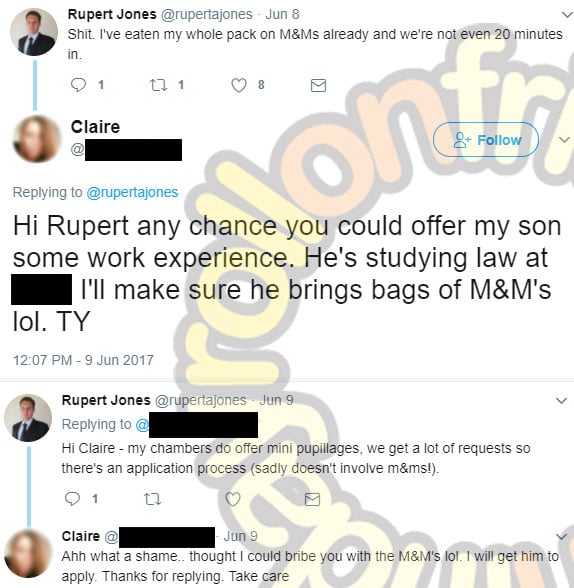 It is not known whether the law student is grateful that his mum has access to the internet and is using it to be the most mum of all mums, or if he finds it absolutely excruciating. It is probably the latter, particularly when she tweets young women asking them to help her, help him. 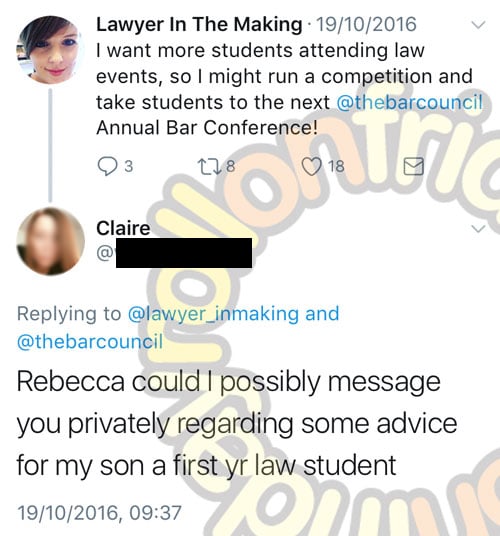 Claire has also tweeted her son's university asking it what law books Steve needs to bring. And his future law professor to tell him, "My son will be seeing you next month. He got the highest results in his school". And the Bar Council. Lucky lad.

If you are in a position to interview Steve for work experience at a law firm or chambers, let RollOnFriday know and we'll pass it along. Go on, get his mum off his back.

Well meaning - she is just being very mumsy.
346
Vote up!
353
Vote down!
@Anon 09:59 - suspect he's quite used to being mortified. The Mum may have learned her lesson. Locked her account and changed her profile pic.
343
Vote up!
348
Vote down!
Another article that Legal Cheek has stolen from ROF
364
Vote up!
358
Vote down!
Cracking article
329
Vote up!
373
Vote down!
Love it. Bless her.
344
Vote up!
389
Vote down!
Oh dear. I wonder what subjects his grades were in by the way and which university he is at.
355
Vote up!
358
Vote down!
I imagine she's learned a valuable twitter lesson. Hope her son has a sense of humour about it. If I was him, I'd frame those tweets.
364
Vote up!
365
Vote down!
It won't affect his career at all. This will be forgotten in a week
355
Vote up!
339
Vote down!
Bit late to redact it now, surely ROF? You published it in its entirety to start with.
326
Vote up!
368
Vote down!
Her posts were public and entirely harmless, so we published it as was. But she called us yesterday and asked if we'd redact it, so we did.
349
Vote up!
357
Vote down!
haha worth interviewing him just to get the helicopter mum for free. Spiffing entertainment in one's drab life
367
Vote up!
357
Vote down!
Hopefully, it's just a spoof account!
325
Vote up!
368
Vote down!