A BPP grad has accused a trainee solicitor of lying about experiencing discrimination and racism.

Greg Sinclair, who writes in his LinkedIn profile that he is an aspiring barrister with experience in PR and diplomacy, made the claims in response to a post on the public forum by a law student who was celebrating landing a training contract.

Shez Anjum wrote, "Throughout my journey in law so far, I've experienced people going above and beyond, giving me opportunities and chances but I've also experienced discrimination and racism. However every experience has been a lesson and a motivation to believe in myself and push myself to be the best I can be whilst staying true to who I am and what I represent".

Hundreds of people liked Anjum's post and dozens congratulated him. But Sinclair replied, "You haven't experienced racism. So that's a lie right off the bat. It's simply a cudgel you're using to get your way". He claimed that Anjum could not have experienced discrimination because, "That sort of discrimination is illegal". 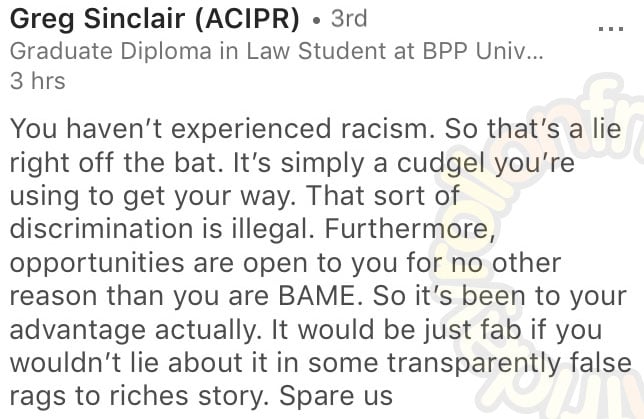 A solicitor, Simarjot Singh Judge, intervened to suggest that "Dimming someone else's light doesn't make yours any brighter". Sinclair replied, "My future's plenty bright". Then he suggested that Anjum was a "falsifing goon", whereas Sinclair had earned his success without being "the undeserving benefactor of leg-ups from people I call racist and colonialists". He added that "bleating on about 'muh discrimination'" was "a pathetic tactic designed to advance your careers".

When Simarjot replied, "Don't you worry that your rants will be viewed by prospective employers?", Sinclair responded, "No I don't", then claimed that Anjun was "making it up" and "is therefore a person of low morality, and should under no circumstances be allowed to practise law". 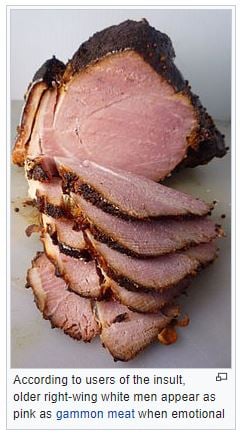 Anjum, who confirmed to RollOnFriday that he and Sinclair do not know one another, dropped into the fray only once. He wrote, "Dear Greg, your comments say more about you then they do me and actually reinforce my post, so thank you. I wish you every success in the future. Kind regards, an undeserving benefactor of leg ups".

Sinclair has given diversity a few kickings on the networking site. In response to a woman's post celebrating her appearance on Channel 4 News to discuss the importance of diversity in the field of medicine, he wrote "There are no impediments whatsoever to diversity... In fact, there are incentives which are accessible to you and not to white people on the grounds that they are white". When a barrister mentioned that a judgment had referred to the Satanic Verses as anti-Islam, Sinclair informed him that Muslims "like to denigrate everyone else's beliefs so they too, need to accept denigration with poise". When the brief protested that Sinclair had misunderstood his post, the BPP grad responded, "That someone so duplicitous should be called to the bar is frankly shocking".

Sinclair did not respond to a request for comment. Here, have a spat: 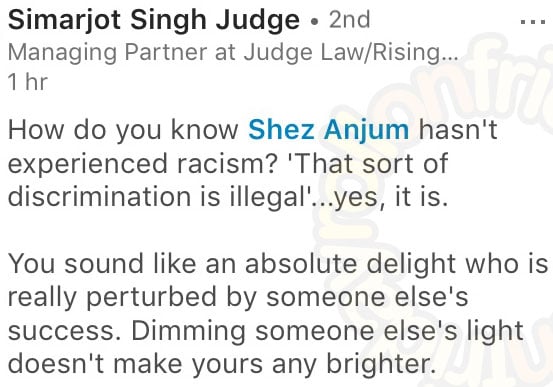 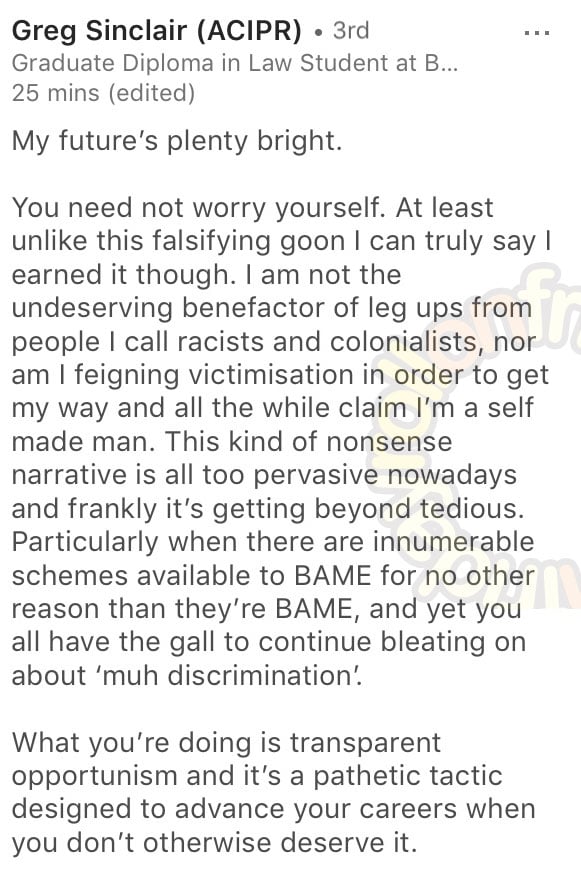 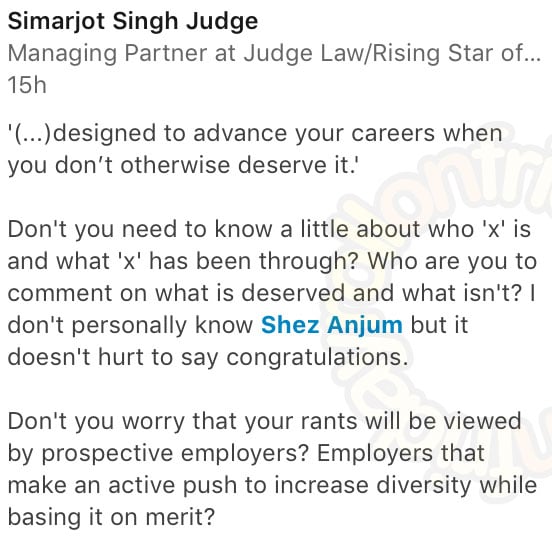 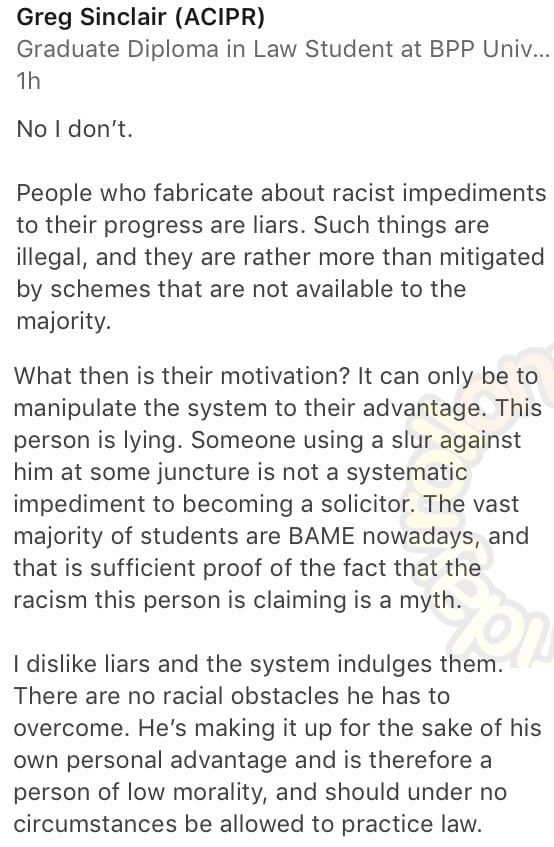 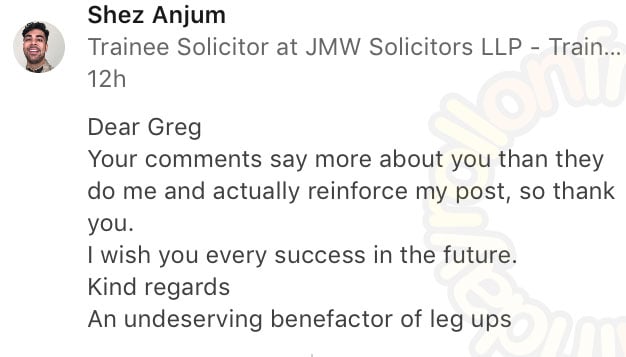 Having worked with Shez for a while now I can add a personal touch to the post.

Greg, if you read, this have a think about what you propose to bring to the legal industry and consider do we really need you and your views?

Have we sussed Greg's ROF handle yet?

I didn't have my bike nicked because bicycle theft is illegal.

Awww Greggy, such a little snowflake. Someone needs a big huggy wuggy :)

PRAISE BE! RACISM IS OVER!

"I am ..... an accomplished communications graduate"

Nearly shat myself reading this line in his linkedin profile.  Don't think so m8.

I’m spotting a theme in terms of the people with whom he has issues.

So the wierd little fascist teenagers from twitter are growing up into wierd little wannabe lawyers on linkedin.

A few more consequences to doing that in your own name than some nonsense with a stupid anime or frog picture.

This quote sums it up better than I ever could:

"When I was a child, my father used to take me for walks, often along a river or by the sea. We would pass people fishing, perhaps reeling in their lines with struggling fish hooked at the end of them. Once I saw a man take a small fish out of a bucket and impale it, still wriggling, on an empty hook to use as bait."

Shame Shez is a Gooner though

I'm glad this got the coverage it did. I couldn't believe what I was reading.

This is a wonderful example of how not to use LinkedIn.

Holy Mackerel! I can foretell Mr Sinclair's obituary: "was a BPP grad and died one".  Lighten up, fella. It's seem an horrific attack has been laid at Mr Anjum's door without any justification.  Sinclair doesn't even lay claim to knowing him personally.  What a proper Womble.

Quite. It's one thing to be a fascist who one day will be in the process of applying for pupillage, it's on another level of f**kwittery to use the world's largest professional social media platform to advertise the fact and create permanent evidence that you're a fascist who will one day be applying for a pupillage.  Would fail the "good judgement" test of any interviewer.  Does a Masters communications degree not include a module on "keeping your thoughts to yourself"?

That aside, any thoughts on the post neggers?  Elfi and OGR obviously.

this work experience at daily mail group might be a clue?