A lawyer has posted a video of himself raging at airport security staff after they searched his luggage.

Sham Uddin, barrister, entertainer and Bengal Tiger, had his bags searched by a border force officer at Birmingham airport after a flight back from Dubai. In a post on LinkedIn Uddin complained that he was "unnecessarily stopped" by the officer who "wanted to check all my luggage...seven in total".

In the footage, Uddin appears to be in a secure area of the airport and explains to the camera that an officer is checking "every one" of his bags "because of the fact that I said I had a taxi waiting". The officer clarifies to Uddin that he's checking the luggage "under Section 78 of the Customs and Excise Management Act", and also says that recording is forbidden. But Uddin carries on filming.

"I'm telling you, either call the police, or check my baggage", Uddin commands the officer, who responds wearily, "I don't need to call them, as I can act as them as well". Sacrificing himself as a civil rights martyr (in his mind), Uddin begs the officer: "Arrest me! Arrest me!"

But the clip then cuts to Uddin, apparently set free, saying "once I've started recording them, they've backed off". 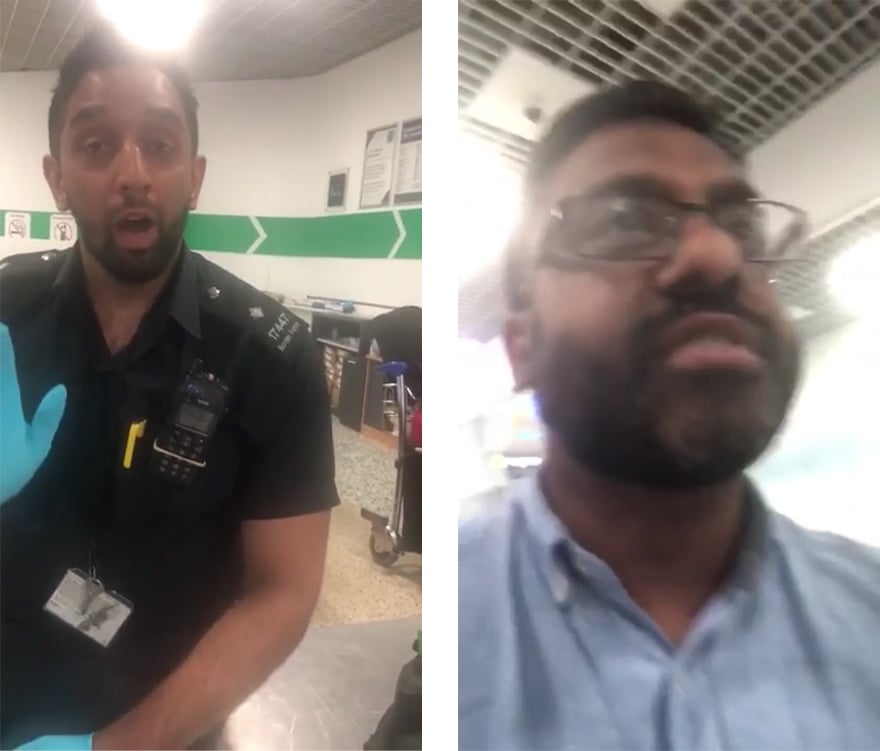 The footage, which has amassed over 19,000 views on LinkedIn, can be seen here. [Update: Uddin's post containing his video was yanked following publication of this story]

Not everyone believed that Uddin was a victim, like barrister Adeel Rashid. 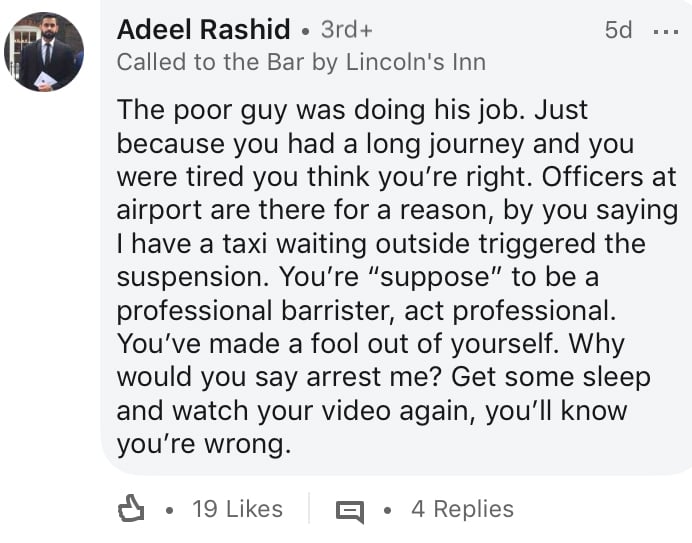 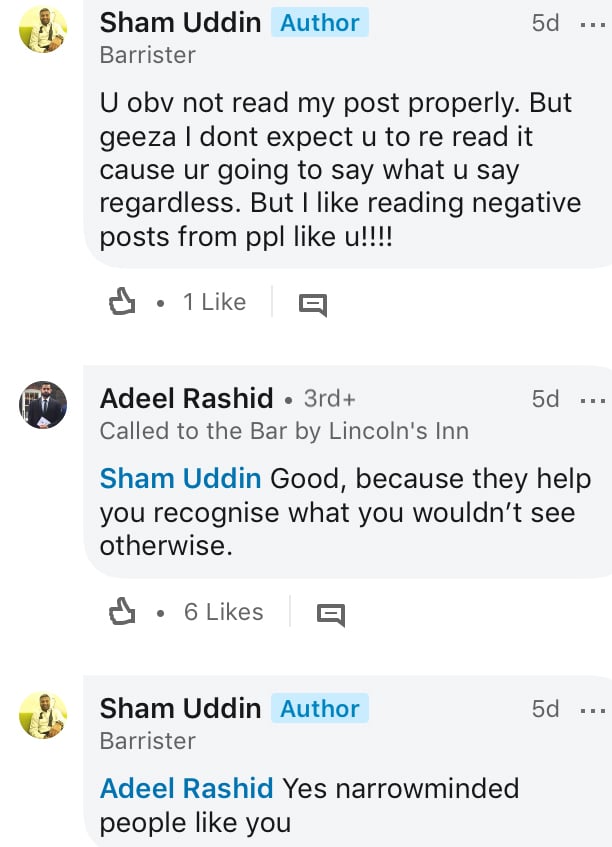 When another person queried his account, Uddin explained that he would have had no objections to a finger up his bum, if it was justified. 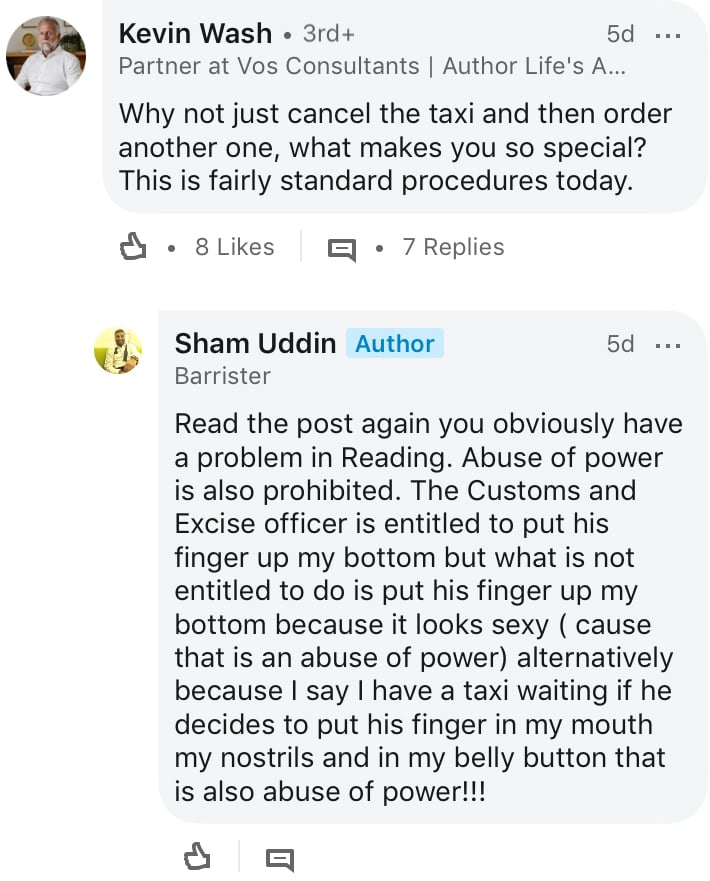 One commentator was interested in finding out more about Uddin's luggage: 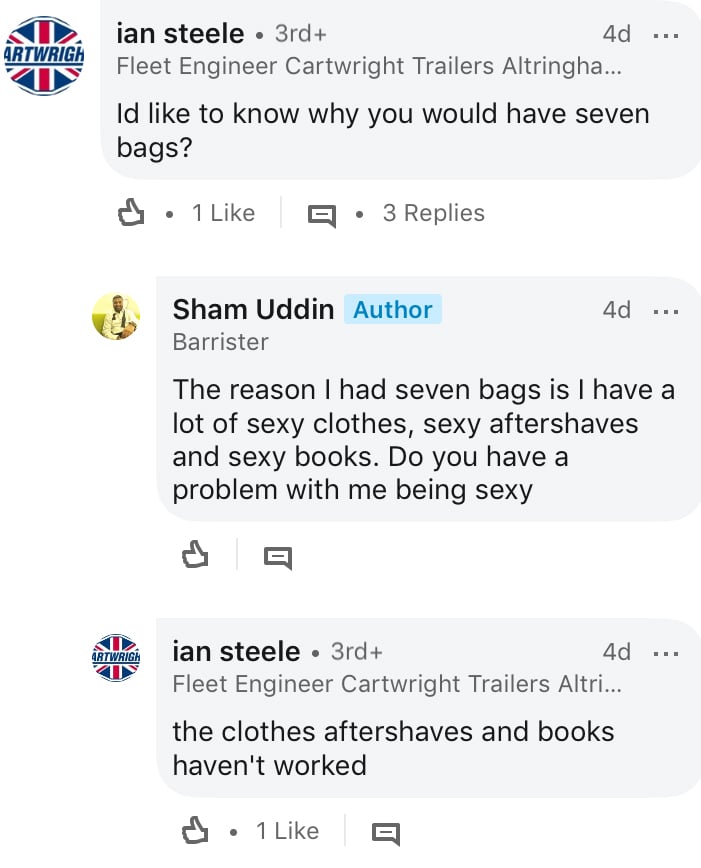 Others were more brief in their analysis: 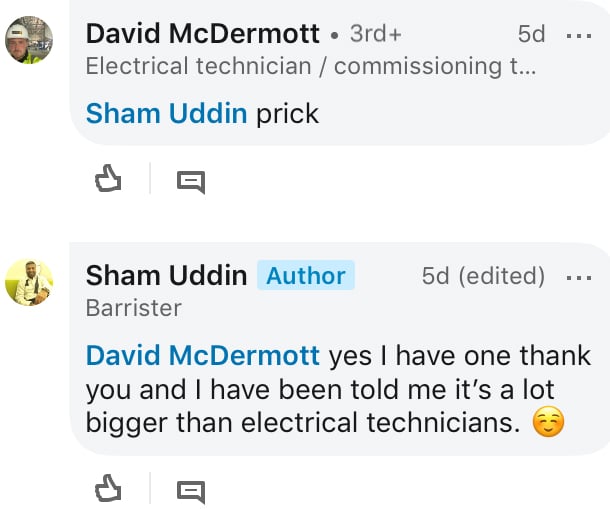 Uddin did not divulge the circumstances that gave rise to such a specific comparison. Batting back the haters, Uddin claimed that his film had been good for business:

He has now followed George Michael's example and set his experience to music, dressed as a cop. 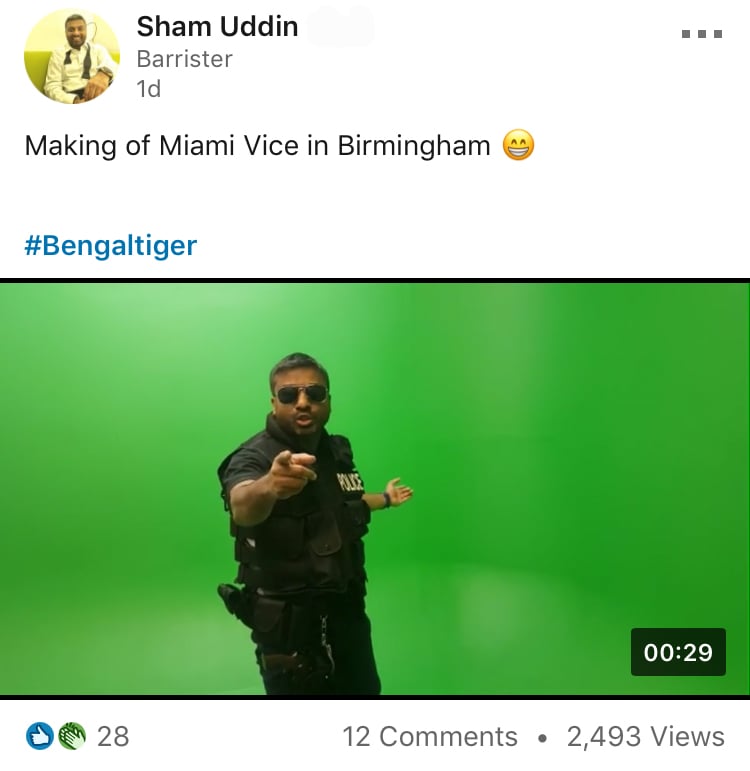 “Border Force’s priority is to maintain security on the border at all times" a Home Office spokesman told RollOnFriday. "All those arriving in the UK are examined and checked against Home Office databases" he said, "and passengers’ baggage may also be subject to checks to ensure that banned and restricted items are kept out of the country.”

The spokesman added, "Anyone who is unhappy with the service they have received from Border Force can ask to speak to the duty manager at the time or email [email protected]".

Uddin is not the first lawyer to engage in verbal jousting with airport security over a baggage check.

Feel sorry for the security officer who was just doing his job and following his training.

What an utter [email protected]

This guy is a total joker. Surprised he could tear himself away from litigating such epic disputes such as ‘Kev sues Bev over boundary wall dispute’. He thinks he is big time but he deals with total trash. Seems to cover every area of law too.

What an utter fruitcake. Totally bizarre.

This chap loves attention. It will be his undoing.

You would have to really dislike a client to instruct this clown - if this his reaction to an authority figure god only knows what he's like before a Judge!

You can tell by his uncalm voice and his "call the police" weird request that he is very tired and in a bad mood. Also who has 7 bags? That is really weird and surely more than enough reason to pick him in case they contain 6 bags of smuggled stuff and just one with his normal things.

He doesn't have "normal" things, Lydia.

You must read the story.

There will always be those that think they ought to be excluded from security checks, especially when it causes inconvenience. If that was the criteria for us when we carry out our checks, I suspect we would no longer have a standing Houses of Parliament. Maybe we ought to put him in charge of customs checks and see how he would react if someone put forward to him a reason for his passenger check not being carried out and he is then blown into a thousand pieces as he was unfortunate enough to later travel on the same train as the passenger!

Wow, absolute unanimity in comments and upvotes. ROF 53 - 0 Sham at this point.

If someone tried to give a reason why they should be moved through security/customs checks faster to me, I'd definitely check their bags too.

What a sad little man. It’s astounding how many follows and props he seems to get on LinkedIn. Droves of fellow fools legitimising this clown’s nonsense.

Now I got the full search when I had sexy things in my hand luggage once too, going through City with a group of work colleagues. Steel butt plug, some leatherwear, a scented massage candle, exotic lube that sort of thing. Enormous scope for total humiliation. But the trick, as any good ex-public schoolboy knows, is to stay calm. Be polite, Smile, front it out and keep up the charm. Bar the discrete security chap no one was any the wiser.

Compare and contrast with the poor Scots businesswoman a few months later whose carry on bag exploded in the xray tray area sending her collection of vibrators for all occasions spinning over the floor to every corner of the security hall. Ouch.

Isn't this the Ferrari driving bloke?

Holy cr*p - What has happened to the Bar Standards Board.

Looks like the same Customs guy who searched by bags at Birmingham, also upon my return from Dubai.

He swabbed the bag and found traces of cocaine, double checked and had a quick sort through the bag, not even checking pockets.

He asked me when was the last time I came into contact with anyone who had recently been in contact with Coke, I said have been in DXB so before then ( maybe 8 months) and most recently given his job probably him.

He laughed suggested I burn the bag before returning to DXB and told me I could go.

To this day I have no idea where the traces came from, but would have been a nightmare if it had been swabbed at DXB as I have no doubt I would be roffing from The Dubai Hilton.

...I'm still waiting outside the airport....next time walk home (bags and all!) you lazy sod!

Can you imagine if this was a Solicitor? SRA would have him ousted and rightly so. BSB any comments or is this appropriate behavior?