The firm's website takes a similarly traditional approach with a two tone colour scheme, a logo that is reassuringly 19th century and a blurb which confirms, somewhat redundantly, that Dixon & Templeton is a “traditional firm”.

But don't mistake their lawyers for technophobes. Partner Stephen Wyatt is "one of the Solicitors in the Firm who uses a computer with voice recognition software": 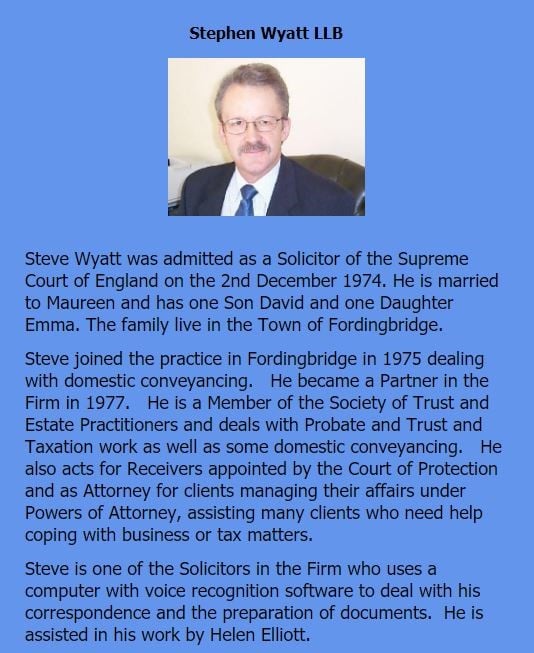 In fact Dixon & Templeton even has a page dedicated to its technology, which includes "a specialist computerised solicitors accounts system" that records transactions and "also incorporates a sophisticated time recording system". 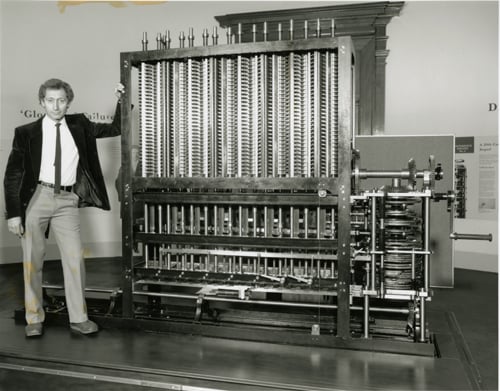 The firm also has "an extensive conventional legal library which includes law reports going back to the 1800's", supplemented by "volumes on computer disk". 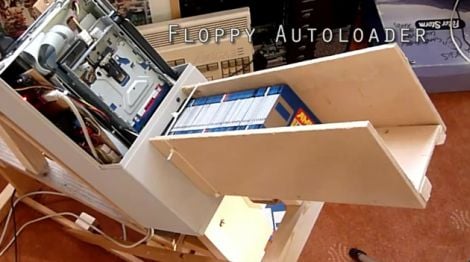 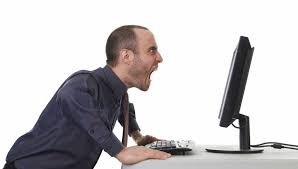 Although the firm may be proud of its technological accomplishments, it hasn’t lost the common touch. In the profiles section, readers learn about detailed office arrangements such as Brenda being "able to step in to cover when Richard is away". 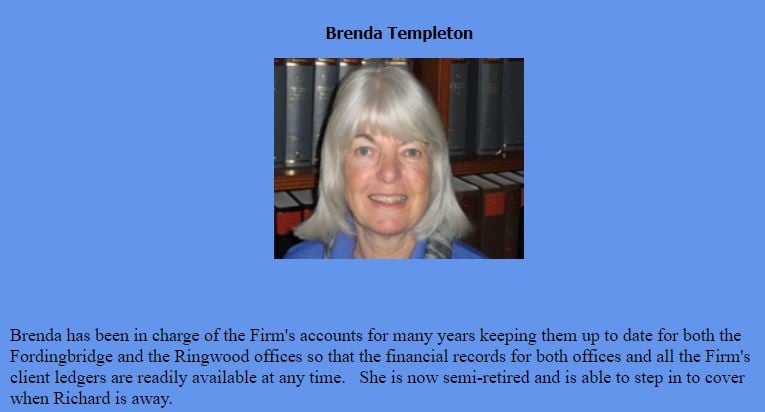 TMI but in a sweet way.

And office manager Sally keeps "everyone on their toes". She knows all the office (and town) gossip. 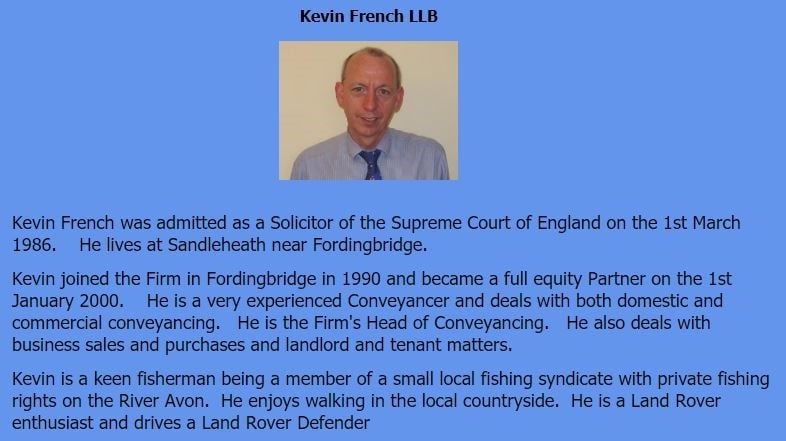 It is not known whether Dixon & Templeton is video-conferencing in the lockdown or sending Betamax video-cassettes to each other via pigeon-carrier.

The firm's wonderfully old-fashioned site can be viewed here on your Commodore 64.

If you've seen a legal website worthy of inclusion in the Bonkers hall of fame, let us know.

This seems a bit mean-spirited given RoF is reliant on hamster power at the best of times.

This is actually quite sweet in a very odd sort of way.

True, pumpkin. True. Tbh there’s a lot of respect here for these guys refusing to bow to modern expectations.

Hats off to them.

At RoF followers can be reassured that big firms don't do hype...

Looks like they’re also refusing to bow to the fact that Receivership went the way of all things getting on 15 years ago.

Looks fine to me although if I were Wyatt I could get rid of a lot of capital letters he seems to place randomly on nouns.

Putting this firm/its website in the "Bonkers" category seems a bit mean-spirited. Not everyone can spend millions of pounds on IT and marketing, nor do they have to, to run a viable business.

Maybe I am suffering a sense of humour failure; maybe the individuals waking up to find their profiles read by thousands of people this morning will share the joke and be pleased about the publicity. If they care at all.

Do the people who write this guff realise there are actual real life law firms outside of the ones in "Inside Info"? Some of them deal with actual real life people. Like consumers. Who want to buy a new house, or maybe make a will.

It's true. Honest. I'm not making it up. Lawyers actually do this stuff. And get paid (although not very much).

I think it's cute.

I agree with the comments above.

Don't get me wrong, i enjoy the bonkers websites as much as the next bored solicitor but this article feels different....this isn't mocking a law firm who has wasted thousands on  "brand awareness training" and stupid stunts to look "hip" and "down with the kids" - this is a small local law firm which is no doubt impacted, as we all are, in the current climate.

ROF - you missed the mark with this one...

A poorly chosen target ROF.  By all means take the mickey out of firms that are up their own fundament, but these guys are just telling it like it is.

Their take on it seems pretty cuddly to me. Am I missing the malice?

Plainly this is a website that hasn’t been updated for years, and in a small high street practice where budgets for glitzy advertising will be a complete irrelevance. As happens increasingly frequently RoF’s piece is badly-written and ill-conceived. Not a lot of positive in what RoF contributes to the legal world these days, is there?

I don't agree with the main critical thrust of the comments above and have to admit that this article made me laugh out loud.

I don't think that the tone is anything more than gently mocking and I'm not sure that having a twee, rather out of date website knocked up on a shoestring is any worse reason to poke fun than any of the other Bonkers Law Firm websites featured over the years.

It's a gentle piece but the "Bonkers" tag is not particularly appropriate.

One of my good friends left a large City firm as a relatively junior lawyer and moved from commercial real estate to residential sales and shop leases. He was very capable; he just wanted something else in life (plus he had invested well in property so he bought quite a nice house). His website profile (and indeed his firm's entire website) is pretty similar to the above.

I think it's lovely and a refreshing change to the impenetrable corporate sites we're all familiar where every lawyer is supposedly brilliant and seemingly doesn't have a live outside work. Isn't it great that we have such variety of lawyers and clients in our field?

Bit rich coming from RoF! Get some perspective, this wouldn’t be appropriate at the best of times but especially not at the moment.

its entire fee structure is on the website too

I like the look of this firm. Small, local firm doing general chamber work in the communities in which the partners and employees live in. The firm won’t have £1m PEP but I bet the firm has loyal clients who value its help and who don’t need all singing and dancing web sites peddling all sorts of useless information or marketing splurge which it’s clients don’t need. The web site isn’t bonkers (like the usual candidates on ROF); it’s just nice, decent and fit for purposes of its clients.

Rof will receive a fax of objections from the firm if it’s not careful.

(I thought the story was very mild btw. How can people object to this? Some of this lot must be fun at parties)