Skip to main content
Macfarlanes partner publishes amusing book
A tip of the hat this week to Geoff Steward, a litigation partner at Macfarlanes, who wrote a book on his sabbatical.

This in itself is hardly unusual. RoF gets contacted pretty much every week by agents representing lawyers who have used their copywriting skills to more useful effect than drafting version 26 of a sideletter. But not many of them are partners at City firms, fewer manage to get their books published by Biteback publishing (most famous for inflicting Lord Ashcroft’s pig fuckery fest “Call Me Dave” on an undeserving public) and fewer still send in a friendly and self-deprecating email explaining it:

"As someone with whom I have worked over the years, I hope you don't mind me troubling you with an announcement about a book I have written which may (or may not) be of interest to you.  I should stress from the outset that it is not about the law; nor is it self-published!

Last summer I took a three month sabbatical.  The word "sabbatical" originates from the Hebrew "Shabbat" meaning literally "a ceasing".  Its modern day meaning is "an extended absence in the career of an individual in order to achieve something".  Wikipedia goes a bit further and instructs that a true sabbatical taker should write a book or travel extensively.  Not wanting to disappoint Wikipedia, I decided to do both.

To my surprise, I found a publisher who wanted to publish the book and the above link gives you more detail.  The book is released on 15th August and is available now for pre-order from Biteback or on amazon.  I am told that it will be in Waterstones as well.  It is being released in the US in April 2018 [and] has been described by The Telegraph as "light-hearted and very, very funny".

...For the avoidance of doubt, I haven't given up the day job." 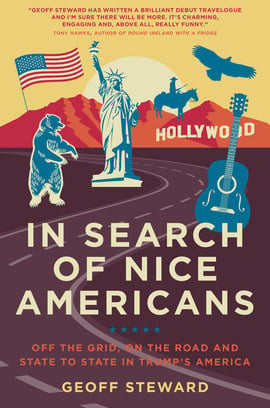 This morning a preview copy arrived in the post at RoF Towers, accompanied by a hand written note from Charlie Martin, the firm’s Senior Partner, saying that he knows we will love it. So all in all there’s probably enough cause to give it a bit of puff and say that you can buy your copy here:

We haven't had an opportunity to read In Search of Nice Americans yet, but according to the blurb, "With his blend of waspish wit and mischievous charm, Steward seeks out normal Americans, such as Joe le Taxi, the former NYPD officer who was one of the first on the scene at the Twin Towers; Pam and Bob, a paranoid psychiatrist and a failed actor who once saw the back of Meryl Streep’s head; and Sheriff Duke of Calhoun County, South Carolina, who reintroduces Steward to the long (and armed) arm of the law". All "without his trusty PA and life support, the unflappable Charmaine, for whom contentment lies in Jesus Christ and custard creams".