A pioneering paralegal has hit upon a novel plan to secure a training contract: do nothing.

The lawyer, who completed his GDL at BPP University and his LPC at ULaw, informed followers on LinkedIn, "Soon My Peers Shall Respect Me As One Of Their Own". Assessing that "Partner Does Not Look So Distant Now", he said he was "Off To Change My Philosophy", before promising "I Shall Return".

Three weeks later he returned from the mountain top to share his vision. "I am no longer applying for training contracts", he posted. "I will wait patiently for a top 25 UK & International Firm To invite this wise man to train with their organisation".

He promised readers they would soon meet him at a hearing or trial.

"It is in that moment you will realise you are connected to the future Prime Minister of England." 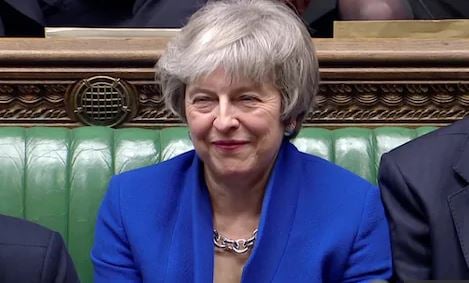 The enterprising lawyer, who also runs a clothing company with the core values of "Being Unique and Fierce", has previously parabeagled at Hackney Council and high street firms. His approach is certainly unconventional, but his frustration is understandable. Securing a training contract has never been tougher. Nevertheless, his  approach isn't recommended to the average candidate, since most firms tend to require at least an application. 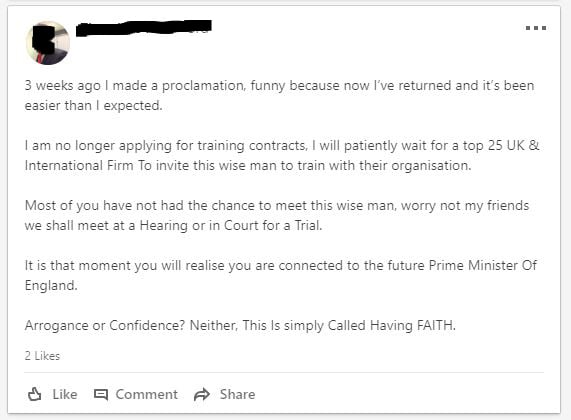 RollOnFriday asked him if any firms had taken him up on his offer to them to make him an offer, but he did not respond. He has remained quiet on LinkedIn, the playground for lawyers who refuse to be boxed in, only breaking his silence to post the gnomic query, "Why are Noses Missing from so Many Egyptian Statues?"

The best trainee solicitors are patient, hard-working and recognise how much there is to learn. They treat colleagues and support staff respectfully and receive the same respect from everyone else. They are a joy to manage.

This guy sounds like an absolute nightmare; arrogant and likely to antagonise everyone around him.

I know it's harder than ever to get a training contract. Good luck but there is sadly no substitute for working hard and plugging away with applications.

Why are you wishing him good luck? As you suggest, he sounds arrogant and is just being lazy. Terrible qualities.

There's no such thing as the "Prime Minister of England".

It's easy to lose your mind under weight of student debt and hopelessness.

More like inappropriate overuse of capital letters, which is usually directly correlated with being an Utter LOON.

People who choose to capitalise every word make me nervous.

Why ARE Noses missing from so Many Egyptian Statues???? 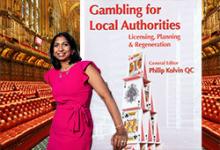 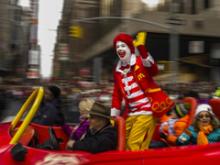 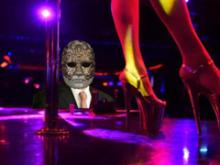