Skip to main content
Revealed: your colleagues make you stay at your firm

Wonderful colleagues form the strongest bond between a lawyer and their firm, according to over 3,000 of them responding to the RollOnFriday Firm of the Year 2019 survey.

Asked to state what made them stay at their firm, 27% said it was all about the people.

'People' was a durable factor, appearing in responses from lawyers at firms judged excellent across the board ("Hands down a genuinely lovely bunch through all the ranks", said a solicitor at high-performing Burges Salmon), but also at firms whose lawyers otherwise deemed them crap. It was "only Dunkirk spirit with other juniors, forged for survival purposes", that kept a DAC Beachcroft lawyer in her job. "By any other metric I would be out the door", said a Charles Russell Speechlys lawyer. 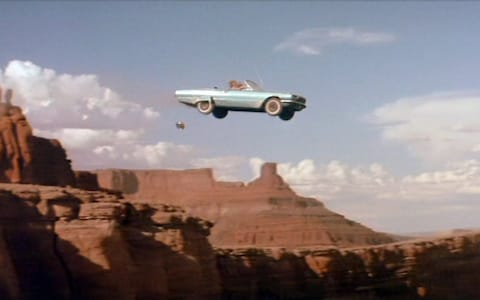 14% voted for culture, the third most-cited reason for lawyers staying at their firms. "No one is going to love their job day in, day out", said an Osborne Clarke lawyer, "but this place really has a special culture that keeps me happy and more relaxed when things get tough".

In shock news, some lawyers actually liked practising law. High quality work was the key factor for 16% of respondents. It featured a lot in replies from Magic Circle lawyers. Asked what kept them there, a Clifford Chance solicitor responded, "Top class work. It's awesome". Though he warned, "I have drunk too much kool aid." "The work we get here is genuinely excellent", said a Linklaters lawyer. "Extremely bright colleagues and the top quality work", said a lawyer at Slaughter and May. "I'm never bored".

But good work played across the market. It was "varied and interesting" at DLA Piper, "enormously enjoyable at times" at PwC, "top end" at Weil and "great quality" at TLT. "Anywhere else would be a step down in terms of client base", said a Clyde & Co lawyer. Even Irwin Mitchell's work kept at least one lawyer IMpressed. "Best firm out there for asbestos related disease claimant work", she noted. Almost every respondent from Herbert Smith Freehills mentioned the superb work they received.

8% of lawyers said they stayed because of a good work/life balance. That figure rose to 11% at national and regional firms, and was usually cited in combination with other factors to describe an overall good deal. "Super high quality work, great pay + a manageable work/life balance", is how an Osborne Clarke lawyer put it. "What more could you want?!" 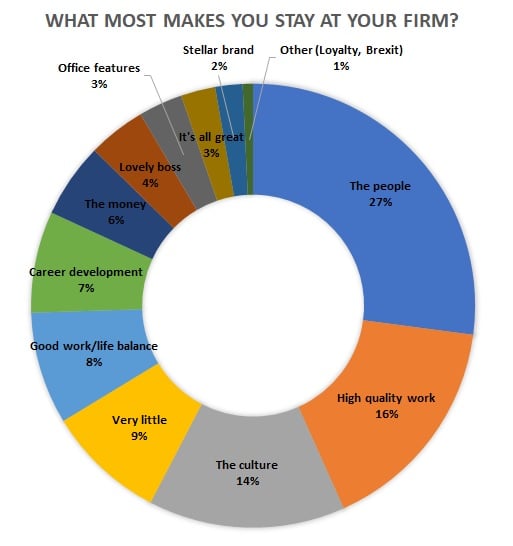 Flexible working cropped up a lot. It was a balm for one Irwin Mitchell lawyer, where relaxing the policy on home working "has made the conditions a little more bearable". (Although she was concerned things had gone too far, as "at the same time the dress code was also relaxed and I find this sloppy - would prefer a mid-line, ie open-necked shirts and slacks").

Fewer than 2% of respondents at US and Magic Circle firms flagged work/life balance as a factor, but their 24/7 beastings served as a useful compare-and-contrast exercise for a few lawyers at other City firms. "The pay is pretty good for how much I have to work", said a Hogan Lovells lawyer; "I keep getting messages from recruiters talking about high-paying roles at American firms but I'd rather eat my own leg".

For almost as many, a firm's onus on career development was the key factor keeping them in their seat. "The opportunities for development are genuinely outstanding", said a lawyer at Macfarlanes. "I made partner", said a White & Case lawyer, "and the firm put huge resources behind me in terms of a quality overseas secondment and support and mentorship". Others were delighted with their development, but nonetheless had their eye on the clock. A senior solicitor commended management at Eversheds Sutherland for having "to date kept to their word in promoting me", but, "If they don't make me up as a partner next year I'm off". Firms with partners who took their pastoral role seriously were appreciated. At CMS, "There are a number of partners I really enjoy working with", said a solicitor, whom "I feel are supporting my career and my progression".

Only 6% of respondents said money was the key factor keeping them in their role. That didn’t mean 94% didn't care about cash, but rather that it wasn't sufficiently huge to be the main draw. The 6% largely comprised lawyers at US firms. 28% of them named the money as the main reason they stayed - more than voted for the work, career development or their colleagues.

For 4%, lovely bosses made the difference. "My fave partner", was the main reason a Simmons & Simmons lawyer was staying. For some, it shaded into a sense of duty. "Loyalty to a particular partner" was keeping one HFW solicitor in situ. 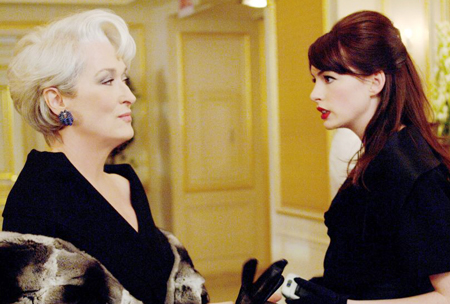 They've got you right where they want you.

Features of the office, like its location or perks, were the thing for 3%, while Brexit terrified a handful of lawyers into stasis. "The fear of a cataclysmic crash post-Brexit", said a Taylor Wessing lawyer, "and becoming the victim of a 'last one in, first one out' policy at a new firm as a result".

Alas, very little was keeping almost 9% of lawyers in their firms. "No-one else would have me", said a Trowers & Hamlins lawyer. "Convenience, laziness and pure hatred of writing CVs", said a Clifford Chance lawyer. "Not wanting to make it look like an horrendous mistake on my CV", said a solicitor at DLA Piper, prophesying "8 more months and I'm out". At least two respondents were staying to create life. "My intended maternity leave!" said one of them, a future mum at Gordon Dadds. One lawyer was staying to live. "Fear of being stabbed in the back/front/genitals as I try to leave", said the scared Slater and Gordon lawyer. Three Shoosmiths staff cited three different wafer-thin reasons for sticking around: "a 2:1 from an non-Russell Group University", "that hot trainee in the next bay, but she's only here until March", and "an alarming tendency to go into the red at the end of each month".

3% of respondents, however, said absolutely everything was great. Like the Hill Dickinson lawyer who concluded, "I would rather die than leave".

That Shoosmiths one with the hot trainee...which office?

With its blame culture, I can see why BLM hasn't made it into this article. Discriminatory practices are arife with postage value bonuses for secretaries and not much more for female lawyers, unless of course you've been a bother and had a baby in which case you bearly deserve an income. Nice big bonuses for the men though. They are the main bread winners after all ?