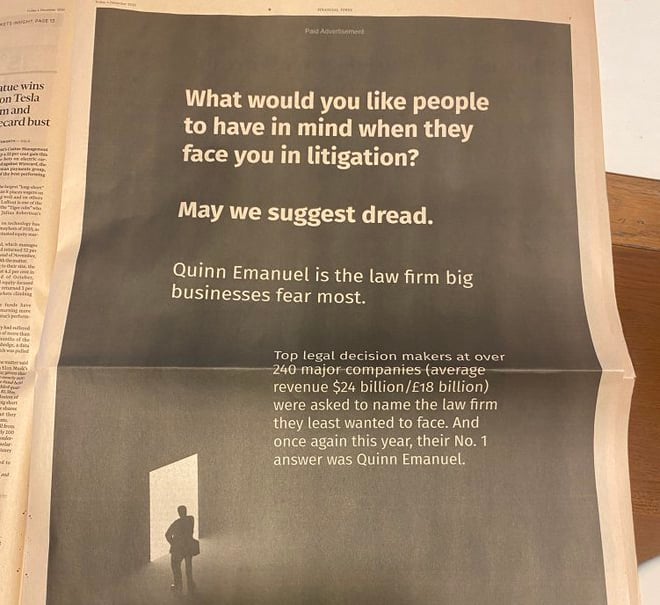 Quinn Emmanuel has unveiled an advertising campaign which promises to fill its clients' opposition with "dread".

The US firm's full page advert in the Financial Times posed the question, "What would you like people to have in mind when they face you in litigation?"

"May we suggest dread?"

Quoting a survey of in-house lawyers which found it was the firm they least wanted to face, Quinn claimed it was "the law firm big businesses fear most". The assertion was, like the rest of the advert, mocked online.

Law profs: are we trying to train lawyers who counterparties “dread”? pic.twitter.com/2HKrdA74dJ

Lawyers on Twitter largely professed to believe that a good litigator did not inspire dread.

“'Dread' isn’t, or shouldn’t be, an aspiration", wrote Tom Herbert, a barrister at Ropewalk Chambers. "Generally speaking I dread being against certain opponents not because they’re good, but because they’re unnecessarily aggressive", or "take points indiscriminately".

"As former in house counsel I hate this ad", added a Massachusetts lawyer. "Why? Because I know they’ll engage in unnecessarily aggressive tactics to bring the dread, ratchet up the animosity between the parties prolonging the matter, and I’ll dread their monthly invoices".

“I am the Dread Litigator Roberts! There will be no stipulations!”, declared Fran Curran, a New York lawyer.

But the ad had its defenders, who argued that dread wasn't such a bad feeling to evoke in the other side. "Try reading it from a client's perspective. I think it's brilliant", said one.

"On the one hand, this is obviously dishonorable and unbecoming of the profession", wrote Professor of Ethics and Law Christian Moriarty. "On the other, it's stuff people have said, just in private, for as long as the profession has been around".

And in Quinn's defence, its marketing did not say it inspired dread because it was aggressive, leaving room for the possibility that everyone hates facing the firm because it is simply spectacular.

Or other reasons. In 2000 Quinn shipped out 600 fake hand grenades with its name hanging off the pins to hip Silicon Valley businesses, sparking multiple calls to the bomb squad. The misconceived marketing stunt did lead businesses to fear Quinn, just not in the way it intended.

The firm proved how fierce it really was by declining to comment.

'The firm proved how fierce it really was by declining to comment'.

"May we suggest dread" is a fantastic line.

Dread only takes you so far. I dreaded receiving the correspondence from a litigator at really mediocre firm in Uxbridge. They were so discourteous and unpleasant, but I had the last laugh. The judge spent about half his judgment berating that firm's partner for his lack of professional courtesy and failure to consider the overriding objective, AND he lost, AND he had to explain a chunky adverse costs order to his client.

Had a similar story 09.16. Upstart little firm adjacent to some water somewhere. Needlessly aggressive correspondence which was met by disdain by the judge. Firms are like people - the pudgy little ones are almost always the most angry.

Isn't this just a bit childish?

What a load of stom.

This is probably the ex-Herbies lot at Quinn in London's idea of marketing. All that red meat has made them experts on everything. Including marketing. Evidently.

Heh.  Comments on this are going to be good.  I shall return in a few hours for chuckles.

god, this is so crass

Corny ad from a corny firm

Tom Herbert sums it up perfectly.  The ones I dread facing are the ones that try to make up for what they lack in intellect and ability with volume of points, correspondence and a complete lack of compromise or willingness to be sensible.

I love the fact that there’s an ethics bod called Christian Moriarty.  He might push you off a waterfall, but he’ll confess to his sin and pray for your soul afterwards.

what is it Taleb calls it? skin in the game?

Whenever Quinn pop up on the other side, I'd say my feeling is usually *sigh*. Largely because my next 18 months will be filled with writing lengthy responses to lengthier complaints about every single procedural step along the way. None of which will ever find its way before a judge.

And what is that graphic all about? Is that person meant to be a prospective client of Quinn about to meet their god-like saviour? Or an opponent, destined for a Poe-esque chamber of terror? Maybe a Quinn lawyer, armed with a briefcase full of interim applications and requests for further and better particulars?

In any case, what's clear is that Quinn's idea of big-money litigation is something that's for alpha males whose default stance in the face of difficulty involves pointing at their own crotches.

@Brillers - whose crotches would you prefer them to point at?

They had a similar ad before. It is still hanging in my office and makes me smile every morning.

There are some local defence lawyers who fill me with dread, and not because they're brilliant...Also "dread litigator Roberts"!

What a horrible thing to say for a firm to say about itself. I remember my department head saying with admiration of a team at one the magic circle firms that they come up with clever solutions.  That's the firm clients want to instruct and where people want to work.

'inspiring dread' sounds like code for a strategy of regularly failing to comply with the overriding objective.With a bit of luck this advert will be cited in many successful applications for whopping adverse costs for any unnecessarily aggressive behaviour. It will be so much more difficult for QE to show they are being reasonable, assisting the court etc. Really hope they get a huge kicking down the line if they stick to this approach.

My ovaries are cringing. And I'm a man.

"The longer the note, the more dread."

The more you need to tell everyone how good you are, the less anyone believes you

Lol, I don't doubt they are 'dreaded' by the US companies who were clearly the one's being asked, almost certainly because they are US class action ambulance chasers, no-doubt knocking on your door with their latest shake-down.  It's got very little to do with their quality as litigators.

A partner in my firm caught management with their pants down reverse engineering appraisal records and then using the amended records to justify taking equity from partners who were not in their preferred circle. That partner appointed QE. Prior to getting them on board, there was lots of bravado from management about how the allegations were false etc.  Once QE were onboard, management at the top publicly took the knee and apologised and paid him off with a huge secret pay off. Bits of the story have come out and it’s shocking what they were up to. I think had it not been QE, they might have fought and maybe even got away with it.

I heard about that saga [email protected] although was not aware what law firm was appointed. I thought the firm rolled over and apologised and retracted as the partner involved got hold of a bunch of emails from the firms compliance team which were very damaging for management and implicated them in some fraudulent behaviour around a fake investigation they carried out to try and silence the partner.

I dread encountering any US firm on the other side, because they are generally painfully second-rate at English litigation and use so, so many words to say almost nothing of substance.

Reminds me of a Walkers’ lawyer in Cayman who said that they were going to rip the other side’s face off.  This was a non-contentious fund launch so a deeply weird thing to say.

I'm a litigator who has worked in large law firms and in house at massive companies.  I looked at the QE website a few years back and noted their big balls assertion that "Litigation is a zero sum game"  I immediately discounted them as people I would want to resolve any dispute on my books because every trainee knows that it's not a zero sum game, some things are important to one party and not to the other.  I don't want litigators on my jobs, I want people who can resolve disputes in a way that is beneficial to my employer.  Sometimes that needs weeks in some court or other but mostly it involves negotiation.

I would suggest that the firm orders a few copies of Getting to Yes by Fisher and Ury.

As others have noted "dread" is usually down to nightmare opponents not truly skilled opponents.  When I was in house there were a few firms who you really would worry about if you saw their letterhead on an LBA, QE was not one of them.

Not spotting a lot of dread, or admiration, of QE.