A lawyer has denied accusations that he lied about a flesh-eating spider biting his leg so he could win compensation to buy a house.

Jonathon Hogg, an in-house lawyer at telecommunications company IPC, was on a Qatar Airways flight from Doha to Cape Town when, he said, he felt "a small, sharp pain" in his left leg and saw a spider scampering away across the cabin floor. When his leg started to swell, he thought it was deep vein thrombosis and took some painkillers. But a day later his leg ballooned in size, turned black and was "bursting open" with pus.

Hospital doctors in Cape Town told Hogg that the perpetrator was a brown recluse spider and that he was lucky not to have lost his leg or his life. He was rushed into surgery where a chunk of dead flesh was cut away, leaving it resembling "something from a horror film", said Hogg.

Roll over for the uncensored image. 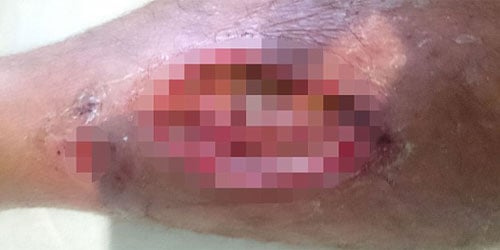 Hogg, a barrister, is suing the airline for allowing spidey onboard. But its legal team claims a mystery witness called 'XD' knows that Hogg is making the whole thing up.

“That person made serious allegations against Mr Hogg in some detail, suggesting that he would appear to have been unwise enough to confide that essentially his case was bogus, and that he was pursuing it because he could not afford to buy a house,” Judge Leslie said at a preliminary hearing last week.

The airline argues that Hogg was actually bitten before he boarded the plane. But it has not revealed who its informant is. Hogg has denied the accusation, and the judge has told Qatar Airlines that it must produce its mystery witness if it expects to be able to rely on their evidence. If Hogg was “found to be a fraudster”, he said, it would have serious implications for his career and finances. As well as provide more anti-spidey ammunition to J Jonah Jameson, he might have added (but did not).

Qatar Airways did not respond to a request for comment.