At least four Clyde & Co partners have resigned in protest at the suspension and resignation of a fellow partner.

In July the firm suspended Ed Mills-Webb, a partner who was enjoying a meteoric rise in the firm's shipping team and who is understood to have been one of its biggest billers. He and an associate were suspected of potentially breaching accounting rules.

This week Mills-Webb resigned with immediate effect as the internal investigation drew to a close. But at least four other shipping partners, including prominent figures within Clyde & Co and the tightly-knit shipping law market, suddenly resigned as well. Andrew Preston (who joined Clydes in 1994 and trained Mills-Webb), Elizabeth Turnbull (co-chair of the firm’s Latin American strategy committee), and Fanos Theophani and Rob Collins all announced that they would be leaving to set up a new boutique firm with Mills-Webb called Preston Turnbull.

Collins told Legal Business, "It will be a marine trade, commercial litigation boutique firm and a lot of detail is still up in the air as far as that’s concerned."

One of the pesky airborne details is the Solicitors Regulation Authority's current interest in Mills-Webb. Clyde & Co reported him to the SRA for the same reasons it suspended him. His partners at Preston Turnbull will be expecting the SRA to conclude that there was no wrongdoing and drop its investigation. They resigned from Clyde & Co in a show of solidarity with Mills-Webb, multiple sources said, because they believed the firm had treated him poorly. A source close to Clyde & Co management said the firm did not believe its former star partner had been mistreated. 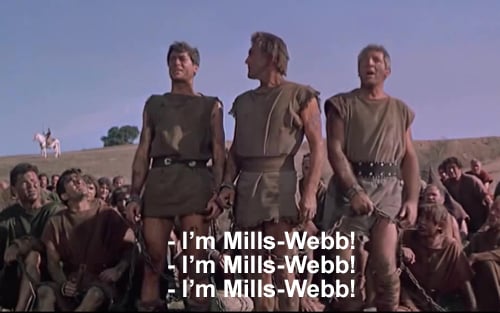 Neither Mills-Webb, Preston or Turnbull responded to repeated requests for comment.

A spokesman for Clyde & Co said, “Earlier this year we suspended two solicitors and referred them to the Solicitors Regulatory Authority of England & Wales in relation to matters concerning the application of the SRA Code of Conduct 2011 and the SRA Accounts Rules 2011. We continue to assist the SRA fully with their investigations. It would not be appropriate to comment further at this stage." The associate remains suspended, RollOnFriday understands, and Clyde & Co's investigation into them is ongoing.

The spokesman added, "We can confirm that Ed Mills-Webb, previously a partner at the firm, has resigned with immediate effect".

Perhaps an honourable move by the partners to show support for Ed.... but what will happen if the SRA come down heavily on him? That won't be such a great look for a small boutique just setting up. And will those partners still be happy to carry Ed then?

What about the associate who is still subject to the investigation? Will the splinter firm offer them a position?

Nice to see some lawyers with morals! Best of luck to Preston Turnbull

That is an impressive show of solidarity and sounds like it took an accumulation of events to reach this point. This has a similar ring to the mass exodus from BLM over the last few years. You can only tolerate, or even witness, bullying and harassment for so long before it's time to make a stand.

Seems odd that the two groups leaving are not going to competitors but setting up themselves.

Anonymous @13:58 By "honourable" I think you mean "foolhardy"

Anon @15:27 Hmmm this doesn't seem to be a story about bullying, but about a firm giving a partner the boot after they've had to report him to the SRA

doubt it is anything to do with solidarity and more to do with timing.  They are setting a up new firm, that doesn't happen overnight.  Plan has probably been in works for a while.

If the associate who is still being investigated is kicked out of Clyde and isn't offered a position by the defecting partners, then that would seem to really stink. It would be a show of solidarity for the partner Mills Web, but another rule for the poor associate.

anon 16.52: I'm a Clydes lawyer - the investigation into Ed has been going on for long enough for the departing lawyers to plan this - so it's not just an overnight decision. Preston and others were waiting to see what happened to Ed before making the move. That's why it's all been announced at the same time as Ed resigns.

Looks like a suicide pact to me.... why tie yourself to someone at risk of SRA sanction?

LOL at the Spartacus pic

Well done Andy and chums for sticking two fingers up to Clydes for the way they've treated Ed. Principles are important and I applaud you.

In shipping terms, the boutique is like a dinghy, and a negative SRA ruling could be like dropping a leadweight from a height into that dinghy

If Ed gets struck off then the show of solidarity is going to be more like a kiss of death for the breakaway firm.

A colleague told me that Clydes lawyers refer to a previous breakaway firm as "Clydes Light". So to distinguish it, perhaps this new boutique should be called "Diet Clydes"?

Somewhat unconscionable of Ed to allow partners and others to throw their careers away when he might (I.e. certainly will) get struck off.

Take it from somebody who used to work there - Clydes always seemed like a super aggressive place where people could quickly flip from being flavour of the month to persona non grata. A place where sociopaths could feel at home... until the tables are turned on them.

If Ed (and any of the Preston Turnbull group) think that Ed has been treated poorly by Clydes, then they should reflect on the saying "live by the sword, die by the sword"

If there was any suspicion of money laundering then surely suspending Mills-Webb pending investigation was perfectly reasonable. Especially given that Clydes have had their fingers burnt in the past. Hardly seems like a case of bullying/harassment.

Last two Senior Partners resign before the end of their first term. CEO resigns when his candidate is defeated. Record SRA fines. Serious matters hushed up. And what is the 'colours system'?

I wonder if Preston Turnbull is trying to poach Clyde associates to work for them. ROF could ask .......

@Anon 10:50: ROF could also ask PT if they'll take the associate suspended when working for Ed, or if that associate has been hung out to dry

Still no one comments on what the notorious 'colours system' is? Partners will know. It is the entire basis of Clyde's success and informs the culture of the place from the very top to the very bottom.

It would appear that the departing partners had been suffering a series of conflicts of interest over the years as Clydes are mainly a cargo insurance firm and they sold themselves as something else/more. Plans to depart were afoot before the Mills Webb scandal exploded and those were discovered by the firm which precipitated the departure. Not really a case for blind loyalty...

Update ….. I see that Ed has now resigned as a partner at Preston Turnbull    https://beta.companieshouse.gov.uk/officers/TLf2x_R9827-uv9P9SYdmE8RyF4/appointments

EXCLUSIVE Clyde & Co in outstanding typo of the week