Henry Hendron has vowed to appeal a three month suspension for failing to pay back a complainant her money, although the barrister has already fallen out in dramatic fashion with a second client.

Yvonne Hobbs complained that, due to his personal difficulties in 2015, Hendron was unable to represent her. Hendron was obliged to refund her £650, but his cheque bounced. The Legal Ombudsman told him to repay the amount plus £200 compensation, but he missed its deadline by ten months, then sent another cheque which also bounced. Hendron claimed that by her "wilful conduct" in cashing his final cheque three months after he sent it, Hobbs had waived her right to payment.

Hendron will appeal the BSB's decision, he told RollOnFriday. "I am therefore still a practising barrister and will remain so until the High Court has determined my appeal", he said. 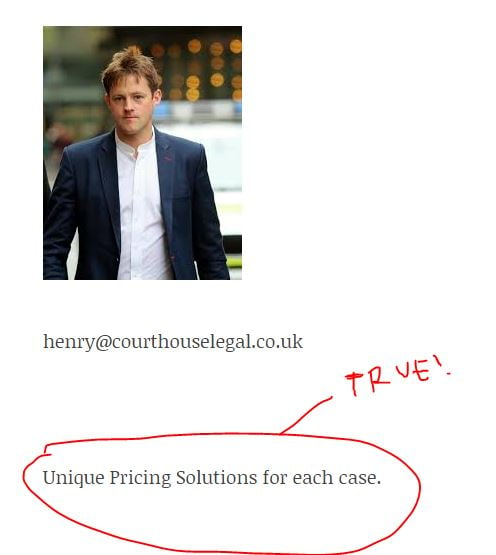 Owning it: amazingly, Hendron's website appears to feature a paparazzi shot of the barrister attending his own trial at the Old Bailey.

However, another client has approached RollOnFriday with a similar complaint. Soon after Hendron's return to practice, 'Ron', who asked not to be identified, instructed Hendron in relation to defending injunction proceedings brought by Lewisham council.

Ron said he became concerned about Hendron after the barrister sent him multiple emails asking him for details about his case in the early hours of the morning of the injunction hearing. After googling Hendron, Ron demanded a refund of the £9,999 fee he paid upfront, and when it wasn’t forthcoming, he reported Hendron to various regulators.

For his part, Hendron reported Ron to the police.  “[Ron] made repeated calls to both my private office (my PA) and my clerks where he was aggressive, abusive and threatening, and repeatedly called my staff and clerks 'fucking cunts'”, Hendron told RollOnFriday.

“To abuse or attack a lawyers staff, clerks, or colleagues is akin to an attack on the administration of justice, and I for one will not tolerate it”, said the barrister. He also accused Ron of having "unlawfully attempted to extort money from me in what was nothing other than a cheap and pathetic attempt at blackmail".

On Tuesday, three days after his latest suspension, Hendron agreed to refund Ron and sent £9,999 to a firm which had been acting for his angry ex-client. Although, in a bizarre inversion of his issue paying Hobbs, the firm told Hendron that it had to return the money to him because Ron had just de-instructed it. Hendron is refusing to take it back, fearing another Hobbs situation with the BSB. "I will not bank any cheque that you might send", he wrote to the firm, "as I consider that the problem is now yours not mine".

It's been an eventful few weeks for Hendron. In July a judge recused himself from a trial involving the barrister after the opposing solicitor sent his clerk a link to a RollOnFriday story about the lawyer's travails.

Love reading stories about him.

The reporting of this poor chap's travails is quite unsettling.  He made a mistake and paid the price.  Let him now get on with his life and allow him the anonymity the rest of us enjoy.  I can't imagine this does anything positive for his mental health.

Newsworthy but it makes for sad reading. The impression I’m left with is that he’s struggling and none of us should derive any pleasure from that. Shouldn’t the BSB be looking at his fitness to practise in a more pastoral sense?

I don’t have any sympathy. He is clearly unfit to be a barrister and should be struck off.

He is not a “poor chap”. Having met him, he is thoroughly unpleasant.

Pass the man a shovel

The SRA would have struck him off years ago. What is the BSB waiting for?

It's the Bar *Standards* Board, not the Bar Wellbeing Board. It's not there to be "pastoral", but to protect the public by enforcing certain standards in the profession.

To be clear: you may be right that he needs compassion and help, and if he does, I hope he gets it. Wellbeing at the Bar is a big issue. There are bodies dedicated to it.

To the above poster, yes he made a mistake and let him move on etc.... True, but it seems he can't stop making more mistakes. Added to that he is using a photo of himself attending his own trial. Bit weird.

I thought this was all very harsh on the guy, then I read the original article and saw this:

"As a 17-year old, Hendron spoke at the 1998 Conservative Party conference calling for the reintroduction of the death penalty."

Per anonymous 2 Aug at 16:00, I would add that while he is unfit to be a barrister, he would make an ideal Tory MP on account of his sexual, financial and drugs-related recklessness. All that is forgiven in the eyes of the decrepit dinosaurs who form the bulk of the Tory party membership on account of his bring back hanging stance.

Why is anyone surprised?

Most barristers would behave in exactly the same way as Hendron because there is simply no sanction or recourse for the client.

All barristers know this, and most of them would do the same because they know they can get away with it.