A solicitor derailed a trial, landed his firm with a six figure costs order, caused a judge to recuse himself, “perverted the course of justice” and has been reported to the Solicitors Regulation Authority. All by sending a court clerk a link to a RollOnFriday story.

The dangers of reading RollOnFriday are manifold and well-known, such as inciting the envy of colleagues without an internet connection. But a lawyer from Rexton Law has shown that it can also be used to attempt to tip the scales of justice.

In a surprise announcement at the Royal Courts of Justice last week, His Honour Judge Gerald announced that he was recusing himself from a long-running property fraud case. “Most of what I will be referring to revolves around the somewhat irregular communications of the solicitor, Warren Grant”, he said.

The judge explained that last week, Grant suggested in a phone call to the judge’s clerk that she should conduct an internet search on Hendron because, said the judge, "he had apparently been involved in (I quote her quoting him) ‘a cocaine-fuelled sex party’”.

“That is something which is somewhat surprising for a solicitor to inform a judge’s clerk of, and it is difficult to understand what the relevance of it could possibly be”, he said.

Grant followed up by sending an email to the clerk:

“Have a great weekend and take a look on your own computer or phone at www.rollonfriday.com/node/98444”

HHJ Gerald decided to google Hendron. “For reasons which I cannot now recall, my attention was drawn to two things on the internet”, one of which “stated that Mr Hendron had been suspended from practice owing to some criminal matters which were, from recollection, to do with some sort of cocaine at some sort of party”.

“What I have not done and did not do is follow the RollOnFriday link: I have no idea what that is”, he claimed, in what is now RollOnFriday’s best testimonial and mandatory staff tattoo. 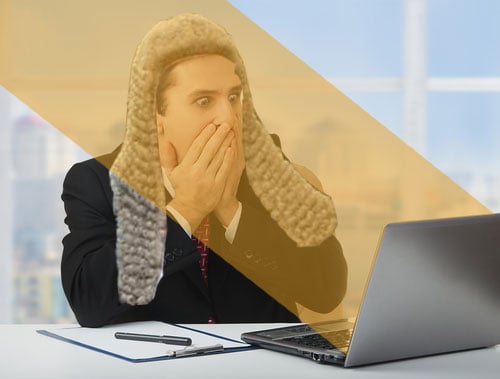 HHJ Gerald informed Hendron about Grant’s invitation to check out the (wonderfully written) article. He asked Hendron’s client to decide whether he should recuse himself because of it. She decided he should, “not on the basis of actual bias, but on the basis of apparent bias”, said the judge.

Grant's “improper and extraordinary” emails were "calculated to undermine the standing, reliability and integrity of [Hendron] in the eyes of the court“, he said, and "a clear attempt to influence the judge”. He concluded that, in his view, they represented “an attempt to pervert the course of justice”.

Rexton Law did not respond to requests for comment.

The financial consequences of the trial’s delay caused by Grant’s conduct were “extremely serious”, said the judge. Rexton Law has now been ordered to pay wasted costs amounting to over £150,000. Meanwhile, Grant is understood to have been reported to the SRA.

Most importantly, though, His Honour now knows about RollOnFriday. You were doing God's work, Warren.

"I have no idea what that is."

HH James Pickles: "Who are the Beatles?"

I thought judges were supposed to be able to put things like this out of their minds.

Not a good few years for Mr Grant:

This story is remarkable from start to finish, but I think this is the best sentence I have ever read...

A quick search of the solicitor' name suggests those in glass houses etc.

There's something very odd here. The information about Henry Hendron is in the public domain, has been for some time. The judge could have stumbled across it at any time. Indeed, it is slightly surprising that he had not already become aware of the story.

If judges are required to recuse themselves simply by becoming aware of Hendron's past, that basically means he'll never work again, all for something the judge concluded had no relevance to the matters he had to decide.

I wonder why Grant thought it would go well to contact a judge or judge' s clerk with "dirt" on the other side's barrister?

We need much more emphasis at law school and in training contracts on professional conduct issues.

I smell a fish

It's not the fact he has become aware of the story per se that's the issue, it's the manner in which he did, i.e. the fact that he has clearly been the subject of a deliberate attempt by the other side to develop a bias against the defendant's counsel. You're just walking straight into an appeal if he found for the claimant and that then came to light (whether or not it had any relevance) so seems a sensible decision.

Are chemsex parties open to all comers?

The point is mud can stick if enough is thrown.