The Court of Appeal has overturned a judge's decision to hand down a six-month prison sentence to a paralegal for a minor paperwork error.

Nasrullah Mursalin was a paralegal at Gull Law Chambers and worked for a client who had cases being heard at both the family court and an immigration tribunal. Mursalin made the error of including documents for the family matter in a bundle that was sent to the judge presiding over the immigration case.

Rather than being on the receiving end of a gentle slap of the wrists, Mursalin was hauled before the family court for his slip-up. Judge Moradifar noted that the paralegal had made a genuine error, and observed that he was not legally qualified and had been working under the direct supervision of a partner at the firm.

Despite these extremely valid points, the judge went on to admonish Mursalin that a breach of disclosure rules "cannot be taken lightly", particularly for the protection of parties in the family court. He concluded that the gravity of the mistake required a custodial sentence, and sentenced Mursalin to a six-month suspended prison term. 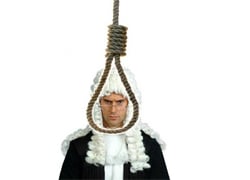 Mursalin appealed. At the Court of Appeal hearing his barrister, Neil Mercer, said that the only people who had seen the family court documents were another judge and a Home Office official. Mercer also argued that the correct procedure had not been followed by Judge Moradifar. Mursalin was not told that he faced contempt proceedings, he said, nor were the allegations of contempt particularised.

Mercer also said the excessively strict judge had taken a "cavalier approach", with no consideration given to the concept of a fair trial.

The Court of Appeal overturned the conviction and sentencing of Mursalin, agreeing that the original ruling contained several errors and was not fair or transparent.

Moradifar joins the pantheon of judges to get a ticking off from a higher court. Others have bullied, dozed off, or neglected to mention a close friendship with a witness.

Perhaps Maradifar should be given the suspended sentence as punishment instead? As it is I guess nothing will happen and he will get a gold plated pension when the time comes.

The irony - which may be lost on the learned judge - is that he presumably thought he was upholding the integrity of the Court, when in fact he was bringing it into disrepute.

Literate, good humoured comments - thank you fellow readers of ROF (I might add that it makes a bit of a change from some of the nonsense that gets put down here sometimes). 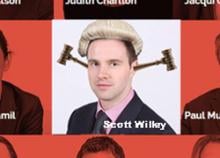