Skip to main content
Sleepy judge picked up for nodding off

A judge has been left red-faced after he was spotted falling asleep twice during a hearing.

In March 2018 Judge Paul Stewart was presiding over an employment claim against the Science Museum Group (which includes The Science Museum in London). Stewart found in favour of the claimant employee.

However, SMG's barrister believed that the decision was unfair, as he had spotted the judge falling asleep twice throughout the hearing. The museum group therefore appealed to The Employment Appeal Tribunal. At the appeal, SMG's barrister Tim Sheppard said that during his cross-examination of the claimant he had noticed that Stewart's hands had slid off the desk. He also noted that the judge's head was slumped and his eyes closed. "He appeared to lose consciousness entirely", said Sheppard, and had "stopped taking a note of the exchange" and "stopped engaging with the documentation in front of him".

The judge awoke, but around thirty minutes fell asleep again. This time Sheppard did everything, short of sounding a klaxon, to try to awaken the judge. The barrister raised his voice, banged his cup on the table and stated "Sir" several times, until the judge "visibly regained consciousness and composure". 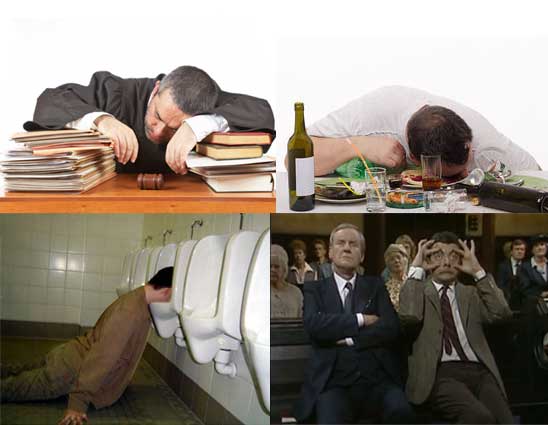 A day in the life of Judge Stewart

Judge Stewart told the appeal hearing that he had no recollection of falling asleep, although conceded "the absence of such a memory does nothing to rebut the allegation".

Judge Auerbach of the appeal tribunal found that Judge Stewart had "very unfortunately" fallen asleep twice and "on each occasion more than just momentarily". He said that there was "a real possibility that the fairness of the trial was affected" and allowed the appeal. The employment claim against SMG will now have be reheard.

We've all been there, in Court: you sit a certain way, the blood to your brain gets cut off or slowed, your eyelids get heavy, and POW. You're out.

This is disgusting.  Shameful.  Really disappointing

In other words, if judges can’t use their daily lunchtime claret allowance properly and responsibly, then it will have to be cut to just one bottle.

Poor judge, a little nap isn't that bad, he can just read the transcript later on to prepare his judgment

I can't say I blame him, Court proceedings are insufferably dull. Besides, he probably read the papers and made his mind beforehand, that's what usually happens.