Skip to main content
Time to laugh at some accountants

It has come to RollOnFriday's attention that cosplayers have infiltrated the accountancy profession and are pushing their vile fetish onto innocent lawyers. 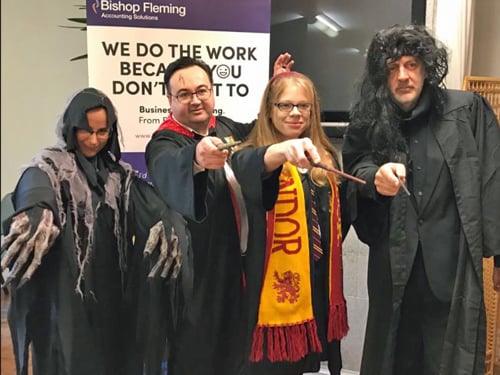 It is not clear why the woman on the left dressed up. It is well known that all accountants are Vibe Dementors.

Next to her IS Harry Potter, if the Sorting Hat told him he wasn't a wizard but he refused to accept it when he was sent back into the normal schooling system. His enthusiastic, fruitless attempts to solve problems with spellwork resulted in humiliation, bullying and isolation, but he persisted and continues to wear the outfit and act all magic. A small town tragedy, his unwavering belief in his mystical nature and grand destiny means he is now picked up by police as a matter of course whenever there is a disappearance in the local area.

On the right is the main event. Jeremy Corbyn dressed as the corpse of Alan Rickman. Tasteless, perhaps, but at least the wig finally makes his hatred of the EU, as well as all living things, explicit. 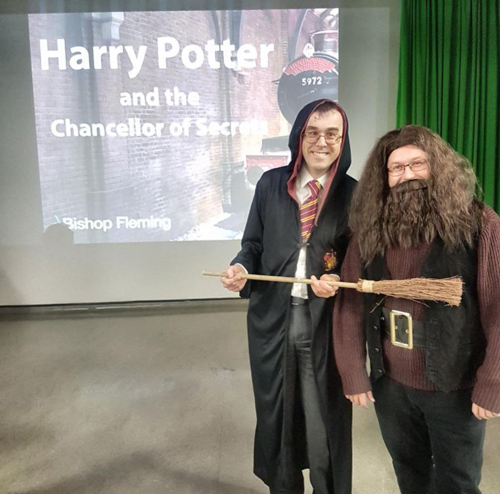 Oh My God they shrunk Hagrid. There's a strong sense here that we've got the POV of someone who was pulled into a van and chloroformed and they've just woken up to their new life in a chamber of really bad secrets. The only way this could be more creepy is if the captors had a powerpoint presentation, which they have. Dominant Potter and Gimprid are going to make Zed's dungeon feel like a game of Quidditch, and that broom is your Voldemort and they will make you speak its name.

Anyway, a ROF spy who attended the function described it as "a budget presentation on many levels".

Apparently they also did a Star Wars one once. Sadly I don't get to attend such events. Wait, I meant "sadly".
77
Vote up!
109
Vote down!
My first thought was "who the fvck are Bishop Fleming"