Skip to main content
Shearman & Sterling's new logo: how it came to be

It is 8.59am at the London office of white shoe law firm Shearman & Sterling.

On the other side of the curtain a throng of legal journalists are waiting to see the firm's new logo for the first time.

Suddenly CHARLES SAATCHI, the marketing guru who fixed up HFW and Dentons and fieldfisher and Herbert Smith Freehills with their new logos, bursts out of a closet. He is strangling a mop and dressed in a KAPPA tracksuit.

BUCKWORTH: Saatchi! Where have you been? I'm supposed to be unveiling Shearman & Sterling's new logo in one minute and I have nothing to show for it!

SAATCHI (wrestling with the mop): Don't fret my boy, I have it under control!

BUCKWORTH: What are you doing?

SAATCHI (tossing the mop away): Her allegations are baseless, false and defamatory and my legal team will be suing.

SAATCHI: I do not recognise her recollection of what I believe were consensual events, however I regret that she felt uncomfortable.

BUCKWORTH: What are your talking about?

SAATCHI: This historic, isolated incident does not reflect who I am now.

Four more mops and a vacuum cleaner topple out of the closet.

SAATCHI: In light of recent events I have decided to step aside from my businesses while I devote myself to becoming part of the solution.

SAATCHI slaps BUCKWORTH across the face.

SAATCHI: Believe their stories! Women are human beings too, I've been informed.

BUCKWORTH: Yes, but those are mops.

SAATCHI: And you can't abuse a mop. Legally. Can you? I'm back in business!

BUCKWORTH: Listen you ingrate, where is our logo?

SAATCHI: Of course. What a great brief. Shearman & Sterling. I took a cut from the former and a lot of the latter.

BUCKWORTH: Yes you were very expensive.

SAATCHI: If I recall correctly, this is your current logo.

SAATCHI: But it is tired.

SAATCHI: And as a storied UK firm you want to hark back to when Britain was great.

SAATCHI: To a time when the country was flying high, when Britpop ruled the airwaves, when the Spice Girls were feminist icons, when Jimmy Savile was beloved and rebelliousness could be measured by the severity of one's undercut. A logo, in short, which recaptures the halcyon days of 1990s Britain!

BUCKWORTH: That is completely wrong. We are a US firm and we want a modern logo that looks forward, not back. So I assume you are joking which, while interesting, is not at all timely or appropriate as I have to step onto that stage in 30 seconds.

SAATCHI: Say, 'aright our kid' - to the new face of Shearman & Sterling!

BUCKWORTH: Tell me you have something else.

SAATCHI: A Parklife fan. Fine. I do. How about something edgy which makes your competitors look stale?

BUCKWORTH: No, I can tell you right now - 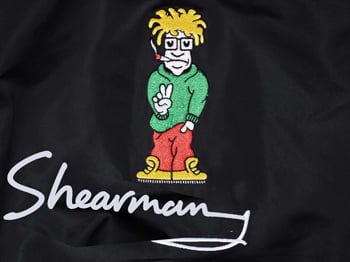 SAATCHI: But the little fella's smoking a naughty cigarette.

BUCKWORTH: Listen you clown, I am not presenting the most ferocious press corp in the world with this abomination. It'll be like tossing red meat to sharks.

SAATCHI: No worries amigo. What about this?

SAATCHI rips open his KAPPA tracksuit, hauls off a Sweater Shop jumper and tears a Global Hypercolour T-shirt in half to reveal a Ben Sherman shirt.

BUCKWORTH: But we're not called that.

SAATCHI unfolds a craft table and unpacks stencils, pens, scissors and an iron. He proceed to frantically cut, glue and steam his shirt while still wearing it.

SAATCHI: But if I just do this, and AAARGH THAT IS HOT this, then work my magic like NYYAHH MY NIPPLE this, then lo and behold by the neck...your new logo!

BUCKWORTH: Oh that really is foul.

SAATCHI: That's what they said to Einstein.

BUCKWORTH: I'm pretty sure they didn't.

SAATCHI: Don't bring looks into this.

BUCKWORTH: It's a rip-off! And a mess! And we're not even spelt like that.

SAATCHI: Not a problem. I'll get rid of the colours, shame, and snip, snippety-snip...say hello to your new logo!

BUCKWORTH: You've just added an 'a'. It's still a rip-off.

SAATCHI: I take your point. One second...Ta da!

The sound of nasal chanting and feeble stamping can be heard from behind the curtain.

BUCKWORTH: But those wolves are growing impatient. You leave me no choice. We'll take it. But I'm not paying for it.

SAATCHI scoops up all the mops and jumps through a closed window, cutting himself badly.

SAATCHI: I have your women! I have all your women! And some of your glass, in my leg! Saatchi wins again!

BUCKWORTH considers his options. Then he pulls on the modified Ben Sherman shirt, takes a deep breath, fixes a smile on his face and steps through the curtain. There is silence. Then cheers. The reception is ecstatic. The Shearman Shearman & Sterling logo will go on to become one of the most successful logos ever conceived probably. Within days Saatchi is replaced with Christopher Plummer.

Had me in stitches, quality writing!