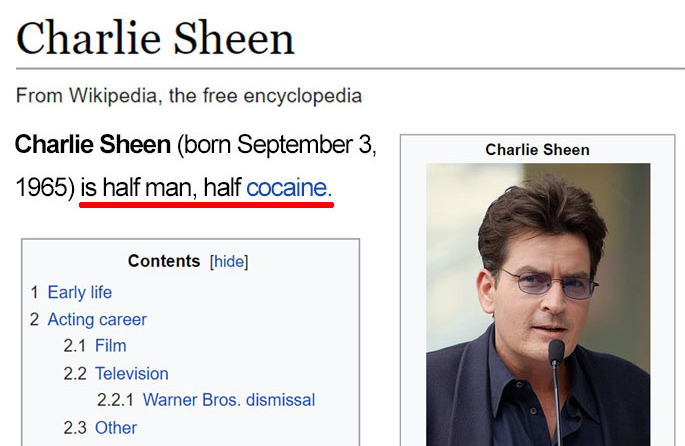 Nothing gets past the Wikipedia moderators

BPP University was warned by Wikipedia for "disruptive editing", and the Law School's PR company was blocked.

In January 2018, Wikipedia warned a user with the name of BPP's head of brand and content, Natalie Procter, not to "remove content or templates" from BPP Law School's Wikipedia page "without giving a valid reason for the removal." The BPP user was told to stop "disruptive editing", and warned if they continued "to blank out or remove portions of page content" they might be blocked.

In October this year, Wikipedia gave another warning to the BPP user, Natalie Procter, to stop disruptive editing and said they may be blocked if they "continue to add promotional and advertising material": 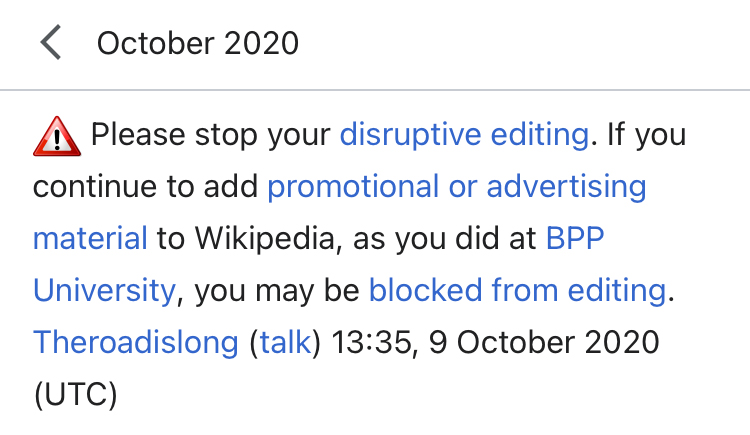 Gerard Kelly & Partners, a PR team working for BPP was also "blocked indefinitely" by Wikipedia when trying to edit BPP's page, for using the account "contrary to the purpose of Wikipedia": 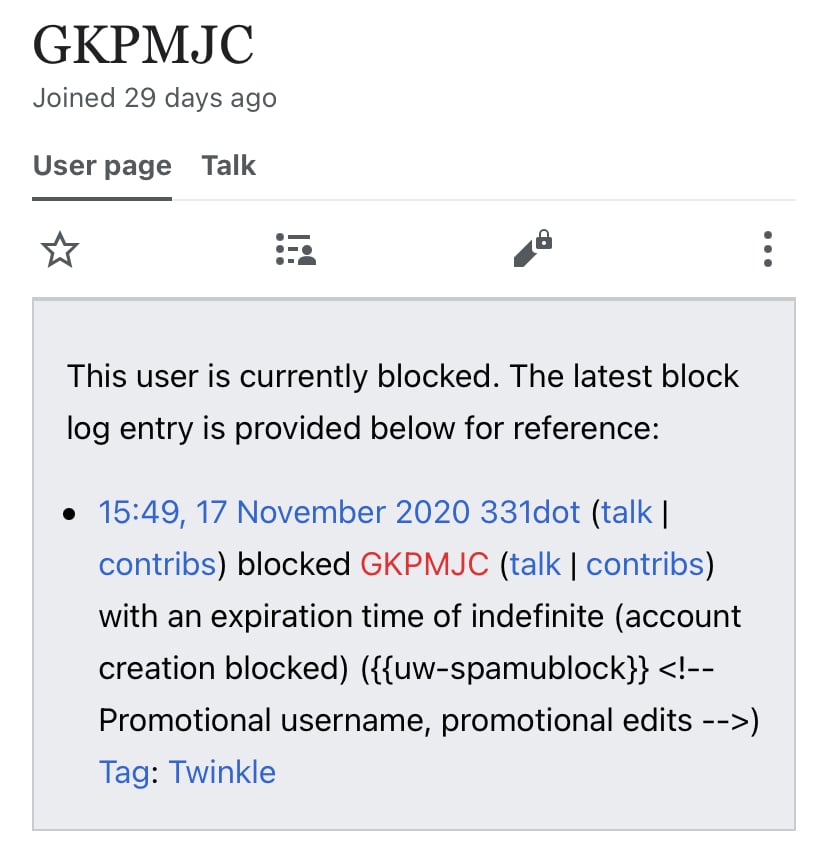 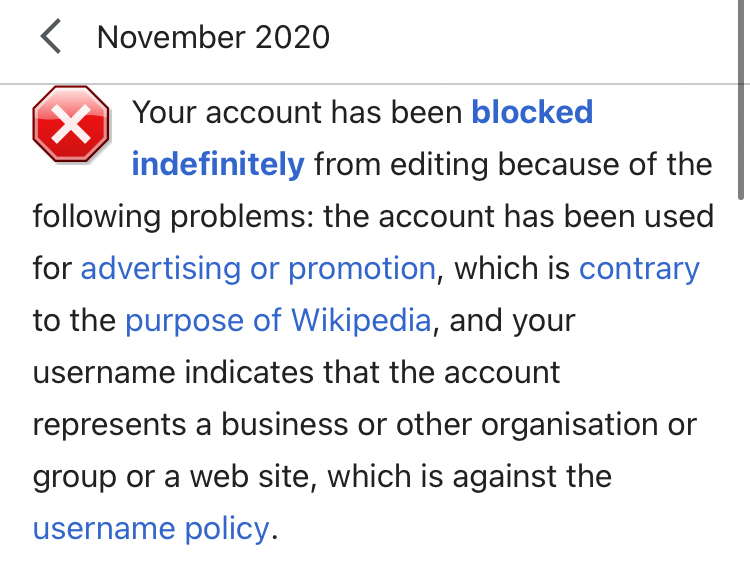 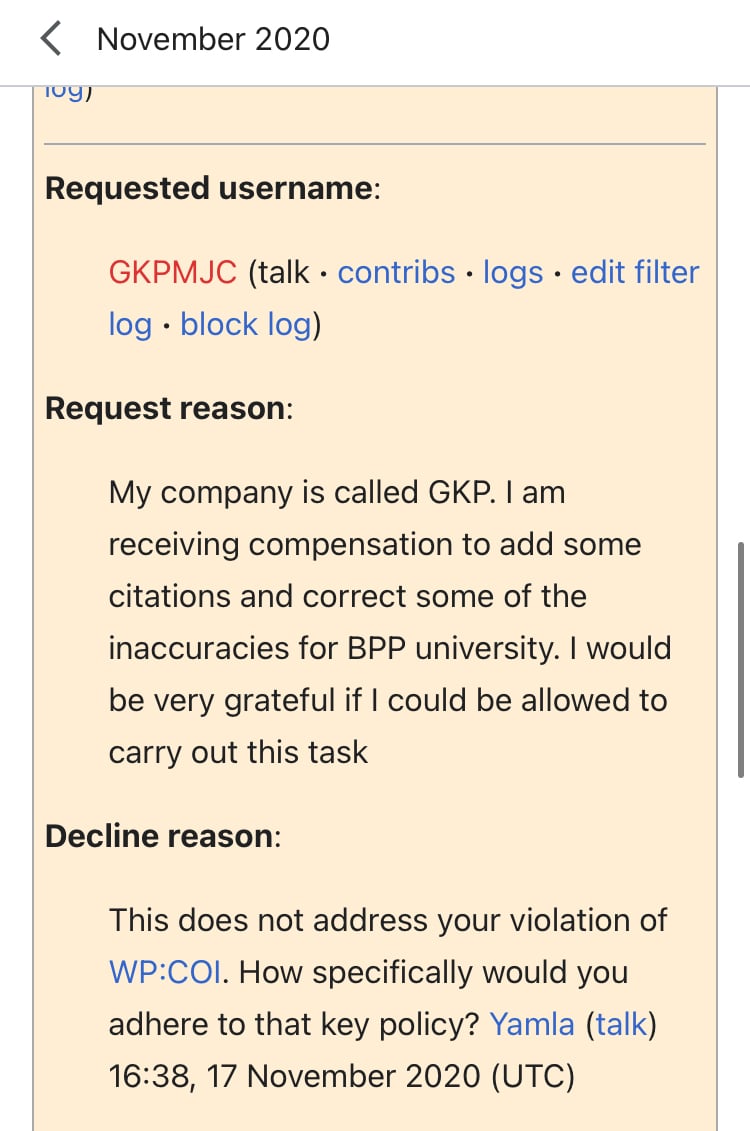 A Gerard Kelly & Partners spokesman told RollOnFriday, that they were given a sanction by Wikipedia which was "since been downgraded."

"We mistakenly attempted to correct some factual inaccuracies without requesting changes through the 'article talk page’," said the GKP spokesman. "In future, and as advised by Wikipedia, we will make the necessary requests and use its edit request template.”

A spokeswoman for BPP said that "as part of a periodic review of BPP University's entry in Wikipedia" it had "added some relevant citation templates" which they considered to be "minor, constructive edits or, as Wikipedia describes, ‘uncontroversial changes’."

"We also felt that some additions to the page from other users were factually incorrect, and these inaccuracies have now been logged with Wikipedia," said the spokeswoman. "We apologise that we did not propose changes on the ‘article discussion/talk page’ and, will ensure we follow Wikipedia's guidance on this in the future.”

BPP is not alone in the legal world in unwittingly drawing attention to themselves when editing a Wikipedia page.

To be fair to BPP, Charlie Sheen actually is half man and half cocaine.

Hardest job in the world.

You're too modest John.

Although I come the Billy big bollocks on rof, I was a lecturer at BPP for 13 years and inflicted far more on their students by way of incompetence than this story does to their reputation.

You should have stuck to the guitar.