A Slater and Gordon director is in trouble for using social media to tell his enemies how much he hopes they contract cancer.

Dane Stanley, the personal injury firm's Marketing Director, reacted with fury to a journalist's observation on Twitter that no-one had died in the fire which ravaged Notre Dame cathedral. Reporter Ewan MacKenna said it was just bricks and mortar.

Stanley certainly felt passionate about it. "You were insincere in your tweetvyou [sp] cunt", he continued, asking MacKenna, "Perhaps you'd be as ambivalent if your house burned down?".

He ended by raving, "If @EwanMackenna got cancer of the eyes...no one died". 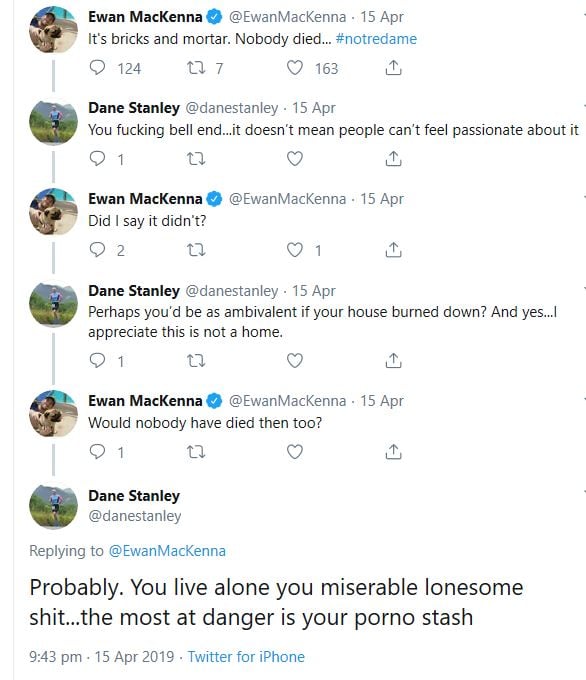 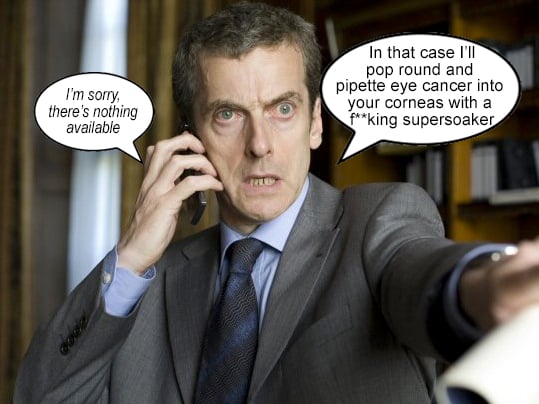 Dane tends to react poorly to a lack of meeting rooms.

Just before joining Slater and Gordon, Stanley wished his signature disease on some vandals. "To the little shit(s) who broke in to my car last night”, he wrote, “I hope you get cancer of the eye balls".

Stanley isn't a fan of all cancers, though. He promoted a petition in 2014 calling on the government to fight blood cancer. Two months later, however, Northern Rail made the mistake of delaying his train.

"Ah @northernrailorg", wrote Stanley, "I have missed you like I would miss cancer of the eyeballs!"

The train operator appeared offended by Stanley’s tone, but he was unrepentant. 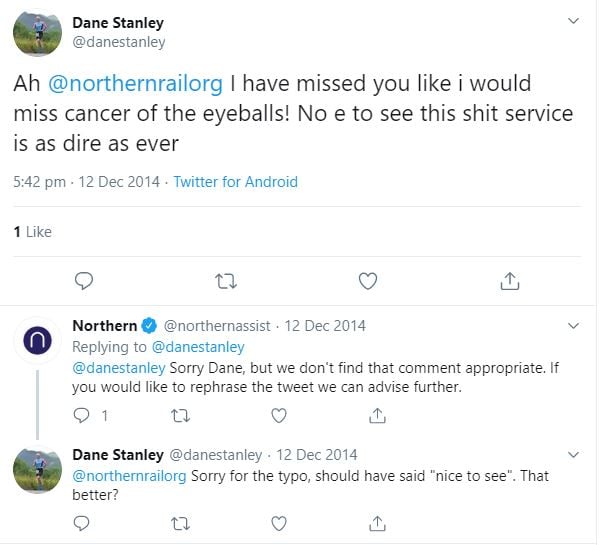 Sadly, running to work proved just as rage-inducing as the railway. "God damn it @GarminUK", fumed Stanley, "your software is a pile of aneurysm inducing dog shit. The person responsible for @garminconnect wants bloody killing".

Stanley did not respond to a request for comment, but if he had it would probably have featured eye cancer and screaming. A spokesman for Slater and Gordon said, "We take any form of offensive language very seriously. This is now an internal matter and we will be dealing with it accordingly."

Bet he's a pleasure to work for.

Why are you looking at five year old tweets from a bloke in marketing?

he comes across as a total twunt

-support staff are a part of law firms too

-he's not 'some bloke', he's the director

-what's your time limit for whether something matters? would it be ok if i murdered someone five years ago?

Thethickofit, the headline post related to the Notre Dame fire, so can't have been five year old tweets. The obvious point of referring to older tweets is to demonstrate that this person has a history of posting vile posts that aren't becoming of someone practising as a solicitor.

So if, for example, he were to try and excuse his Notre Dame posts by saying "gosh, I'm terribly sorry, it was completely out of character, I was going through a terribly stressful time, I would never do something like that again", it would be reasonable to suggest that he was a lying knobscratch.

And he's the *Marketing Director*...

Maybe he could use a good employment lawyer?

That’s another fine mess you got me into Stanley.

FAOD, I am not Dane Stanley

I do think I will tell some people to get cancer of the fooking eyeballs today, kinda feels like a friday insult

So, Mr Stanley, why did you leave your last job?

I thought he was too kind to northern rail

He works at an ambulance chasers - what do you expect?

Pretty good bantz tbh. 7/10. People who are this angry are hilarious.

That's just so specific. I mean, why the eyes?

I wouldn't mess, but what's going on with his hair?

Ayayay: his hair has eyeball cancer.

Oh dear.  Does this mean that his hair wants bloody killing?  That would be unfortunate.

Can’t blame him. I’d be furious too if I worked at Slater and Gordon.

It's 2019 and Earth is being overrun by the snowflake brigade, embarrassing the level of offence some people take. The standard of content on here makes The Sun look like The Wall Street Journal!

Regarding the not a snowflake comment 14.08 if you read the article it shows a nasty vindictive man who obviously has anger issues. He’ll probably be promoted.

Snowflakes outraged, Northern Rail users support, hairdressers amused and lawyers use it as an opportunity to pass comment on S&G.

It’s disgraceful language and it’s good that his employers have said they’re dealing with it. I lost my sister in law to cancer last year and I don’t think anyone should joke about this awful disease or use it to threaten another human being. Shameful. He should do the decent thing and resign!

I’ve been looking for an example to show my kids, how social media can be used for good, can be used to hate, can be used to control, and can be used to simply discredit others in order to take a moral high ground, so oneself can feel more superior because their lives have nothing else to offer. Bravo ?

If someone is going to be hung out to dry for 5 year old tweets I really think Slaters are preparing for the night of broken glass!

This could be the cull of the century

Jog/run on nothing to see here

horrible business... should have closed years ago at least they have scum top to bottom.

Sorry can ROF and half the people on here not read? He did not wish cancer of the eyeballs on the reporter. He was trying to back up his point about Notre Dame fire not killing anyone by querying if it would be ok if said reporter didn't die but only got cancer of the eyeballs? Whether he is an offensive prick or not his tweet clearly neither wishes cancer on anyone nor diminishes cancer's severity.

But hey let's jump up and down anyway and cry offence.

I've got a friend who worked with Dane in the past and he couldn't stop laughing, he said this is exactly the type of person he is, total juiced up [redacted by rof].