Pay gripes grew louder from lawyers whose firms scored in the 50s in the RollOnFriday Firm of the Year 2019 survey.

There must have been a computer glitch in the payroll department at Kennedys (59%), because several staff complained that they hadn't had a raise in ages. "NQs got the first pay increase in 8 years in September", said a junior. "I'm told I'm the highest paid non-partner in my team", said a senior lawyer, "but I've no way of checking that and have not had a pay rise for three years". A junior solicitor describes one jolly group, however. "I have never seen the partners so happy", he said, "as when another firm of solicitors went under and they could pick off all the redundant fee earners at a reduced price. God forbid they would have to give others a payrise."

Staff  at DWF (57%) gave out some tips. "You need to negotiate yourself a decent salary when you start the job as there is very little chance of an increase thereafter", said a senior solicitor. "There are always reasons for no increment". The best way to get a pay increase "is to hand in your notice", said a colleague. Others were kinder. "Much better than people might think for a national/wannabe international", said one solicitor.

A lawyer at Baker McKenzie (57%) told of "standard near-shoring shenanigans at work (Belfast office)", but said pay was "good for the market". A lawyer in London said, "Granted we don’t work MC hours, but 5-8% bonuses for senior associates who meet the 1700 hours target is hardly competitive and pretty miserly". "Let's face it", said a trainee, "we're American but we're not". 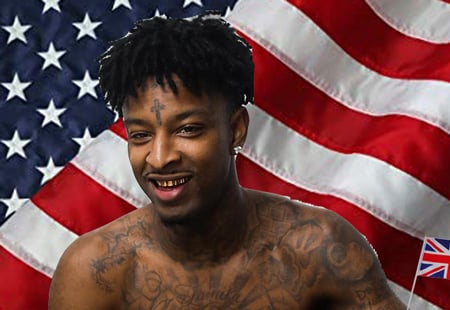 A partner at Watson Farley Williams (55%) reported that the criteria by which salary and points are allocated "remain behind the times", with "too much incentive for partners to look after themselves" rather than adopt a collaborative approach. Underlings complained that there was a "real pay decrease 2017-2018 as pay was frozen", and that "the million variable metrics to afford bonuses are designed so that bonuses aren't paid". Apparently "associates see straight through this and find the bonus system disincentivizing". Although a colleague should perhaps take with a pinch of salt the fact that "numerous recruiters have commented that we are underpaid compared to market rates".

PwC (55%) "utilises time differentials between Big 4 and law firms as only accountants would", said a solicitor, "...which means a 12 month lag". Former Golden Turd Plexus (55%) is doing better than it did, with "very good pay and decent bonus" according to one junior lawyer. "200k and no complaints" said a partner. Although another lawyer said pay "is appalling and inconsistent, but when you bring it up any senior members of staff you are simply told not to discuss your wages with anybody and the conversation ends".

BCLP (54%) would have placed higher if the survey had not opened before a pay rise hit. "The pay review in December 2018 has brought us more in line with market rates", said a junior solicitor. "Recently increased from woefully behind the market to about at par with the market", conceded a peer. "In fairness", said another junior lawyer, "the firm has listened to comments on pay and post-merger there have been improvements to salary and bonus structure". 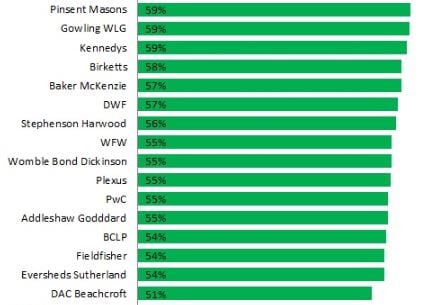 "It makes me want to cry when I know the solicitors on the other side earn double what I do", said a Fieldfisher (54%) junior solicitor. "It's the one thing that continues to mean we lose talent", said a senior solicitor. "Claims of benchmarking against competitors are, at least in my practice area, horseshit. If only the partners could understand this". The firm "is frugal to the point of insult when it comes to trying to retain lawyers (that it genuinely does want to retain)", said a partner. "Dumb".

"My trainees have all left and now all earn substantially better base salaries than I do", mused a junior solicitor at DAC Beachcroft (51%). "It's just a bit shit, isn't it", said a colleague. "For the type of work that this firm does, and the work/home life balance, the pay is good", maintained a partner. But it was "a recipe for discontent", according to a senior solicitor. "Firm is going great guns, PEP is at an all-time high, juniors are ignored if they ask to be paid on a par with peers who work for competitors. Think 'gruel scene' from Oliver Twist".

"[Pay] is appalling and inconsistent, but when you bring it up any senior members of staff you are simply told not to discuss your wages with anybody and the conversation ends". Dangerous game issuing blanket decrees like that, innit? Cos those sorts of rules are unenforceable if you're trying to figure out if you might have been underpaid cos of sex, race, and whatnot, and you've got a victimisation claim if you get penalised for trying to figure out whether you're being paid equally.

Hurrah for being quoted in the ROF survey results! Four years running! Ha!

Lol, cry me a river. Try inhouse where pay hasn't moved in a decade in some sectors.

Own up, arse head. Re-order and apply accordingly