A lawyer has been convicted for assaulting a German fashion designer at the Royal Opera House.

The City of London magistrates court heard how lawyer Matthew Feargrieve was at a performance of Siegfried in October 2018 when he got into a spat with fellow patron Ulrich Engler, a fashion designer.

The dispute occurred when Engler moved into a vacant seat next to Feargrieve's partner, Catherine Chandler, just before the curtain went up. Chandler's coat was on the otherwise empty seat and when Engler asked if he could sit there, Chandler objected. Engler then asked Chandler if she’d paid for the spare seat, to which she replied that she had not.

Engler told the court that he put the coat on Chandler’s lap so he could sit in the seat, but Chandler said that Engler threw the coat on the floor.

When the performance started Engler said he was blindsided by Feargrieve with "very hard" punches to his shoulder. "How dare you talk to my wife like that?" the lawyer said while leaning over Chandler with a "constant flow of blows", the fashion designer told the court.

"I have never seen someone looking with so much anger and terror at me", Engler said. Unlike the opera's protagonist who knows no fear, Engler was entirely cognisant of the concept and was diagnosed with PTSD after the incident.

The battle was not Wagnerian, as Feargrieve was unable to administer a proper clout even to a slender German fashion designer, as he put out his own shoulder while punching Engler. So he would be of little use against a dragon.

Siegfried slays Fafner. How a proper fight should look.

When police were called to the venue, Chandler said that Engler was the aggressor, claiming he had pushed her into Feargrieve causing his arm to dislocate. Officers arrested the fashion designer on suspicion of grevious bodily harm and placed him in a cell overnight. Engler was also banned from the Royal Opera House.

In court, Feargrieve maintained that he'd only pushed Engler and did so in self-defence after Engler "attacked" Chandler. But the prosecution's evidence included witnesses at the opera who had seen Feargrieve punching Engler "at least once, maybe twice or three times".

District Judge John Zani did not accept Feargrieve's evidence or argument of self-defence. He held that events unfolded "in the way Mr Engler recalled" and found Feargrieve guilty of common assault.

Feargrieve will be sentenced in January. The lawyer currently runs his own consultancy but his leitmotif is that of an offshore specialist - he has been a partner at Ozannes, Withers and Appleby.

When RollOnFriday first reported on this story in March this year, one reader's reaction was the comment of the year*:

* Clearly not endorsed by RollOnFriday 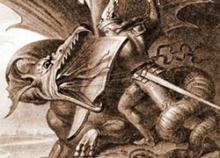 anyone else found ex-Withers people to be overly aggressive, territorial, unable to control themselves and not very bright?