A human rights lawyer has been sentenced to 38 years in jail and 148 lashes in Iran for defending women's rights.

Nasrin Sotoudeh was arrested in June 2018 for committing the grievous crime of acting for women who had been arrested for appearing in public without headscarfs.

Nine charges including spying, "spreading propaganda against the state" and "insulting Iran's supreme leader" were spread across two trials, one of which Sotoudeh was forbidden from attending. 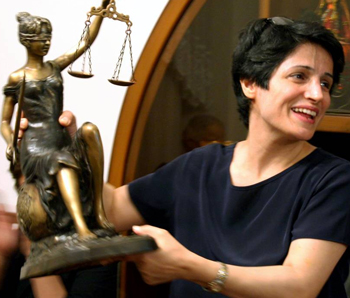 "I can see her hair, and the statue's hair BURN THE WITCHES!"

Sotoudeh's husband, Reza Khandan, wrote on Facebook that while her publicly revealed sentences amounted to 12 years in prison, she has been given decades more, and 148 lashes, for the crimes of "encouraging corruption and debauchery". The campaigning lawyer was previously locked up between 2010 and 2013 for "conspiring to harm state security".

"Nasrin Sotoudeh has dedicated her life to defending women's rights and speaking out against the death penalty," said Philip Luther from Amnesty International. "It is utterly outrageous that Iran's authorities are punishing her for her human rights work."

It is a disgrace that in this day and age we have this kind of thing still going on in the world.

But please let us keep whinging about the imaginary gender pay gap and how hard it is in the western world for women.

Atrocities like this are common place in the middle-east but not a peep from the feminists.

BrieLarson'sFlatDerriere, how about you post your real name, so we can all ensure that you are never employed at any of our firms? Yeah, thought not.

Aren't all countries that have corporal punishment in the modern day backwards?  Middle East, South East Asia etc.  I don't know how our governments take any of them seriously... err money... oh ja sorry, forgot...  At least Iran doesn't have the veneer of sophistication that so many jursidictions that appear outwardly to be developed countries.

@BrieLarson'sFlatDerriere yes because pointing out the very real and very proven gender pay gap, atrocious levels of rape, sexual assault and domestic violence against women in the west really does preclude us from complaining about Nasrin's treatment. In the same way that people researching heart disease should definitely stop doing that and start researching cancer. Because curing one thing will also therefore stop the other*.