A lawyer has been arrested after he fled from a strip club, without paying for his lap dance.

Dylan Vinzant, a US lawyer from Oregon, was at the Sunset Strip Gentlemen's Club in Portland. According to a police report, the lawyer had agreed to pay a stripper $200 for a 15 minute lap dance, but after the private dance he refused to pay her and took off.

The lawyer dashed past bouncers and left the club. But it wasn't a graceful escape as he jumped over a fence and landed in blackberry bushes, cutting his face. 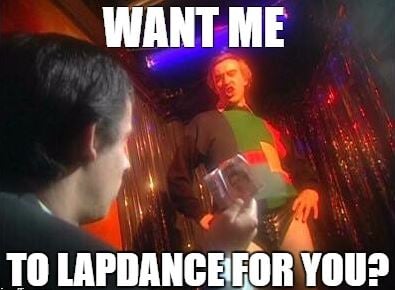 It is not known whether the lawyer will argue misrepresentation

Police were alerted and chased Vinzant. The lawyer tried to evade capture by running across railway tracks and through a train tunnel. However, his time on the run was cut short as officers were waiting for him at the other end of the tunnel.

Vinzant was quick to tell officers that he was a lawyer, and was duly arrested. Police charged Vinzant with theft of services and trespassing. He is set to appear in court.

He is not the first lawyer to have a fondness of strippers, but he may regret not coughing up money for the 15 minute experience.

Absolutely disgraceful behaviour by the lawyer. He should have done the right thing and negotiate the fee rather than doing a runner. But $200 for a 15 minute lap dance? Now wonder US lawyers have obscene salaries.

Should have gone to The Griffin with a pocketful of pound coins.