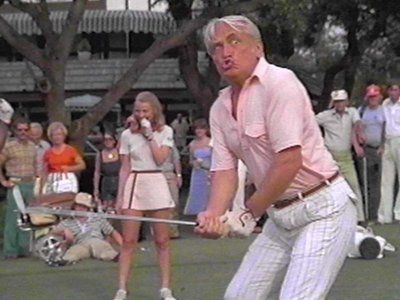 "DLA's partners are not worth more than mine, sir!"

The head of a UK law firm unilaterally bumped up his firm's hourly rates after playing golf with a lawyer from a rival firm, it is claimed.

'Bosso', whom RollOnFriday is not identifying, returned to the office after playing a round with a DLA Piper partner.

Having become convinced on the green that his firm's prices were too low, Bosso announced to staff "without any consultation" that the partners' hourly rates would be increasing to £450 per hour, said a source. They were under £350 in the summer, said the insider.

Meanwhile, the newly-expensive partners have been approached by a former colleague who is suing the firm over another of Bosso's unilateral pronouncements, said a source.

The aggrieved ex-partner is assembling a case for unlawful deduction of wages after Bosso informed staff last year that they would all be taking a Covid-related pay cut.

The partner suing the firm "has asked all existing team leaders to confirm there was no consultation before the pay cut", said a source.

A second ex-partner also sued over the enforced cut and for constructive dismissal, but recently reached a settlement with the firm, said the source, adding that "Morale is awful". Fore!

Guesses in the comments pertaining to the identity of the firm will be handicapped.

Bosso? I wouldn't like to be in his shoes.

It's nice to pretend

Teed off with a smile

But after a while

So I fired off an edict

To show I'd succeeded

Could bare my teeth

Rates may have increased but the GC's sending work out won't agree to them.

Changing rates after discussions with a rival on a golf course sounds to me an awful lot like cartel behaviour.

Bosso lol, Tosso is more apt by the sounds of it.

Does he now tee off and shout

I'll fetch my coat on the way out.

Is this not a serious allegation of collusion in pricing sales of legal services?

I’m sure Bosso will reap the benefits when he’s on the beach rather than in the bunker.

Partners not deciding massive increase in rates, obvs not decision makers in the business I guess if they are working in that sort of model they need to understand they don’t have a committee or meeting  to decide hourly rates ( or anything else for that matter).  re pay cuts, haven’t most paid back deductions?

Does this mean I can put my rate up for next year’s conference?

Love all the clues on the firm and law firm ‘head’

Oh DeeBee you are, always have been and always will be a massive douche

Leaves me in mind of my Dad

Mum too. They were clueless also.

Who is the pretend 3-ducks? Imitation is the highest form of flattery.

It’s all about mindset. If you have the right mindset, you can do anything. Just ask the monkeys.

Bosso, a lone crusader in a dangerous world....

I’ve spent several nights working out who their clients are and which of them won’t pay the new London rates.  I’m now going in for the kill.....

Rich pickings but I'd get in there quick if I were you before all the partners start leaving and taking their shell-shocked clients with them. Especially partners from the more recently acquired firms, whose clients are suddenly going to find themselves forking out double the fees they were paying before for the same work. Good luck!