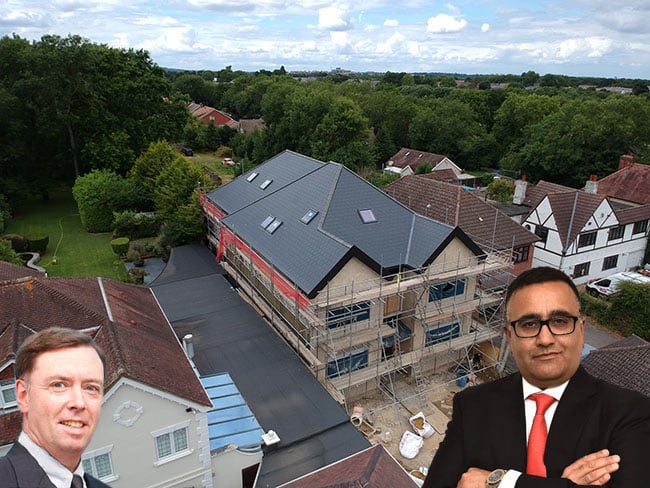 As if he didn't have enough on his plate already, a solicitor due to stand trial for money laundering is embroiled in a furious row with his neighbour over a giant new house.

Albert McGovern, the Managing Director of Snowbird Foods, has accused Sanjay Panesar, the Senior Partner and founder of Rainer Hughes, of overdeveloping land next to his luxury home.

When McGovern bought his £1.6m house, located on one of Dartford's most desirable streets, the plot next door was occupied by a small cottage. But when Panesar won planning permission to knock down the bungalow and replace it with a mansion more befitting the neighbourhood, their relationship soured.

"The new construction is a colossal monstrosity being built practically on the boundary line resulting in towering oppressive walls overshadowing my patio", McGovern complained to the council after his initial objection was dismissed. 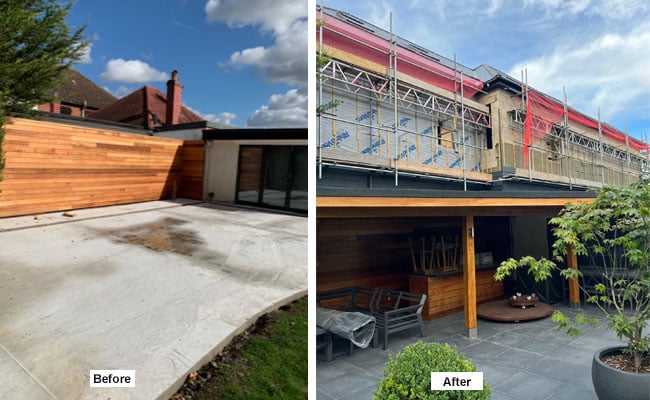 The view from McGovern's garden, now with 80% more brick.

McGovern told RollOnFriday that the solicitor's development had become a nightmare and appeared to be "mutating without any regard to approved plans".

He said the roof had spawned extra windows overlooking his garden, the wall ended 5cm closer to his boundary then planned, leaving a 23cm gap which would hinder maintenance, and there were now "three 360 degree CCTV cameras all pointing at my house and patio".

Dartford Council told McGovern the property's increased footprint was likely to be "a minor breach of planning control" which "is not one which would be expedient for the Local Planning Authority to take action" [sic]. And it said there was still time for builders to obscure the glass in the extra windows and fix them shut.

But its relaxed approach has not satisfied the director. "I object to any windows obscure or not facing my property", said McGovern. "When I sit on my patio or have a meal in my conservatory I want to enjoy the privacy of my own property and not be overlooked or have the invasion of light from windows of the neighbouring property facing mine", he said. 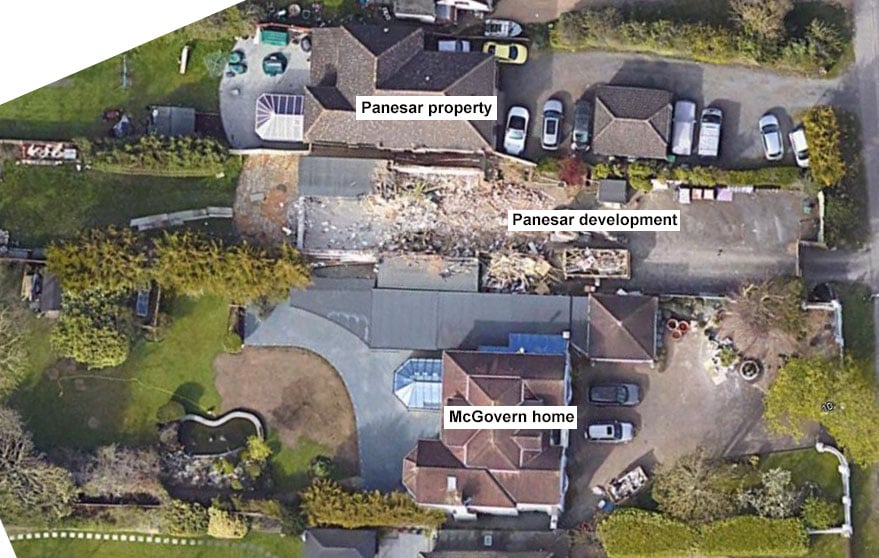 The beginning of the end of cordial relations.

Through his spokesperson, Panesar said, "I'm very saddened that the work on this house has caused such upset and a rift with a neighbour. As far as I was concerned, everything was signed off by the council and I adhered to all of the planning permission, but I'm very disappointed that Mr McGovern has fallen out with me".

Panesar's spokesperson said any extant breaches would be remedied. "All of these complaints made would be valid if the building was complete however it has not been and therefore it is wrong to suggest that planning permission has been breached when work is not complete", he said.

The spokesperson did not respond before RollOnFriday’s deadline when asked to elaborate on a text message sent to McGovern in which Panesar described himself as "the owner of the property". 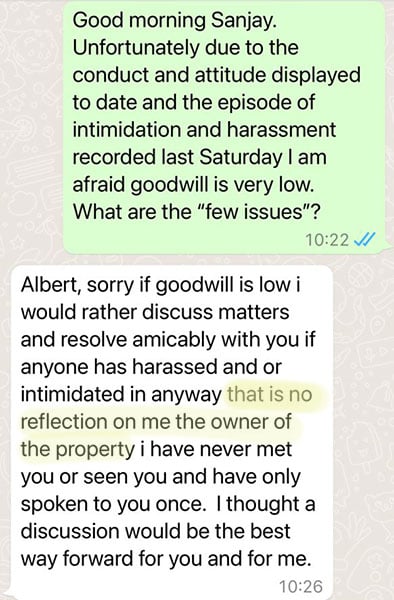 It's fair to say goodwill IS low.

The spokesperson denied that Sanjay Panesar had any connection to the property on the other side of the controversial development, either, claiming it "is completely separate and again has nothing to do with him". He did not respond before RollOnFriday’s deadline when asked whether this was accurate, given that the registered proprietors of the development land and the property next door all appeared to be members of Panesar's family.

A spokesperson for Dartford Borough Council told RollOnFriday it was unable to comment on the record.

"One of Dartford's most desirable streets"..........now there's a contradiction in terms

This chap cannot have it both ways - say he is the owner and then not. Even if the building is slightly further than allowed they should be made to take down the infringement and back to the exact permitted line

"I have never met you or seen you" yet I am building a huge funk-off house right up to your boundary overlooking your garden and don't give a sh!t about you. Sounds very neighbourly, this Panesar chap.

Hope Panesar's got a party wall award or those works will grind to a halt...

If he is not the owner then maybe an offshore vehicle is the owner and he's denying beneficial ownership, the SRA ought to give it a closer look. Rich people and their taxes, ffs. Anyone doing convenacing got an HMLR account to tell us who the registered owner is?

This McGovern chap sounds like he thinks that he owns the whole of the Royal Borough of Dartford LOL.  WANTS NO WINDOWS AT ALL EVEN THOUGH THE COUNCIL HAVE APPROVED THE WINDOWS.  HE MAKES NO SENSE AT ALL....  If the planning department had an issue it would be torn down and they seem to be on the side of his neighbour whoever the owner may be.

It's Dartford Borough Council planning application 19/00346/FUL - from the photos, it looks broadly like the shape of the build is what was authorised, but it authorised a two-, not three-storey property, and the filed plans don't have opening rooflights. Any extension at all or opening windows in that elevation seem to be specifically prohibited under conditions 5 and 6 of the permission anyway...

You'd expect the party wall award to deal with the impact of the development. Where's that pesky third surveyor when you need him, eh?

i just checked the council website and you can see that there is permission for loft lights that has been granted in full under reference 22/00041/VCON decision issued on the 12th April,2022 and it states Approval of variation of condition in respect of new windows to side elevation and loft room with rooflights to pitched roof and provision of rooms within roofspace.  Looks all permitted so not sure what the neighbour is on.....

Cost of living crisis has not reached them

The Snowbird fella had built right up to his own boundary but complains when his neighbours do the same...

Ha a mansion in dartford lol.  Just checked google map the property is reasonable size if you look at the chap mcgoverns place that is moaning his mansion is a mansion  looks like the home to scarface of new york. i guess thats why he is moaning no longer is he lord of the manor.  I am sure the cottage must have been servant quarters or something.

Nice to Sanjay in the comments 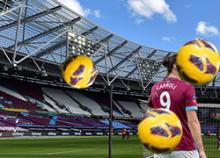