At the bottom of the table for career development, staff lambasted the firms that seem to offer a route to partnership via quicksand.

Eversheds Sutherland (57%) "promises a lot, rolls out lots of new development programmes and makes the right noises" according to a senior lawyer but it "always relies on the partners to actually do something, and they don't". A junior lawyer thought that the "move from associate to senior associate seems fair and appropriate" but that "issues" arise at "the next two steps: from senior associate to principal associate to partner".

Shipping firm Clyde & Co (55%) got a keelhauling from its associates who commented about the lack of development. One senior solicitor said that "requirements for career progression remain opaque" and "if you can get any answers out of anyone who might know (partners, HR etc.), the answers tend to conflict with other information from other sources". She added "if you work for a partner who prefers to have you slogging away billing for him, then you can expect to be fobbed off for as long as they can get away with it". A junior lawyer felt this was having an effect on morale as "4+PQE lawyers seem to be dropping like flies in some teams". He opined that "in some departments you can say it'd be easier to unite the Tory party behind May's deal than make partner".

Associates were also fuming at another shipping firm, HFW (53%), where a senior lawyer said that he felt there was a "better chance of winning the lottery" than progressing at the firm. Another lawyer said "the amount you have to bring in to justify being made a partner is prohibitive and the expectation and pressure on junior partners is huge with seemingly very little support given if you’re struggling". However, a trainee not yet jaded by the HFW experience said that there are "great opportunities for client secondments and overseas trips" and "invitations to client events". 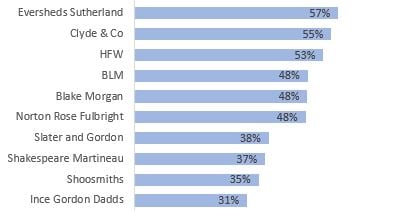 "Those who succeed do so on favouritism and sucking up to bosses, not on ability" said a junior lawyer at BLM (48%). However, a senior lawyer felt that "a lot of promotions seem to be happening" although conceded this was "mostly where people might leave". Another lawyer suggested that "the last time the Liverpool office made up a partner to equity, the Soviet Union still existed." She added that the situation was not helped by Slater and Gordon staff being brought in "who have different titles to the rest of us. Now BLM associates sit alongside S&G senior associates...always comfortable."

A Slater & Gordon lawyer is welcomed to BLM

"Promotions are not easily given" said a senior solicitor at Norton Rose Fulbright (48%). A junior lawyer said that there is "little to no interest on the development of associates from partners". Another lawyer was perturbed that progression meant a drop in salary: "somehow my promotion to Of Counsel was accompanied by an effective pay cut."

At bottom-of-the-table Ince Gordon Dadds (31%), a lawyer said progression was "non-existent". A trainee said that "formal training" focused on "soft skills" without basic legal training and "ultimately lawyers should know the law."

A lot of "outside talent" wheeled into the partnership at NRF - there appears to be barely any interest in bringing up associates. If you want to make partner from associate, you better be ready to grow a lot of grey hairs

NRF, a firm that prides itself on its culture.  But that culture now only serves the dead wood.

A petri dish growing syphilis has a better culture than NRF. NRF is a kakistocracy hoping the Dutch tulip market will cover their position on South Sea Company stocks.