Skip to main content
Squeeze the oligarchs until the pips squeak

I last wrote about the plague of Russian oligarchs in 2015. They were repulsive then, they are repulsive now. Mikhail Fridman, one of their more famous number, conceded this week that war was a bad thing but refused to blame Putin. He did, however, blame the EU for sanctioning him and said that he will take legal action.

Well, he won’t if he can’t get a half-way decent law firm to act for him. Yesterday, Jamie broke the news that Ashurst has refused to take on any new Russian clients and will cease to take on instructions from its current ones. I disclose the interest that the firm is my alma mater (albeit a long time ago), but that is absolutely banging. If I were wearing a hat I’d take it off to them. The President of the hopeless Law Society bleats that ‘it’s the job of solicitors to represent their clients, whoever they may be’. No it’s not, not against a landscape like this. Ashurst has stolen a march on other City firms who will surely follow suit (particularly now Tory MP Bob Seely has used parliamentary privilege to name and shame the worst perpetrators).

Putin, strong like bear (although presumably also hung like mouse) won’t care less. He places little if any value on the lives and happiness of his own people, even if they are billionaires. Fridman complains that Russia is a dictatorship and sanctioning him and his mates won’t stop his psychopathic President from doing whatever he wants. He’s wrong. 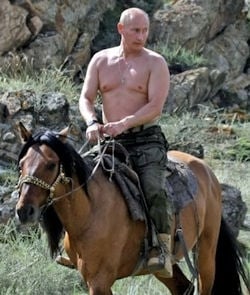 The civilised world should sanction the oligarchs’ collective arse as hard as it can. Freeze their accounts, confiscate their football clubs, PNG the lot of them. See how they get on stuck in Moscow, without their Kensington mansions full of Picassos, hookers and blow, unable to travel anywhere or access their billions. I’m guessing that in pretty short order they’ll want a resolution to this mess. That resolution won’t come from Putin, who would rather see Russia sink lower than North Korea than climb down and de-escalate. It won’t come from the average Russian. I feel for them, plunged into a war they don’t want by a president they didn’t vote for, watching their mortgages double overnight, their savings eroding to nothing and their sons returning in body bags. But they can’t do anything. It appears that if anyone so much as mutters ‘Ukraine’ on a Moscow street, a bunch of goons in riot gear will immediately descend upon them and drag them to the Lubyanka. The resolution can only come from the oligarchs themselves, who will run out of patience and decide to depose him in a night of the long knives. Or maybe even slip him some of his own novichok.

Rumour has it that the most likely pretender to the throne is Igor Sechin, and some reckon he's even worse than Putin. I’ll take my chances. This nightmare won’t come to an end until Putin is out of office or six feet under. The oligarchs can make both those things happen, and if City law firms can play some small part in making life unbearably uncomfortable for them and force their hand, then three cheers.

You are spot on, Matthew. I see A&O has just done the same. By the time you publish on Friday surely the entire City will have got in line.

Absolutely spot on. Some firms are doing the right thing - e.g. Dutch firm Houthoff has decided to terminate its relationship with the Russian Federation as well as with associated persons and companies. Some are not, it seems, particularly in Londongrad.  E.g., it's telling how some firms hide behind what a lay person would describe as the usual "lawyering language"... Take these firms, with the quotes from the Lawyer's blog (https://www.thelawyer.com/live-blog-crisis-deepens-between-russia-and-ukraine/?cmpid=dnews_25430412&utm_medium=email&utm_source=newsletter&utm_campaign=dnews&adg=PNILwpWZ8qsvyr8):

Pinsent Masons has said its mandates involving Russian entities is “minimal”. A spokesperson said: “We do not have a presence in Russia and the number of our existing mandates that involve Russian entities is minimal, however we are reviewing these to determine whether we should continue to act.”
- "Minimal" can still be very significant and the firm says nothing re. new instructions and do not condemn Putin's invasion.  And the firm is "reviewing"... translation: "we'll look at this for one second and then pretend to be looking into it for the next century without doing anything".  Ironic for a firm who claims to be "Purpose-led" and have values such as "Do The Right Thing"...

Allen & Overy looked promising with saying the firm "condemns Russia’s actions" and saying they “are reviewing our Russia-related portfolio, and as a result we will refuse new instructions and stop all Russia-linked work that goes against our values" - but note the caveat "that goes against our values".  Please confirm your values are not simply "make as much profit as possible"....

I could not agree more. And good on you, RoF, for holding firms’ feet to the flames on this. I know it’ll take a bit of work, but I hope you are chasing all the major City outfits and holding them to account on this. Name and shame, their clients will vote with their feet, make a change.

Yes great to see this festival of virtue signalling continuing.  Which other nationalities are these firms going to cancel?  Shall we start with the Saudis? How about the Chinese? Are are Russia a special case and uniquely bad?